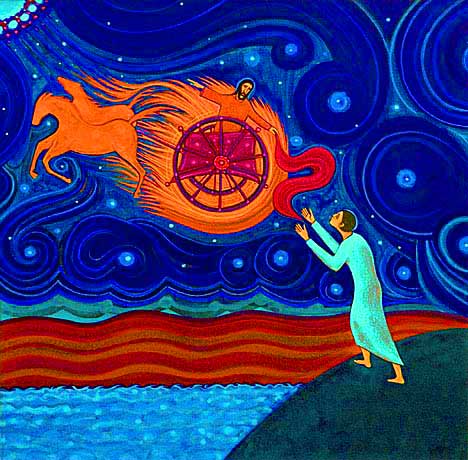 IN our day, I believe God has placed the “mantle” of the prophet of Elijah on many shoulders throughout the world.  This “spirit of Elijah” will come, according to Scripture, before a great judgment of the earth:

Much has been done in the past century to divide children from their fathers. While many sons and daughters grew up on farms working alongside their parents, today’s industrial and technological age has driven families into the city, parents into the workplace, and children, not only into schools all day long, but into daycares where the influence and presence of their parents is virtually nil. Dads, and often the mother too, spend long hours at work just to make ends meet, or else, excessive time away from home in pursuit of success and greater material wealth.

Radical feminism has done much to emasculate fatherhood. The role of the father has been reduced from spiritual leader to simple provider, and worse, a superfluous entity within the home.

And now, the systematic push to create cultural acceptance of redefined sexuality and marriage is throwing even more confusion into the value and necessity of mature spiritual manhood in the family, Church, and world at large.

…when… fatherhood does not exist, when it is experienced only as a biological phenomenon without its human and spiritual dimension, all statements about God the Father are empty. The crisis of fatherhood we are living today is an element, perhaps the most important, threatening man in his humanity. The dissolution of fatherhood and motherhood is linked to the dissolution of our being sons and daughters.  —POPE BENEDICT XVI (Cardinal Ratzinger), Palermo, March 15th, 2000

That’s what has happened and continues to happen in the world. But something else is taking place quietly within a portion of the Church…

It would seem to me that God has released the prophetic spirit of Elijah into our world; in the past 15 years or so, movements such as St. Joseph’s Covenant Keepers (Promise Keepers is the Protestant version) have been effective in restoring spiritual fatherhood in the family. God has also raised powerful evangelists and preachers, both layman and clerical, who have exhorted men to repent of ungodliness and to be better witnesses to their wives and children.

There has also been a growing homeschooling movement where parents are feeling called to spend more time forming their children, not just with math and english, but with their simple presence. The Church has also raised its voice in this area, reaffirming parents’ role as the “first” and primary educators of their children.

And in a fresh movement of the Spirit, there is a strong word growing in many hearts calling them to a life of simplicity. It is a life more removed (if not far removed) from the materialistic quests of the world, less integrated in worldly systems, and in some cases, removed from the infrastructure (power grid, natural gas, city water etc.) It is a call to “Come out of Babylon,” or as author Michael O’Brien put it recently, ‘global Babylonian captivity’—a bondage to the illusory consumeristic and materialistic demands of the world.

Jesus said that one of the signs that a future generation will have arrived at “the days of the Son of Man” is that those times will be “as it was in the days of Noah” (Luke 17:26) And what happened just prior to that great day of judgment when God flooded the earth? He gathered Noah and his family into the refuge of the ark. The days of Noah and the days of Elijah are one and the same: fathers’ hearts will be turned towards their children, and these families will be gathered together into the Ark of the New Covenant, the Blessed Virgin Mary. This would be a sign that we are entering into the proximate period when the time of grace would come to an end, and chastisement, “the day of the LORD,” would soon befall an unrepentant world.

This sign of our times carries even more significance when we consider that many families, some which I have met during my concert tours through Canada and the United States recently, have been called to live in close proximity to other families. Perhaps these are the “sacred refuges” that I wrote of in Trumpets of Warning–Part IV. The most striking factor that unites these families is that they all felt this call to move their families at the same time, independent of one another. The call came swiftly. It was strong. It was urgent.

I have witnessed this in several places… and am experiencing it myself.

God is gathering His people.

Very shortly after writing this meditation, a glorious rainbow suddenly formed over the place where my family (and several others) feel called to move, and remained a very long time (we are parked here in our tour bus). Yes, God promises that after the coming storm, a wonderful period of peace will be born when faith, hope, and love will flourish. I believe Jesus spoke of that coming Era of Peace when He said:

Elijah does come first [before the Final Resurrection] to restore all things. (Mk 9:12)