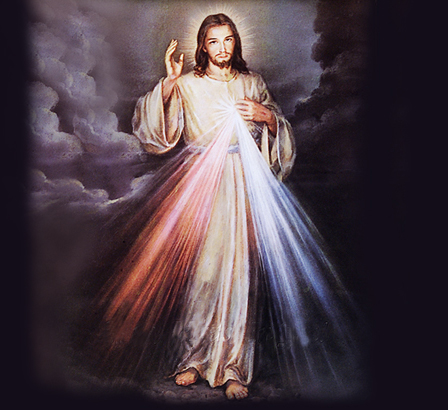 THOSE who have read and meditated upon the message of Mercy that Jesus gave to St. Faustina understand its significance for our times.

You have to speak to the world about His great mercy and prepare the world for the Second Coming of Him who will come, not as a merciful Savior, but as a just Judge. Oh, how terrible is that day! Determined is the day of justice, the day of divine wrath. The angels tremble before it. Speak to souls about this great mercy while it is still the time for [granting] mercy. —Virgin Mary speaking to St. Faustina, Diary of St. Faustina, n. 635

What I want to point out is that the Divine Mercy message is inextricably tied to the Eucharist. And the Eucharist, as I wrote in Meeting Face to Face, is the centerpiece of St. John’s Revelation, a book which intermingles Liturgy and apocalyptic imagery to prepare the Church, in part, for the Second Coming of Christ.

THE THRONE OF MERCY

Before I come as a just judge, I am coming first as “King of Mercy”! Let all men now approach the throne of my mercy with absolute confidence!  —Diary of St. Faustina, n. 83

In several visions, St. Faustina saw how the the King of Mercy manifested Himself to her in the Eucharist, interchanging the Host with an apparition of Himself with rays of light coming from His heart:

…when the priest took the Blessed Sacrament to bless the people, I saw the Lord Jesus as He is represented in the image. The Lord gave His blessing, and the rays extended over the whole world. —Diary of St. Faustina, n. 420

The Eucharist IS the throne of Mercy. It seems right that the world will have an opportunity to repent through an invitation to this throne before the days of justice arrive “like a thief in the night.”

During a time of prayer recently before the Blessed Sacrament, a friend of mine who is a well known Catholic author, had a similar vision of rays of light coming from the Eucharist. When she spoke this out, I saw in my own heart people reaching up with their hands to touch these rays and experiencing tremendous healing and graces.

One evening as I entered my cell, I saw the Lord Jesus exposed in the monstrance under the open sky, as it seemed. At the feet of Jesus I saw my confessor, and behind him a great number of the highest ranking ecclesiastics, clothed in vestments the like of which I had never seen except in this vision; and behind them, groups of religious from various orders; and further still I saw enormous crowds of people, which extended far beyond my vision. I saw the two rays coming out from the Host, as in the image, closely united but not intermingled; and they passed through the hands of my confessor, and then through the hands of the clergy and from their hands to the people, and then they returned to the Host… —Ibid., n. 344

The Eucharist is the “source and summit of the Christian faith” (CCC 1324). It is to this Source that Jesus will lead souls in the final hour of mercy for the world. If the message of Divine Mercy is to prepare us ultimately for the Second Coming of Christ, the Eucharist, which is the Sacred Heart of Jesus, is the source of that Mercy.

When we went to the Jesuits’ place for the procession of the Sacred Heart, during Vespers I saw the same rays coming forth from the Sacred Host, just as they are painted in the image. My soul was filled with great longing for God.  —Ibid. n. 657

The Eucharist, the Lamb of the Apocalypse, the Divine Mercy Image, the Sacred Heart… they are a powerful convergence of themes, all of them key signs in preparing the world for the “latter times.” Maranatha! Come Lord Jesus!