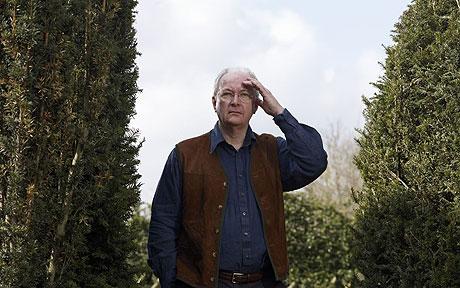 I AWOKE at 5:30 this morning, the wind howling, snow blowing. A lovely spring storm. So I threw on a coat and a hat, and headed out into the blistering winds to save Nessa, our milk cow. With her safely in the barn, and my senses rather rudely awakened, I wandered into the house to find an interesting article by an atheist, Philip Pullman.

With the swagger of one who hands in an exam early while fellow students remain to sweat over their answers, Mr. Pullman briefly explains how he abandoned the myth of Christianity for the reasonableness of atheism. What caught my attention most, though, was his answer to how many will argue that Christ’s existence is evident, in part, through the good His Church has done:

However, the people who use that argument seem to imply that until the church existed no one ever knew how to be good, and no one could do good now unless they did it for reasons of faith. I simply don’t believe that. —Philip Pullman, Philip Pullman on the Good Man Jesus & The Scoundrel Christ, www.telegraph.co.uk, April 9th, 2010

But the essence of this statement is puzzling, and in fact, presents a serious question: can there be a ‘good’ atheist?

Pontius Pilate asked, “What is truth?” But as my morning coffee cools and the winds peel the shingles off my webcast studio, I ask “What is goodness?”

What does it mean to say this or that person is good, or this or that person is bad? Generally, society discerns goodness by that behavior it deems good, or badness by behaviors which are deemed bad. Helping a blind man cross the street is generally deemed good; intentionally running him over with your car is not. But that’s an easy one. At one time, sleeping with someone before marriage was deemed immoral , but now, it’s not only acceptable, but encouraged. “You need to make sure you’re compatible,” say the pop psychologists. And then we have the morbid irony of famous people telling us that killing owls is bad, but killing unborn babies is good. Or scientists who say that destroying human embryos is good if it ends up providing cures for other humans. Or judges who will protect homosexual activity, and yet move to hamper parents from teaching traditional sexuality to their children.

So, it’s clear there is a shifting happening here. What was deemed good in the past is now often considered tyrannical and oppressive; that which was evil is now being embraced as good and liberating. It is correctly called a…

Mr. Pullman believes that people can do good without the Church. But what is ‘good’?

Mr. Pullman states that he began to awaken from the myth of Christianity ‘after I’d learnt a little science.’ Indeed, science is the central religion of atheism, which flattens the human horizon to merely that which can be touched, tasted, seen, and tested.

Thus, evolution is one of the main tenets of the atheist’s beliefs. It was for Hitler. And now we see the problem presenting itself.

Following an atheist’s logic, there cannot be moral absolutes. Moral absolutes imply an infallible source of those absolutes. They imply an unshifting moral order rooted in a foundation. But’s it’s clear today that what was once considered absolutes derived from natural law—such as thou shalt not murder—are no longer absolutes. Abortion, assisted suicide, euthanasia… these are new “morals” that are in conflict with what has always been deemed natural law held between cultures and millennia.

And thus, Hitler merely applied these new “morals” to the classes of persons he found unsuitable to the human race. I mean, if we are merely a species among many species on earth that are evolving by means of adaptation and natural selection, why not use our intelligence to facilitate natural selection? 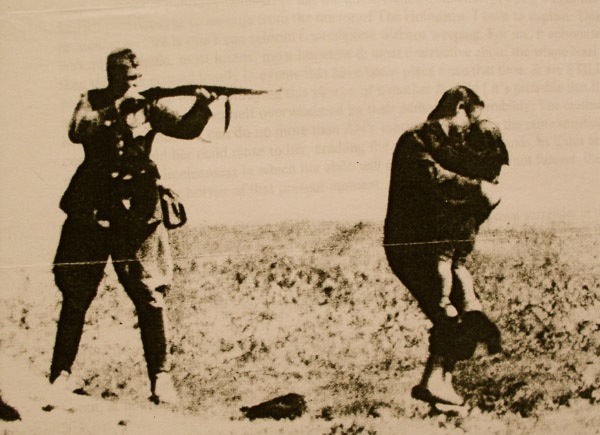 Now, an atheist might argue and say, “No, we can all agree that the systematic elimination of the Jews was immoral.” Really? What, then, about the systematic elimination of the unborn, or those who really want to die? And what will we do in the face of a real crisis where health care or food is scant? In the United States, for example, the health care debate included discussions about the elderly being the last to receive health care in a crisis. So who makes those decisions and based on what “moral code?” That is the unshifting question with a shifting answer.

Is it wrong to eliminate classes of people who are “dead weight”, non-contributors to the economy, “useless eaters”, as some say? Because if you follow the science, applying reason without faith, then it makes a lot of sense to apply the principles of evolution wherever we can to help the process along. Billionaire Ted Turner once said the earth’s population should be reduced to 500 million people. England’s Prince Philip said he would like to be reincarnated as a killer virus and suggested that large families are a scourge to the planet. The value of a human person is already being measured not by their inherent dignity but by the “carbon footprint” they leave behind.

So atheists who suggest people like Hitler are “bad” shouldn’t let their beliefs stand in the way of “human progress.”

Many of us have heard of, or know ourselves of people who are not churchgoers, but are “good” (by a Judeo-Christian definition). And it’s true: there are many servants out there, many kind people, souls who would give the shirt off their backs… but who want nothing to do with religion. It might surprise atheists like Mr. Pullman to hear what the Church teaches about some of these people:

Those who, through no fault of their own, do not know the Gospel of Christ or his Church, but who nevertheless seek God with a sincere heart, and, moved by grace, try in their actions to do his will as they know it through the dictates of their conscience — those too may achieve eternal salvation. —Catechism of the Catholic Church, n. 847

However, this does not mean that the Church is thus irrelevant.

“Although in ways known to himself God can lead those who, through no fault of their own, are ignorant of the Gospel, to that faith without which it is impossible to please him, the Church still has the obligation and also the sacred right to evangelize all men.” —CCC, n. 848

The reason being is that Jesus came to set humanity free, and it is truth which sets us free. The Church, then, is that mouthpiece and gateway of truth.

[Jesus] himself explicitly asserted the necessity of faith and Baptism, and thereby affirmed at the same time the necessity of the Church which men enter through Baptism as through a door. Hence they could not be saved who, knowing that the Catholic Church was founded as necessary by God through Christ, would refuse either to enter it or to remain in it. —CCC, n. 846

Jesus said, “I am the truth.” And so, it only makes sense that souls who follow the “truth” written in their hearts, even though they do not know Him by name through no fault of their own, are on a path of eternal salvation. But given our fallen natures and inclination toward sin, how hard it is to follow along this path!

Here then is the blind spot of well-meaning but, well, blind atheists such as Philip Pullman: they cannot see that truth is absolutely necessary for the survival of humanity. That moral absolutes are the sure foundation for peace and harmony, and that the Church is the assurance and vessel of this truth. The greatest weakness of many atheists is their inability to look beyond the weakness and sins of the Church. They expect too much from human beings and not enough from Jesus. I don’t know why, but, though deeply grieved, I am not rattled by all the Church’s history of abuses, scandals, inquisitions, and corrupt leaders. I look into the mirror, into the fallibility of my own heart, and I understand. I think it was Mother Teresa who said that the capacity for war lay in every human heart. When we accept this fact—atheist, Jew, Muslim, or Christian—that human beings are incapable of solving the mystery of their own capacities for evil apart from the power of the Resurrection, then we will continue to float along the swamp of moral relativism. We will continue until, some day, a “good atheist” may take power who will make Hitler and Stalin appear rather docile in comparison. (That is, the blind man might want to stay home).

But who are we to judge!

Posted in HOME, A RESPONSE, FAITH AND MORALS.