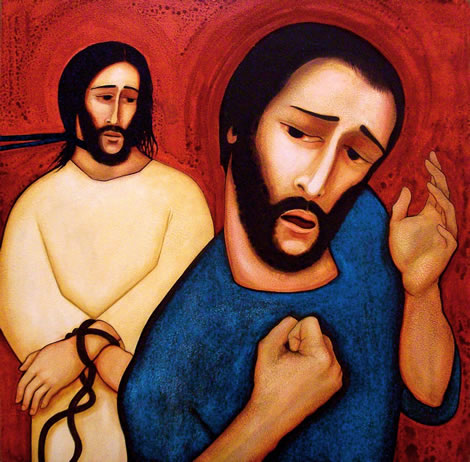 ONE of the greatest dangers to the Christian life is the desire to please people rather than God. It is a temptation that has followed Christians since the Apostles fled the garden and Peter denied Jesus.

Likewise, one of the greatest crises in the Church today is the real lack of men and women who courageously and unashamedly associate themselves with Jesus Christ. Perhaps Cardinal Ratzinger (Benedict XVI) gave the most compelling reason as to why more and more Christians are abandoning the Barque of Peter: they are caving into a…

In a word, many don’t want to be seen as “fundamentalists”, that is, taking a firm position on anything. We hear people who say, “I am personally against abortion, but I don’t force my opinion on others…”, or, “I’m neutral on the whole gay thing,” or, “My faith is personal—you can believe what you want.” This, of course, is a veiled attempt to hide cowardice and appear “tolerant.”

In today’s first reading, St. James points out a rather bizarre irony: why, he asks, are you appeasing the very people who would persecute you?

Are not the rich oppressing you? And do they themselves not haul you off to court? Is it not they who blaspheme the noble name that was invoked over you?

When we are silent on moral issues so as not to ruffle the feathers of unbelievers, we are actually empowering them to oppress all Christians when someone does speak up.

On the other hand, I think there are many Catholics who are in fact comfortable asserting the moral truths of our faith… but are speechless when it comes to talking about Jesus Himself. Do you speak His name in public? Are you afraid to share how He has touched you, changed you, healed you? Do you share His words with others? Do you propose Him as the Savior… or as an option among many, such as in the Gospel?

“Who do people say that I am?” They said in reply, “John the Baptist, others Elijah, still others one of the prophets.”

Who do you say Jesus is? Because if you believe who He says He is—God, Creator, Savior—then how can you not speak of Him?

Whoever is ashamed of me and of my words in this faithless and sinful generation, the Son of Man will be ashamed of when he comes in his Father’s glory with the holy angels. (Mark 8:38)

This is precisely what Pope Francis is challenging the Church to once again, to proclaim its “first love”: Jesus.

The church’s pastoral ministry cannot be obsessed with the transmission of a disjointed multitude of doctrines to be imposed insistently…. The proposal of the Gospel must be more simple, profound, radiant. It is from this proposition that the moral consequences then flow. —POPE FRANCIS, AmericaMagazine.org, Sept. 30, 2013

The Pope is calling every Catholic to a renewed encounter with Jesus [1]cf. Evangelii Gaudium, n. 3 that in turn compels us to bring Him to others.

But it is tempting to keep one’s lamp hidden beneath the bushel basket, is it not? Everyone’s happy. There is less debating and arguing. Everyone’s tolerating each other… or so it all seems. In truth, a people in darkness are a people deprived of true peace, of light—and this only leads to more darkness in individuals, families, and nations. Is this not evident, that as the flame of faith is going out in the world, immorality and evil are spreading exponentially? Jesus said, “You are the light of the world… Just so, your light must shine before others.” [2]cf. Matt 5:14 The light that must shine before others is not only our deeds, but also the proclamation that Jesus Christ is Lord; that He is merciful, loving, and the personal Savior of every individual.

…otherwise even the moral edifice of the church is likely to fall like a house of cards, losing the freshness and fragrance of the Gospel. —POPE FRANCIS, ibid.

If you and I are ashamed, if we are afraid to speak up, to proclaim Jesus “in season and out,” [3]cf. 2 Tim 4:2 then our fear can be counted in lost souls—and we in turn will have to give an account of our silence on Judgment Day.

The most important question then is, why am I ashamed to speak of Jesus? Or rather, how do I overcome this fear? The answer is to fall more deeply in love with Him. As it says in the Psalm today:

I sought the LORD, and he answered me and delivered me from all my fears… Look to him that you may be radiant with joy, and your faces may not blush with shame.

“Perfect love drives out all fear”, said St. John. When we follow Jesus, renouncing self-love, we make room for Him who is love… and fear begins to evaporate like snow in the springtime.

For God did not give us a spirit of cowardice but rather of power and love and self- control. So do not be ashamed of your testimony to our Lord… (2 Tim 1:7)

That is the key to the zeal of the saints and courage of the martyrs: He was and is their strength.

For I am not ashamed of the gospel. It is the power of God for the salvation of everyone who believes… I am not ashamed, for I know him in whom I have believed and am confident that he is able to guard what has been entrusted to me…. (Rom 1:16, 2 Tim 1:12)