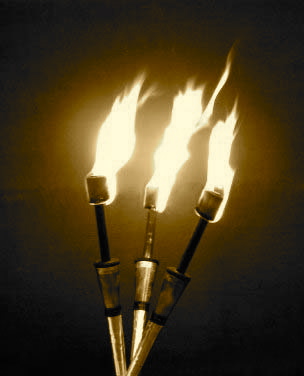 PRAYER is an invitation to a personal relationship with God. In fact,

…prayer is the living relationship of the children of God with their Father… —Catechism of the Catholic Church (CCC), n.2565

But here, we must be careful that we do not consciously or unconsciously begin to view our salvation as merely a personal matter. There is also the temptation to flee the world (contemptus mundi), hiding until the Storm passes, all the while others perish for lack of a light to guide them in their own darkness. It is precisely these individualistic views which dominate modern Christianity, even within fervent Catholic circles, and has led the Holy Father to address it in his latest encyclical:

How could the idea have developed that Jesus’s message is narrowly individualistic and aimed only at each person singly? How did we arrive at this interpretation of the “salvation of the soul” as a flight from responsibility for the whole, and how did we come to conceive the Christian project as a selfish search for salvation which rejects the idea of serving others? —POPE BENEDICT XVI, Spe Salvi (Saved In Hope), n. 16

I have often been led to qualify events and future events in our times as being "great." For example, "The Great Meshing" or the "The Great Trials." There is also what the Holy Father calls "the great hope." And it is this which is the primary vocation of each of us who bears the title "Christian":

Hope in a Christian sense is always hope for others as well. —POPE BENEDICT XVI, Spe Salvi (Saved In Hope), n. 34

But how can we share this hope if we do not possess it ourselves, or at least realize it? And this is why it is necessary that we pray. For in prayer, our hearts our filled more and more with faith. And…

Do you see where I am going with all this? Without hope in the coming darkness, there will be despair. It is this hope within you, this light of Christ burning like a torch on a hillside, which will draw despairing souls to your side where you may point them to the Jesus, the hope of salvation. But it is necessary that you have this hope. And it does not come from simply knowing that we live in times of dramatic change, but from knowing Him who is the author of change.

Always be ready to give an explanation to anyone who asks you for a reason for your hope. (1 Pet 3:15)

Often, particularly in the face of trials and spiritual dryness, you may not feel like you have faith or even hope. But herein lies a distortion of what it means to "have faith." Perhaps this notion has been influenced by evangelical sects who twist the Scriptures to their own liking—a "name it and claim it" theology in which one must work into a lather one’s "faith," and thereby receive whatever it is one desires. This is not what it means to have faith.

In what is a monumental clarification of a misinterpreted Scripture, the Holy Father explains the following passage of Hebrews 11:1:

Faith is the substance (hypostasis) of things hoped for; the proof of things not seen.

This word "hypostatis" was to be rendered from the Greek into Latin with the term substantia or "substance." That is, this faith within us is to be interpreted as an objective reality—as a "substance" within us:

…there are already present in us the things that are hoped for: the whole, true life. And precisely because the thing itself is already present, this presence of what is to come also creates certainty: this “thing” which must come is not yet visible in the external world (it does not “appear”), but because of the fact that, as an initial and dynamic reality, we carry it within us, a certain perception of it has even now come into existence. —POPE BENEDICT XVI, Spe Salvi (Saved In Hope), n. 7

Martin Luther, on the other hand, understood the term, not in this objective sense, but subjectively as an expression of an interior attitude. This interpretation has crept into Catholic biblical interpretations where in modern translations the subjective term "conviction" has replaced the objective word "proof." However, it is not as accurate: I hope in Christ because I already possess the "proof" of this hope, not just a conviction.

This faith and hope is a spiritual "substance." It is not something I work up by mental arguments or positive thinking: it is a gift of the Holy Spirit given in Baptism:

He has put his seal upon us and given us his Spirit in our hearts as a guarantee. (2 Cor 1:22)

But without prayer, drawing the sap of the Holy Spirit from Christ the Vine into my soul, the gift can become obscured by a dulled conscience or even lost through rejection of the faith or mortal sin. Through prayer—which is a communion of love—this "substance" is increased, and thus, so too is my hope:

Hope does not disappoint us, because God’s love has been poured into our hearts through the Holy Spirit which has been given to us. (Rom 5:5)

This substance is the "oil" with which we fill our lamps. But because the substance is Divine in origin, it is not something you can acquire by willpower alone as though God were a cosmic vending machine. Rather, it is by becoming a child of humility and seeking first the kingdom of God above all else, especially through prayer and the Holy Eucharist, that the "oil of gladness" is richly poured into your heart.

So you see, Christianity is a journey into the supernatural,
or rather, the Supernatural journeys into the soul: Christ comes with the Father into the heart of the one who does His will. When this happens, God changes us. How can I not change when God makes His home within me and I become a temple of the Holy Spirit? But as I wrote in Be Resolved, this grace does not come cheaply. It is released through a continual surrendering of oneself to God (faith). And the grace (hope) is given, not only for ourselves, but for others as well:

To pray is not to step outside history and withdraw to our own private corner of happiness. When we pray properly we undergo a process of inner purification which opens us up to God and thus to our fellow human beings as well… In this way we undergo those purifications by which we become open to God and are prepared for the service of our fellow human beings. We become capable of the great hope, and thus we become ministers of hope for others. —POPE BENEDICT XVI, Spe Salvi (Saved In Hope), n. 33, 34