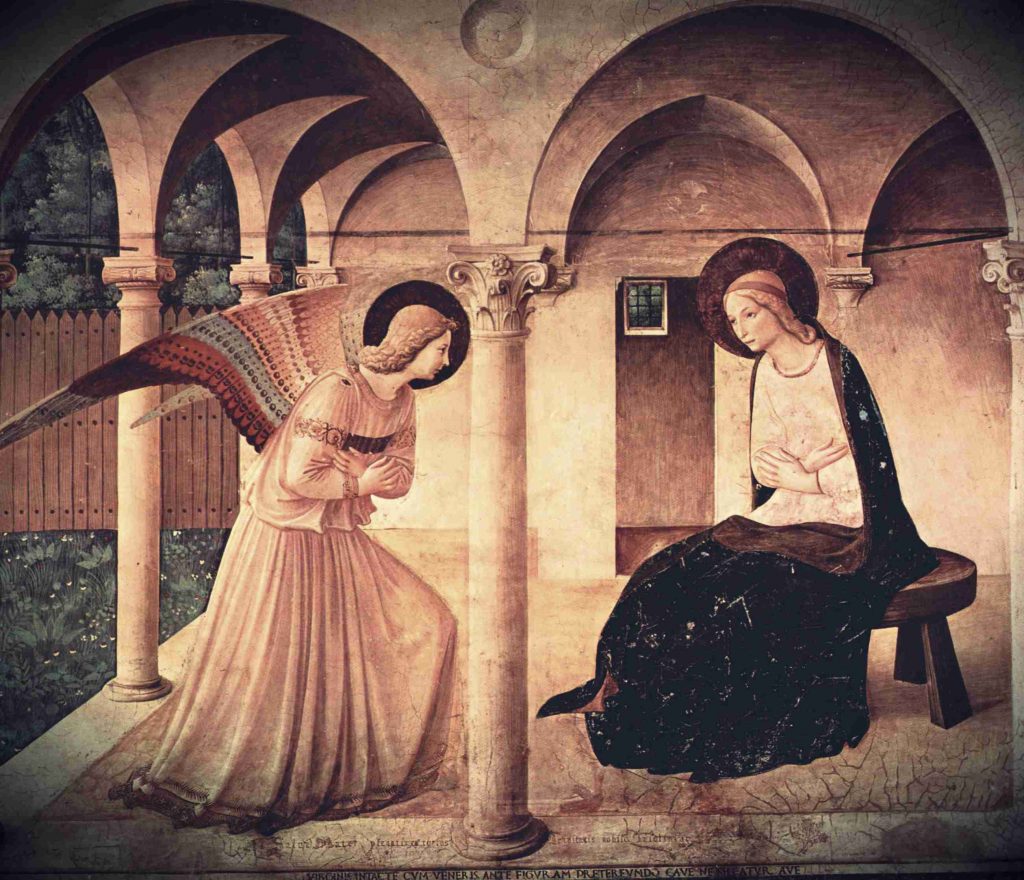 The Annunciation, by Henry Ossawa Tanner (1898; Philadelphia Museum of Art)

AND so, we have arrived at the days in which great changes are imminent. It can be overwhelming as we watch the warnings which have been given begin to unfold in the headlines. But we were created for these times, and where sin abounds, grace abounds all the more. The Church will triumph.

Along with Mary, the Church today is the Woman of Revelation laboring to give birth to a son: that is, the full stature of Christ, both Jew and Gentile.

The mutual relationship between the mystery of the Church and Mary appears clearly in the “great portent” described in the Book of Revelation: “A great portent appeared in heaven, a woman clothed with the sun, with the moon under her feet, and on her head a crown of twelve stars.” —POPE JOHN PAUL II, Evangelium Vitae, n.103 (Rev 12:1)

Here again we are presented with the relational mystery of the Woman-Mary and the Woman-Church: it is a key to understanding the days we live in, and the importance of her extraordinary apparitions—a “great portent”—which have allegedly occurred now in hundreds of countries. It is also a key to understanding what our response should be in the face of this final confrontation between the Woman-Church and the anti-Church, the Gospel, and the anti-Gospel.

In his recent encyclical, the Holy Father said:

What we say of Mary is mirrored in the Church; what we say of the Church is reflected in Mary. When you really begin to meditate on this truth, you see that the Church, and conversely Mary, are written on nearly every page of Scripture.

When either is spoken of, the meaning can be understood of both, almost without qualification. —Blessed Isaac of Stella, Liturgy of the Hours, Vol. I, pg. 252

In this light, the shape of the Church’s mission and her response to the new evils it faces gathers new dimension and direction. That is, in Mary, we find an answer.

The Church’s spiritual motherhood is only achieved—the Church knows this too—through the pangs and “the labor” of childbirth (cf. Rev 12:2), that is to say, in constant tension with the forces of evil which still roam the world and affect human hearts, offering resistance to Christ. —POPE JOHN PAUL II, Evangelium Vitae, n.103

Again, I believe it is very possible that this generation or the next could be the one destined to give birth through the hard labor of persecution—the resistance of Antichrist—to the “whole Christ,” Jew and Gentile, preparing a Bride to meet Jesus when He returns at the end of time in power and glory. But where does this new birth take place? Again, we turn to Mary to unlock further the mystery of the Church’s own mission:

At the foot of the Cross, on the strength of Jesus’ own word, you became the mother of believers. —POPE BENEDICT XVI, Spe Salvi, n.50

It is in the Church’s own Passion that she will give birth to the full Body of Christ.

Was not our Mother’s heart pierced with a sword as she participated in the Passion of her Son? So too, the Church will be lanced with a sword, as she will be stripped of the comforts she has always had: the regularity of the Sacraments, her places of worship, and her freedom to speak the truth without prosecution. In a way, Golgotha presents us with two visions of the Church in her coming trial. One is the destiny of those called to martyrdom, pictured in the Body of Christ, crucified—the sword of sacrifice. Then, there are those who will be preserved throughout the trial, hidden and protected beneath the mantle of the Blessed Virgin as they endure the deprivation of “sight,” and enter the dark night of faith—the sword of suffering. Both are present at Calvary.  The former is the seed of the Church; the latter conceives and gives birth to the Church.

But how can we possibly face such a trial, such a birthing, we who are mere flesh and blood? Is this not the same question asked 2000 years ago by a young virgin?

Do not doubt: what was given to Mary has been and will be given to the Church:

The Holy Spirit will come upon you, and the power of the Most High will overshadow you. Therefore the child to be born will be called holy, the Son of God. (v. 35)

As I have written earlier, I believe there will be a “mini-Pentecost” given to the faithful through the Illumination or Warning. The Holy Spirit will overshadow the Church, and what seems now like insurmountable odds will be eclipsed by the graces poured out upon the “womb” of the Woman-Church.

Thus, the angel Gabriel announced to Mary: “Do not be afraid!” Reflecting on these powerful words, Pope Benedict writes:

In your heart, you heard this word again during the night of Golgotha. Before the hour of his betrayal he had said to his disciples: “Be of good cheer, I have overcome the world” (Jn 16:33). —POPE BENEDICT XVI, Spe Salvi, n.50

Is it only coincidence then that, in our times, we have heard these very words again?

Do not be afraid! —POPE JOHN PAUL II

Words from a Pope who said that the Church has arrived at the night of her own Golgotha—”the final confrontation”!

Do not be afraid!

Do you perceive what is being said here, what Pope John Paul and the Holy Spirit seem to be preparing us for?

The final trial of the Church.

And can’t we say that, with the pontificate of Pope John Paul II, there was conceived a new evangelization: young men and women and priests who have been and are being formed in the womb of the Church, who are part of the birthing which is here and coming?

Do not be afraid!

All God asks of you is the same thing He asked of Mary…. the great “yes.”

Faced with the known and unknown crosses she was going to face, the Woman-Mary responded:

Behold, I am the handmaid of the Lord. May it be done to me according to your word. (Luke 1:38)

She gave her simple yes, The Great Yes! This is all our Lord wants from you now, in the face of great changes, the Great Storm which has begun to cover the whole earth, the Great Birthing and the hard labor pains about to come upon the Church like a thief in the night…. the “dark night” of the Body of Christ.

Will you walk by faith and not sight?

Will you trust that I will never leave you?

Do you believe that I will send My Spirit to overshadow and empower you?

Do you trust Me, that when you are persecuted for My sake, you will be blessed by Me?

Will you trust Me when your heart is pierced with a sword?

Will you trust Me in the shadow of the Cross?

Will you trust Me in the silence and darkness of the tomb?

Then, My child, listen carefully to my words…. DO NOT BE AFRAID!

Trust in the LORD with all your heart, on your own intelligence rely not; in all your ways be mindful of him, and he will make straight your paths. (Prov 3:5-6)

The “yes” spoken on the day of the Annunciation reaches full maturity on the day of the Cross, when the time comes for Mary to receive and beget as her children all those who become disciples, pouring out upon them the saving love of her Son… we look to her who is for us “a sign of sure hope and solace.” —POPE JOHN PAUL II, Evangelium Vitae, n.103, 105