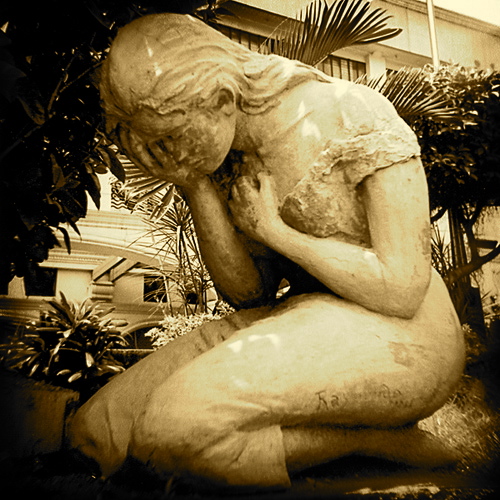 SOME of my friends have either been been involved in the gay lifestyle, or are in it now. I love them no less (though I cannot morally agree with some of their choices.)  For each of them is also made in the image of God.

But this image can be wounded. In fact, it is wounded in all of us in varying degrees and effects. Without exception, the stories I have heard over the years from my friends and from others who have been caught up in the gay lifetsyle bear a common thread:  a deep parental wound. Most often, something significant in the relationship with their father has gone wrong. He has either abandoned them, was absent, abusive, or simply was a non-presence in the home. Sometimes, this is coupled with a dominating mother, or a mother with serious problems of her own such as alcohol, drugs, or other factors.

I have speculated for years that the parental wound is one of the major factors in determining an inclination toward homosexuality. A recent study now overwhelmingly supports this.

The study used a population-based sample of over two million Danes between the ages of 18 and 49. Denmark was the first country to legalize “gay marriage”, and is noted for its tolerance of various alternative lifestyles. As such, homosexuality in that country carries little stigma. Here are some of the findings:

• Men who marry homosexually are more likely to have been raised in a family with unstable parental relationships—particularly, absent or unknown fathers or divorced parents.

• The rates of same-sex marriage were elevated among women who experienced maternal death during adolescence, women with short duration of parental marriage, and women with long duration of mother-absent cohabitation with father.

• Men and women with “unknown fathers” were significantly less likely to marry a person of the opposite sex than were their peers with known fathers.

• Men who experienced parental death during childhood or adolescence had significantly lower heterosexual marriage rates than peers whose parents were both alive on their 18th birthday.

• The shorter the duration of parental marriage, the higher was the likelihood of homosexual marriage.

• Men whose parents divorced before their 6th birthday were 39% more likely to marry homosexually than peers from intact parental marriages.

The authors of the study concluded, “Whatever ingredients determine a person’s sexual preferences and marital choices, our population-based study shows that parental interactions are important.“

This explains in part why many men and women with same-sex attractions who have sought healing have been able to leave the “gay lifestyle” and live normal heterosexual lifestyles. The healing of the parental wound has allowed the person to recover who they are in Christ and who He has created them to be. Still, for some, the process of healing is a long and difficult one, and thus the Church urges us to receive homosexual persons with “respect, compassion, and sensitivity”.

And yet, the Church urges the same love for anyone who is struggling with passions which are contrary to God’s moral law. Today there is an epidemic of alcoholism, addiction to pornography, and other troubling psychoses which are destroying the family. The Church is not singling out homosexuals, but is reaching out to all of us, because we are all sinners, all experiencing some degree of slavery. If anything, the Catholic Church has demonstrated its constancy in the truth, unchanging throughout the centuries. For truth cannot be truth if it is true today, but false tomorrow.

That’s what makes it for some, the hard truth.