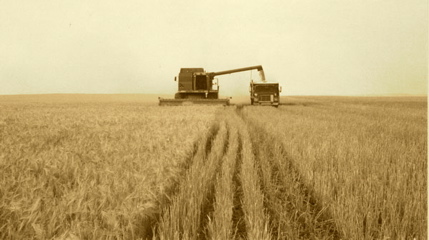 DURING a discussion this week with family, my father-in-law suddenly interjected,

There is a great division occurring. You can see it. People are hardening their hearts to the good…

I was taken aback by his comments, as this was a “word” the Lord had spoken in my heart some time ago (see Persecution:  The Second Petal.)

It is fitting hearing this word again, this time from a farmer’s mouth, as we enter the season when combines begin to separate the wheat from the chaff.

The combine, in this instance, is the Gospel, or more specifically, the morality of the Gospel. As it combs the fields of the earth,  it continues to separate those who claim to be spiritual, and yet reject morality—and those by striving to be moral, reflect spirituality.

You can’t have spirituality without morality, no more than you can drink a cup of water without a glass. The water will simply run all over the place, as will one’s spirituality, unless it is ordered to a moral code. It goes without saying then, that a moral code which is not fixed in absolutes and natural law is not a moral code at all, but a changing fad.

The most recent example of this hardening of heart, this pretense of seeking “good”, was at the International AIDS Conference in Toronto, Canada this week. When a speaker proclaimed that abstinence is not effective against AIDS, there was a cheer in the room—even though, abstinence has proven to be the most successful means of reducing the spread of HIV (read about the Ugandan success story here.)

Indeed, hearts can become so hard that they will even refuse the very thing which will save them. They would choose, rather, to be chaff in the wind.

Do you think that I have come to establish peace on the earth? No, I tell you, but rather division. (Luke 12:51)

But understand this: there will be terrifying times in the last days. People will be self-centered and lovers of money, proud, haughty, abusive, disobedient to their parents, ungrateful, irreligious, callous, implacable, slanderous, licentious, brutal, hating what is good, traitors, reckless, conceited, lovers of pleasure rather than lovers of God, as they make a pretense of religion but deny its power. (2 Tim 3:1-5)