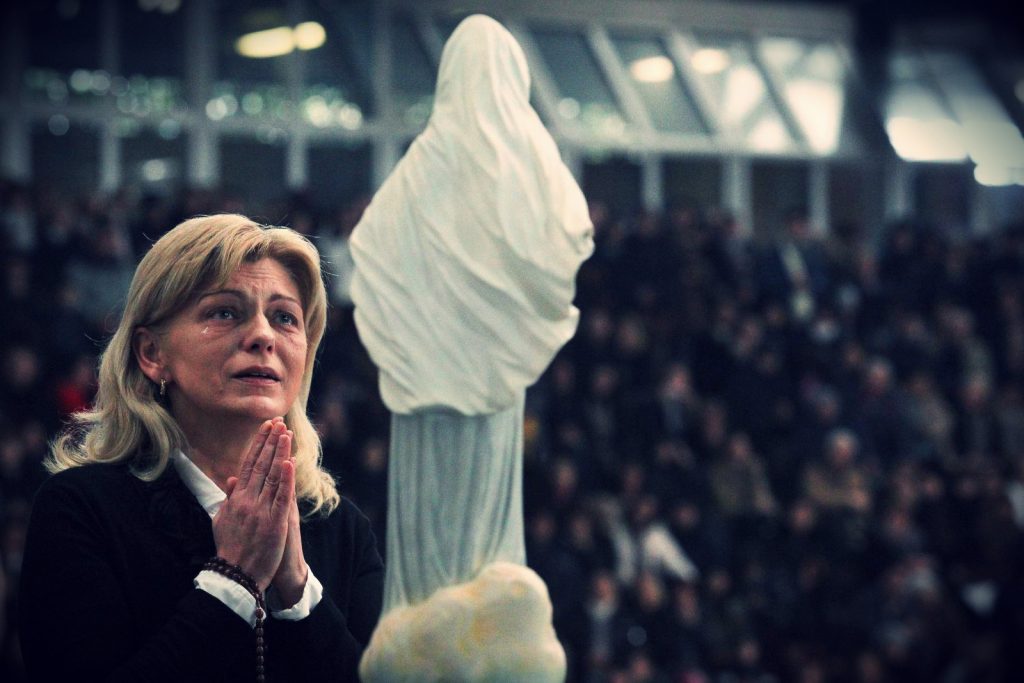 MEDJUGORJE is that little town in Bosnia-Herzogovina where the Blessed Mother has allegedly been appearing for over 25 years. The sheer volume of miracles, conversions, vocations, and other supernatural fruits of this site demand a serious examination of what is occurring there—so much so, that according to new confirmed reports, the Vatican, not the new commission, will direct the final judgment on the alleged phenomena (see Medjugorje: “Just the facts, ma’am”).

This is unprecedented. The significance of the apparitions has reached to the highest levels. And significant they are, given that Mary has allegedly said these will be her “last apparitions on earth.“

When I have appeared for the final time to the last visionary of Medjugorje, I will no longer come in apparition to earth again, because it will no longer be necessary. —Final Harvest, Wayne Weibel, pg. 170

Mirjana clarified that it is the manner in which Our Lady is appearing that will cease:

THE CONTINUATION OF FATIMA

Medjugorje is the fulfillment and continuation of Fatima.

The continuation of what?

After seeing a vision of hell, Mary said to the three visionaries of Fatima:

You have seen hell where the souls of poor sinners go. To save them, God wishes to establish in the world devotion to my Immaculate Heart. If what I say to you is done, many souls will be saved and there will be peace. —The Message of Fatima, www.vatican.va

It is the continuation then of establishing devotion to her Immaculate Heart. Few understand what this really means. Few have explained it as well as Cardinal Luis Martinez:

That is the way Jesus is always conceived. That is the way He is reproduced in souls… Two artisans must concur in the work that is at once God’s masterpiece and humanity’s supreme product: the Holy Spirit and the most holy Virgin Mary… for they are the only ones who can reproduce Christ. –Archbishop Luis M. Martinez, The Sanctifier

Conceived in Baptism, Mary and the Holy Spirit bring Jesus within me to maturity, to full stature through devotion to His Mother—my Mother.

True devotion to the Mother of God is actually Christocentric, indeed, it is very profoundly rooted in the Mystery of the Blessed Trinity. —POPE JOHN PAUL II, Crossing the Threshold of Hope

One could say then, that Fatima, and it’s counterpart, Medjugorje, consist in bringing about the reign of Jesus in the world through the hearts of her children. It is a reign centered upon, sustained by, and flowing from the Holy Eucharist.

Indeed, when I was in Medjugorje, my first thought was, “This isn’t about Mary at all. This place is about Jesus!“ The line-ups to Confession, the packed Masses, the fervent Eucharistic Adoration, the pilgrimages toward the Cross atop the nearby mountain… Medjugorje—indeed, our Blessed Mother, is all about Jesus. Few may realize, in fact, that what is taking place there daily is a sign in itself of what is coming: a time when the world will stream to Christ in the Holy Eucharist during a coming “period of peace.” Hence, it is no coincidence that Mary has come to this war-torn town (war-torn world!) under the title of “Queen of Peace.”

The fulfillment of Fatima will occur according to our Mother’s words:

In the end, my Immaculate Heart will triumph. The Holy Father will consecrate Russia to me, and she shall be converted, and a period of peace will be granted to the world”. —The Message of Fatima, www.vatican.va

At Fatima, an angel of chastisement holding a flaming sword cried out, “Penance, penance, penance,” signaling a time of repentance and mercy for the world. Our response to this time of grace would determine whether this angel would once again revisit the earth. How have we responded?

Today the prospect that the world might be reduced to ashes by a sea of fire no longer seems pure fantasy: man himself, with his inventions, has forged the flaming sword. —Cardinal Ratzinger, The Message of Fatima, Theological Commentary

Thus, I believe this is why we hear at Medjugorje a new threefold petition: “Pray, pray, pray!” The time of mercy is drawing to a close and the days of justice are approaching, as foretold by St. Faustina. Man and his inventions are demolishing the very foundations of life itself. It is now the time to pray, pray, pray for the conversion of sinners… and for oneself, that we will not fall asleep.

As I told you, if men do not repent and better themselves, the Father will inflict a terrible punishment on all humanity. It will be a punishment greater than the deluge, such as one will never have seen before. Fire will fall from the sky and will wipe out a great part of humanity, the good as well as the bad, sparing neither priests nor faithful… Pray very much the prayers of the Rosary. I alone am able to still save you from the calamities which approach. Those who place their confidence in me will be saved. —Approved message of the Blessed Virgin Mary to Sr. Agnes Sasagawa , Akita, Japan; EWTN online library

“Fire will fall from the sky…” This is precisely what over 70 000 souls witnessed at Fatima when the sun began to spin and fall to the earth. Thousands, if not millions, have now witnessed similar phenomena at Medjugorje. It is the continuation and approaching fulfilment of Fatima. While it is a warning of the proximity of a time of judgment, the apparitions are also a sign of God’s great mercy and patience: they have lasted 26 years.

At Mass, words came to me that we are living on “borrowed time.” That when we say the “time is short,” it is to say that at any moment Gods plan could move to the next stage, taking many by surprise like a thief in the night. But because He loves each of us so much, and desires especially to give mercy to even the greatest sinners, He is stretching the time of mercy like an elastic band.

The key to understanding why “it will no longer be necessary” for Mary to appear again on earth lies, I believe, in two things. One, is the particular period of history we are living in relative to the Gospels.

Second then, is the close relationship between Mary and the Church, symbolized by “the Woman” in Revelation 12:1. As Pope Benedict said:

Mary gives birth to the Church who continues to give birth to Christ in this world. This is the drama of Revelation 12… a drama of great labor pains, victories, persecution, Antichrist, the chaining of Satan, and then a period of peace (Rev 20:2). It is a drama that was foretold thousands of years ago when God sentenced the serpent:

This reign of peace will essentially subdue the entire earth with the Gospel (Isaiah 11:4-9). A new evangelization will reach all nations (Matt 24:14), and the Jews and Gentiles will form one body in Christ. The serpent’s head will be crushed beneath the heel of the Woman. She will have fulfilled her role as the new Eve, for she will truly become “the mother of all the living” (Gen 3:20)—Jew and Gentile. The Church will flourish and grow…

…until we all attain to the unity of faith and knowledge of the Son of God, to mature manhood, to the extent of the full stature of Christ. (Eph 4:13)

Mary’s role as Mother will not cease. But it seems that her need to appear to us “in this manner” as a “woman clothed with the sun” will no longer be necessary. For the Church herself will be radiating this Light to the nations until at last it enters into the new heavens and the new earth, taking her place in the New Jerusalem where neither sun nor moon are needed…. for God’s glory is its light, and the Lamb is its lamp.