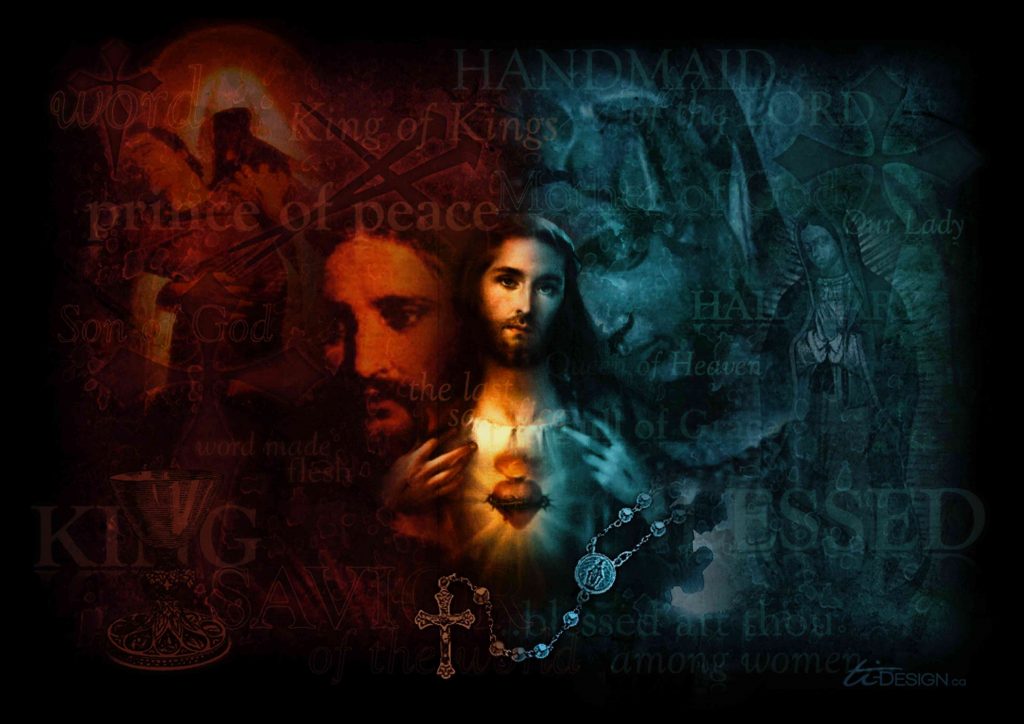 SOLEMNITY OF THE SACRED HEART

IMMEDIATELY after Isaiah’s beautiful vision of an era of peace and justice, which is preceded by a purification of the earth leaving only a remnant, he writes a brief prayer in praise and thanksgiving of God’s mercy—a prophetic prayer, as we will see:

You will say in that day… Behold, God is my salvation; I will trust, and will not be afraid; for the Lord God is my strength and my song, and he has become my salvation. You shall draw waters with joy out of the savior’s fountain… (Isaiah 12:1-2)

The Blessed Virgin’s Magnificat was an echo of this victory song—a song that will be echoed by the Church in that new era. But for now, I want to look at the powerful Christological connection of Isaiah’s words in our dramatic times, and how they are part of God’s “last effort” now toward mankind…

At the very moment in history when Satan began to sow the philosophical lie of deism that sought to turn God into a cold, distant creator, Jesus appeared to St. Margaret Mary Alacoque (1647-1690 A.D.). He revealed to her His flaming Sacred Heart burning with love for His creation. More than that, He was revealing a counter-plan to the dragon’s lies that have been laying the foundation to create a heaven on earth—without God (ie. Marxism, Communism, etc.).

I understood that devotion to the Sacred Heart is a last effort of His Love towards Christians of these latter times, by proposing to them an object and means so calculated to persuade them to love Him. 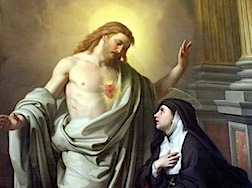 And so, at the height of that philosophical era, God began sending His Mother more frequently into the world to continually call her children back to His Sacred Heart. In the lesser known apparition at Pontmain, France, Mary said to the visionaries:

…My Son lets His heart be touched. —January 17th, 1871, www.sanctuaire-pontmain.com

Jesus wants His Heart to be touched—for the flames of His love and mercy to penetrate and melt the hearts of men grown cold in these last centuries through philosophies which have led him far away from the truth of his own dignity and his Creator.

How? How would His “last effort” to convert mankind be achieved before a great purification of the earth?

In a powerful vision, St. Gertrude the Great (d. 1302) was allowed to rest her head near the wound in the Saviour’s breast. As she listened to His beating Heart, she asked St. John the beloved Apostle how it was that he, whose head had reposed on the breast of the Savior at the Last Supper, kept complete silence in his writings about the throbbing of the adorable Heart of his Master. She expressed regret to him that he had said nothing about it for our instruction. But the saint replied:

My mission was to write for the Church, still in its infancy, something about the uncreated Word of God the Father, something which of itself alone would give exercise to every human intellect to the end of time, something that no one would ever succeed in fully understanding. As for the language of these blessed beats of the Heart of Jesus, it is reserved for the last ages when the world, grown old and become cold in the love of God, will need to be warmed again by the revelation of these mysteries. —Legatus divinae pietatis, IV, 305; “Revelationes Gertrudianae”, ed. Poitiers and Paris, 1877

THE LANGUAGE OF THESE BLESSED BEATS 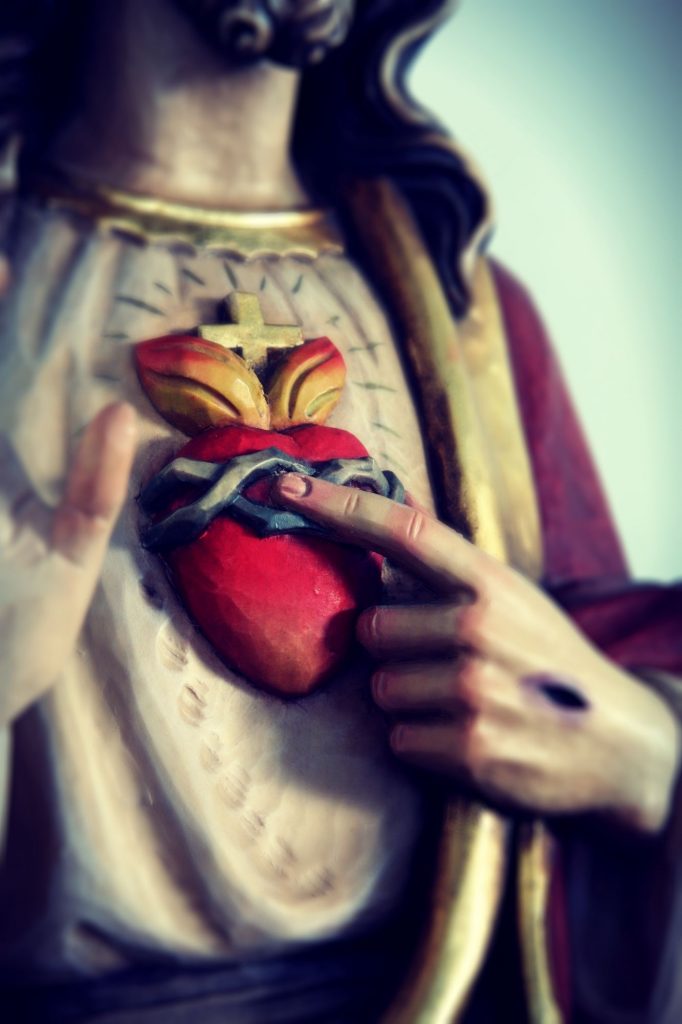 The image of Jesus pointing to His Sacred Heart is one that has spread throughout the world. Statues, icons, and paintings of this consoling image adorn the walls of many cathedrals and churches, not to mention many of our homes. Thus, as the morning star heralds the dawn, this image was the herald of a coming language—a message timed by God towards these latter days to move the hearts of men. That language is the revelation of Divine Mercy through St. Faustina, calculated to become known in our times. The Sacred Heart, one could say, has passed through the prism of St. Faustina, and exploded into a language of light and love. The last effort of God is the message of Mercy, and more specifically, the Feast of Divine Mercy:

Souls perish in spite of My bitter Passion. I am giving them the last hope of salvation; that is, the Feast of My Mercy. If they will not adore My mercy, they will perish for all eternity. Secretary of My mercy, write, tell souls about this great mercy of Mine, because the awful day, the day of My justice, is near. —Jesus to St. Faustina, Divine Mercy in My Soul, n. 965

Isaiah prophesied that, before the “day” of justice, there would be offered to mankind “the saviour’s fountain.” That is, the Heart of Jesus. 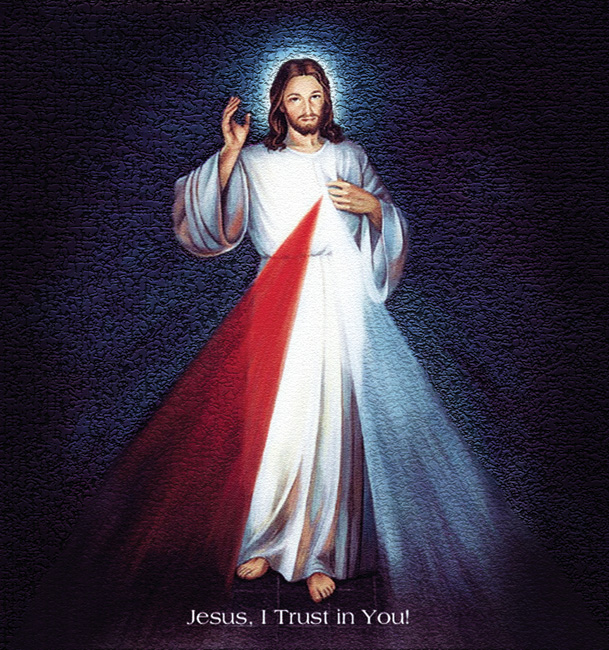 For you I descended from heaven to earth; for you I allowed myself to be nailed to the cross; for you I let my Sacred Heart be pierced with a lance, thus opening wide the source of mercy for you. Come, then, with trust to draw graces from this fountain… From all My wounds, like from streams, mercy flows for souls, but the wound in My Heart is the fountain of unfathomable mercy. From this fountain spring all graces for souls. The flames of compassion burn Me. I desire greatly to pour them out upon souls. Speak to the whole world about My mercy. —Jesus to St. Faustina, Divine Mercy in My Soul, n.1485, 1190

And so, my brothers and sisters, you who have been waiting together in The Bastion of our Mother’s Immaculate Heart—do you hear the essence of your mission now?

Speak to the whole world about My mercy.

We are living in an hour of mercy. The chief shepherd of the Church has affirmed this truth in his ordinary magisterium.

Sr. Faustina Kowalska, contemplating the shining wounds of the Risen Christ, received a message of trust for humanity which John Paul II echoed and interpreted and which really is a central message precisely for our time: Mercy as God’s power, as a divine barrier against the evil of the world. —POPE BENEDICT XVI, General Audience, May 31st, 2006, www.vatican.va

In the final analysis, healing can only come from deep faith in God’s reconciling love. Strengthening this faith, nourishing it and causing it to shine forth is the Church’s principal task at this hour… —POPE BENEDICT XVI, Address to the Roman Curia, December 20th, 2010 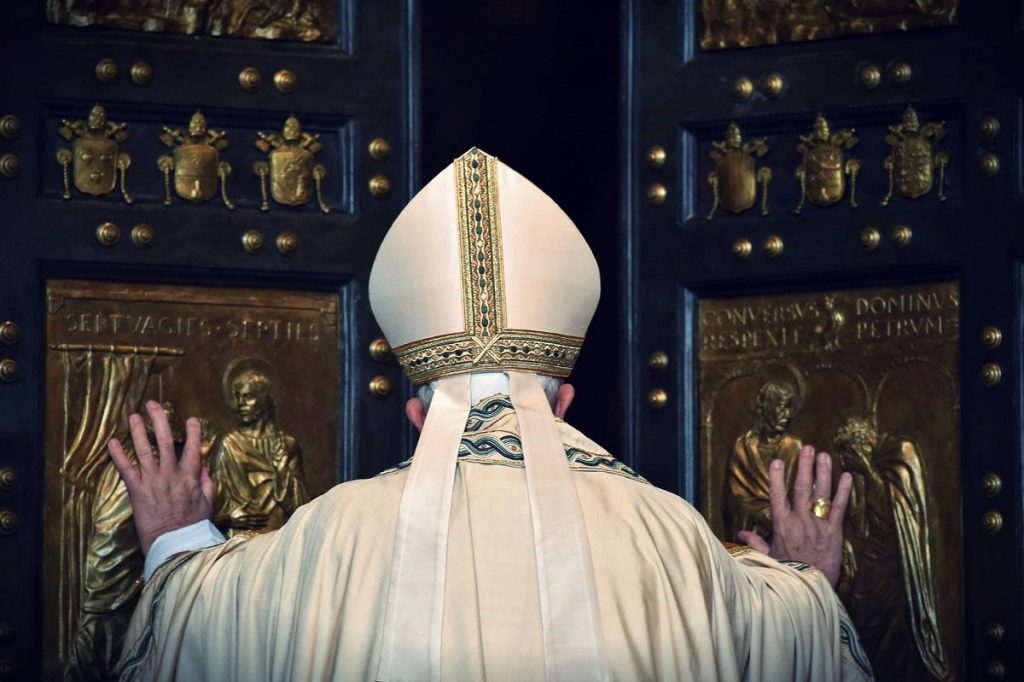 And then again in 2014, as if punctuating the urgency of this hour, his successor announced a “Year of Mercy”:

…hear the voice of the Spirit speaking to the whole Church of our time, which is the time of mercy. I am sure of this. It is not only Lent; we are living in a time of mercy, and have been for 30 years or more, up to today. —POPE FRANCIS, Vatican City, March 6th, 2014, www.vatican.va

In fact, there is a striking indication from St. Faustina of when the time of mercy may, in fact, begin to expire: when the message of Divine Mercy is undermined…

There will come a time when this work, which God is demanding so very much, will be as though utterly undone. And then God will act with great power, which will give evidence of its authenticity. It will be a new splendor for the Church, although it has been dormant in it from long ago. That God is infinitely merciful, no one can deny. He desires everyone to know this before He comes again as Judge. He wants souls to come to know Him first as King of Mercy. —St. Faustina, Diary; Ibid. n. 378

Did this refer to when the diary of Faustina was in disfavor with Rome? I was traveling one day with Fr. Seraphim Michelenko, who helped to translate and edit Faustina’s writings. He shared with me how it was poor translations that nearly shelved the diary, and thanks to his intervention, the message of Divine Mercy was able to continue its dissemination.

But now I wonder if St. Faustina was not referring to this present moment when certain shepherds have begun to promote a kind of Anti-Mercy whereby sinners are “welcomed,” but not called to repentance? This, to me, is truly undoing the Authentic Mercy that is found in the Gospels, and further unfolded in Faustina’s diary.

YOU ARE PART OF IT

We are not mere bystanders; we are an intrinsic part of God’s “last effort.” Whether we live to see the Era of Peace is not our concern. Right now, nature is reeling under the sins of men. Scientists tell us that the magnetic poles of the earth are now shifting at an unprecedented rate and that, along with the shifting of the sun’s poles at the same time, this is actually creating a cooling effect upon the earth.[1]cf. Climate Change and the Great Delusion Is it possible that as the moral poles have begun to flip—that which is evil is now considered good, and good is often deemed evil or “intolerant”—that nature is simply reflecting man’s heart back to him?

…because of the increase of evildoing, the love of many will grow cold… all creation is groaning in labor pains even until now…. (Matthew 24:12, Romans 8:22)

The earth is trembling, literally—a sign that the “fault-line” in the souls of men is reaching critical mass. Just as volcanoes are waking up 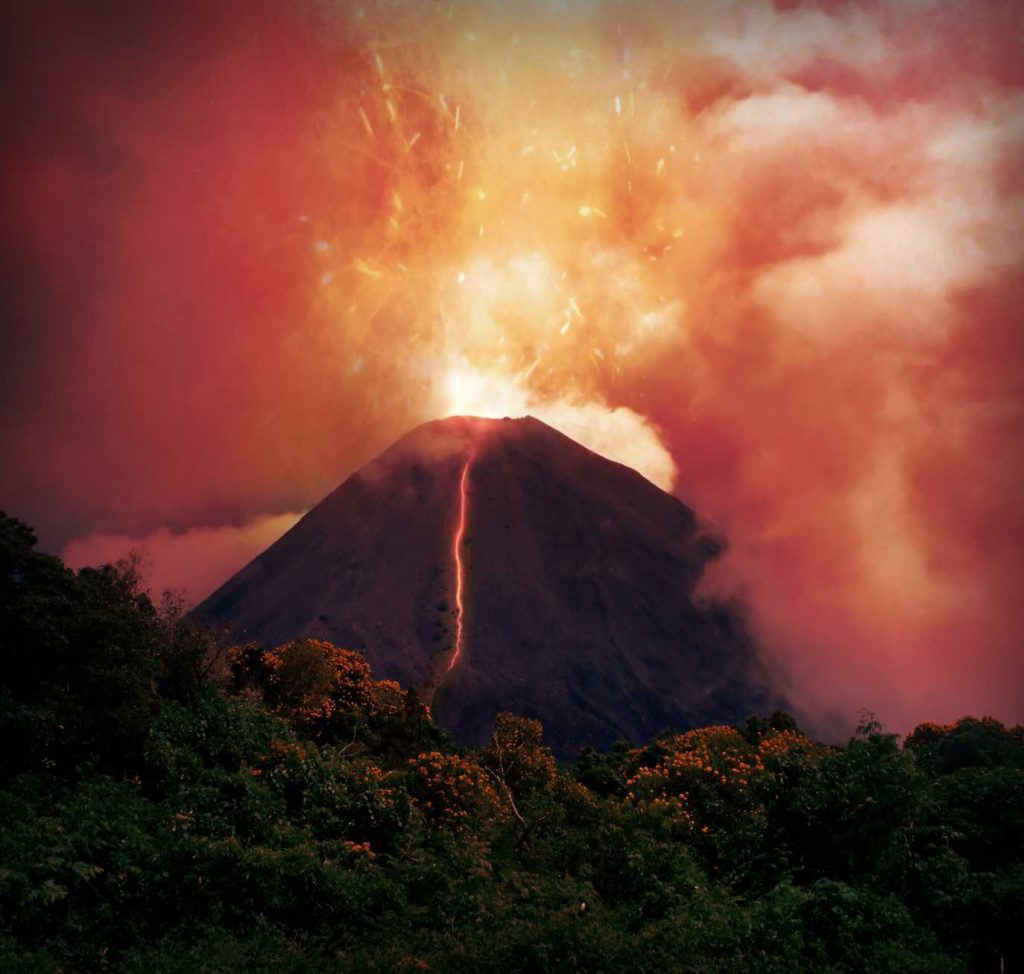 all over the earth covering entire towns in ash, so too, the sins of men are covering humanity with an ash of despair. Just as the earth is splitting open and lava is spilling out, soon, the hearts of mankind will be rent open…

When the Church, in the days immediately succeeding her institution, was oppressed beneath the yoke of the Caesars, a young Emperor saw in the heavens a cross, which became at once the happy omen and cause of the glorious victory that soon followed. And now, today, behold another blessed and heavenly token is offered to our sight—the most Sacred Heart of Jesus, with a cross rising from it and shining forth with dazzling splendor amidst flames of love. Herein must all hopes be set, from hence must the salvation of men be sought and expected. —POPE LEO XIII, Annum Sacrum, Encyclical on Consecration to the Sacred Heart, n. 12

I strongly recommend to all my readers, old and new, to read the following two items regarding this time of preparation:

To the Bastion! – Part I

To the Bastion! – Part II

The Heart of God

On the role of the Eucharist in times to come: Meeting Face to Face

Is God sending us Signs From the Sky? A look back at some thoughts from 2007.

The coming revelation of the Eucharist: The Sun of Justice

My daughter composed the image above at the same time I was preparing this meditation. She was unaware of what I was writing about. We called the artwork “The Last Effort”.