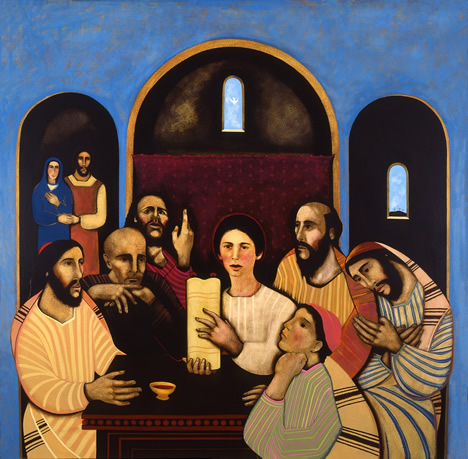 Finding in the Temple, by Michael D. O’Brien

DO you really want to see change in your life? Do you really want to experience the power of God that transforms and liberates one from the powers of sin? It doesn’t happen on its own. No more than a branch can grow unless it draws from the vine, or a newborn baby can live unless it suckles. New life in Christ through Baptism is not the end; it is the beginning. But how many souls think that that is enough!

In Baptism, we are made into a new creation. We are cleansed of sin and made whole. But it is as though we are born in the baptismal font. We are merely babes who must yet grow and mature…

…until we all attain to the unity of faith and knowledge of the Son of God, to mature manhood, to the extent of the full stature of Christ, so that we may no longer be infants, tossed by waves and swept along by every wind of teaching arising from human trickery, from their cunning in the interests of deceitful scheming. (Eph 4:13-14)

The terrible disease in the Church, particularly in the Western world, has been a complacency of faith, a maintenance of the status quo and almost a repulsion for anything that would challenge that. So long as you come to Mass on Sunday, you can pat yourself on the back and congratulate yourself for "doing more than most." If going to Mass were a ticket to Heaven, then by all means, why bother doing more?

But it’s not a ticket. In fact, for some, it will be an indictment—that after having been given so much, we have done so little. But, in truth, the sheep have also been offered little. The pulpits in many places have fallen silent on explaining the Catholic Faith; devotions, such as the Rosary, have been relegated to antiquity along with reverent liturgy and sacred art; and the Sacraments in some places have become something we do, rather than encounter. As a result, there has been a general loss of hunger for God, of passion for Truth, and zeal for souls; many Christians in the modern world have remained infants, and what’s most tragic, "infants, tossed by waves and swept along by every wind of teaching arising from human trickery…"

Becoming a Christian is not about becoming a member of some club, but completely changing the course of one’s life. It means a complete renovation of one’s lifestyle according to a new pattern, a new mode of being. Yes, it’s radical. It’s bloody radical! Because it was made possible by the shedding of Christ’s blood. Jesus died on the Cross to free you from the power of death so that you can truly live, be fully alive. A Man DIED for you. How can this be a little thing, a "nice" thing, a private thing? It is the thing. It should become the center of your life, the pivot of your thoughts, the force behind all your actions. If it’s not, then who are you? Are you really the man or woman God created you to be, or still an infant who has been swept away by the world?

PUT ON THE MIND OF CHRIST

I have written you already about having the Heart of God and becoming the Face of Love to others. But you are not just spirit and body; you also have a soul. It is that place where the will and intellect reside. To love the Lord your God with all your heart, with all your soul, and with all your strength (Deut 6:5) is to align your complete being with him. That means you should also put on the mind of Christ.

Jesus demonstrates what this means. When He was just a boy, Jesus suddenly left His parents:

After three days they found him in the temple, sitting among the teachers, listening to them and asking them questions… (Luke 2:46)

If Jesus, the God-Man, found it necessary to seek out teachers and to find answers, how much more do we, whose minds are darkened by fallen human nature, need the light of knowledge to show us the path to take?

You have been told, O man, what is good, and what the LORD requires of you: only to do the right and to love goodness, and to walk humbly with your God. (Micah 6:8)

What is right? What is good? We live in a world that showers us with condoms, birth control pills, reproductive technologies, alternative forms of marriage, abortion, and a growing list of ethical complexities. What is right? What is good? The Christian must put on the mind of Christ, because moral actions either produce life—or death. We need to turn off the television and begin to grow "in the knowledge of the Son of God" so that we may live.

So I declare and testify in the Lord that you must no longer live as the Gentiles do, in the futility of their minds; darkened in understanding, alienated from the life of God because of their ignorance, because of their hardness of heart, they have become callous and have handed themselves over to licentiousness for the practice of every kind of impurity to excess. That is not how you learned Christ, assuming that you have heard of him and were taught in him, as truth is in Jesus, that you should put away the old self of your former way of life, corrupted through deceitful desires, and be renewed in the spirit of your minds, and put on the new self, created in God’s way in righteousness and holiness of truth. (Eph 4:17-24)

TRANSFORMATION THROUGH THE MIND

St. Paul’s vision of spiritual transformation is incarnational. He does not sit passively waiting for God to change him. Rather, he exhorts us to actively renew our minds.

Do not conform yourselves to this age but be transformed by the renewal of your mind, that you may discern what is the will of God, what is good and pleasing and perfect. (Rom 12:2)

So many Christians today are formed by Oprah Winfrey or the latest self-help guru rather than by their Mother, the Church. They listen to false teachers who tickle their ears with Da Vinci codes, speculation, and subtle deceptions rather than the truth that would set them free. They are sometimes like infants who prefer candy rather than healthy food.

Let no one deceive you with empty words… Although you should be teachers by this time, you need to have someone teach you again the basic elements of the utterances of God. You need milk, and not solid food. Everyone who lives on milk lacks experience of the word of righteo
usness, for he is a child. But solid food is for the mature, for those whose faculties are trained by practice to discern good and evil. (Eph 5:6; Heb 5:12-14)

We have to learn "by practice" to distinguish between good and evil. We do this, says St. Paul, by taking "every thought captive to obey Christ" (2 Cor 10:5). This filtering, however, is not a subjective process. Truth is not something we decide because "I prayed and thought about it." Truth is rooted in the natural law and in the moral revelation of Jesus, as given to His Church, and revealed through the Holy Spirit. Even the Spirit speaks only what has been given:

…when he comes, the Spirit of truth, he will guide you to all truth. He will not speak on his own, but he will speak what he hears… (John 16:13).

The proclamation of Christ, the proclamation of the Kingdom of God presupposes listening to his voice in the voice of the Church. "Not speak on his own authority" means: to speak in the mission of the Church…—Cardinal Ratzinger (POPE BENEDICT XVI), The New Evangelization, Building the Civilization of Love; Address to Catechists and Religion Teachers, December 12, 2000

GOD HAS YOU IN MIND

Having the mind of Christ is to have the mind of the Church. The mind of the Church is the mind of Christ. He is not divided from His Body as you cannot be divided in your thinking from the Head. But there is something deeper and more personal here. God wants to speak to you, in your heart (see God Speaks… to me?). To put on the mind of Christ is to above all come to know the mind of God—to know His Heart. This is remarkable, of course, because God wants to reveal His inmost being to you. He wants you to dwell in the regions of His Heart "that eye has not seen, and ear has not heard, and what has not entered the human heart, what God has prepared for those who love him" (1 Cor 2:9). He wishes to give you Wisdom, a wisdom that the world does not know. He wants every single one of His people to be a mystic. For a mystic is simply one who raises His eyes from the temporal into the eternal, who takes the time to look into the eyes of Love. This is possible, to one degree or another, for every single Christian. It is, in fact, our vocation:

…that Christ may dwell in your hearts through faith; that you, rooted and grounded in love, may have strength to comprehend with all the holy ones what is the breadth and length and height and depth, and to know the love of Christ that surpasses knowledge, so that you may be filled with all the fullness of God. (Eph 3:17-19)

This knowledge will only come to you as, day by day, you seek first the Kingdom of God, spending regular time in prayer, opening your heart to the One who will speak to you. He will speak to you, above all, in His Word, the Sacred Scripture, which when received like a little child, has the power to change and transform you. But like a branch that must draw sap from the vine, or a baby, milk from its mother, you must actively dispose yourself to the contemplation of God through humility, prayer, and obedience.

Contemplation is a gaze of faith, fixed on Jesus. "I look at him and he looks at me"… Contemplation also turns its gaze on the mysteries of the life of Christ. Thus it learns the "interior knowledge of our Lord," the more to love him and follow him. —Catechism of the Catholic Church, n. 2715

The Word of God—listening to and meditating on the Word of God is a daily encounter with "the surpassing knowledge of Jesus Christ". The Council "forcefully and specifically exhorts all the Christian faithful, especially those who live the religious life, to learn this sublime knowledge" (Dei Verbum 25). —Eduardo Cardinal Pironio, Prefect, The Contemplative Dimension of Religious Life, 4-7 March 1980; www.vatican.va