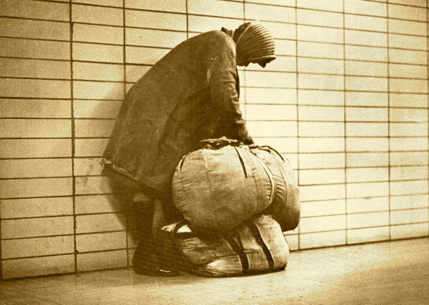 THE first Mass reading this past Sunday (October 5th, 2008) resounded in my heart like thunder. I heard the sigh of a God mourning over the state of His Betrothed:

What more was there to do for my vineyard that I had not done? Why, when I looked for the crop of grapes, did it bring forth wild grapes? Now, I will let you know what I mean to do with my vineyard: take away its hedge, give it to grazing, break through its wall, let it be trampled! (Isaiah 5:4-5)

But this too is an act of love. Read on to understand why the purification which has now arrived is not only necessary, but part of God’s divine plan…

WHEN I traveled to the Vatican last fall, my first goal was to go to St. Peter’s Basilica. My hotel was only a few blocks away, so I quickly checked in and walked over to St. Peter’s Square.

The scene was gorgeous. Rome was quiet, the air warm, and the lighting on St. Peter’s striking. I stayed awhile and prayed at the “Holy City,” exhausted after a 12 hour flight. I headed to bed. With the rising sun, I would walk in the footsteps of popes….

The next morning, I headed straight to the Basilica. Greeted by a long line of tourists shuffling their way through security, I at last approached those vast Vatican steps which saints and popes alike had ascended. Passing through the great bronze doors, I gazed upward at the interior of this enormous cathedral… and my spirit skipped a beat as I heard the words:

If only my people were as adorned as this church.

All at once I felt the Lord’s sorrow hanging over the Catholic Church… its scandals, its divisions, the apathy, the silence, the sheep in their local dioceses longing for leadership… and I felt embarrassed. The statues, the gold, the marble, the diamond studded chalices, the hundreds upon hundreds of icons and paintings… yes, they are an outward sign of the splendor and glory of God, images which reflect the mysteries of creation, the incarnation, and eternity.  But without the interior splendor of the Church radiating the life and love of Jesus, these ornaments become…. like a baglady with heavy makeup. It simply doesn’t cover the truth.

The bells and smells and statues and beautiful liturgies are all a part of the expression of our faith in Christ, the Son of the living God. But they are empty without allowing ourselves to be transformed by His name, His power, His truths, His way.  Is the Church losing its voice? Is it becoming so correct and confused so as not to offend, that we have lost not only our passion and purpose, but our power to overcome, to stand up for the very basic truths that Jesus was sent to teach us? We are trying, but often we are failing. If Satan can play with each of our minds and lure us into things unimaginable, it should not be surprising that he can and is blinding and attempting to destroy the Church as well.

But he will not entirely succeed. Christ is permitting this purification so as to bring about a greater glory… a glory from within.

As much as she tries, the makeup, the ragged clothes, and the shopping cart full of her prized “collections” only expose the truth that she is still a vagrant, still impoverished, perhaps poorer than ever.

There is coming a time when this impoverished baglady will be stripped: her voice on the world stage removed, the glory of her churches desecrated, and the “makeup” covering her wounds and corruption wiped away.

I will strip her naked, leaving her as on the day of her birth… (Hosea 2:5)

[Man] shall be actually disciplined beforehand for incorruption, and shall go forwards and flourish in the times of the kingdom, in order that he may be capable of receiving the glory of the Father. —St. Irenaeus of Lyons, Church Father (140–202 A.D.); Adversus Haereses, Irenaeus of Lyons, passim Bk. 5, Ch. 35, The Fathers of the Church, CIMA Publishing Co.; (St. Irenaeus was a student of St. Polycarp, who knew and learned from the Apostle John and was later consecrated bishop of Smyrna by John.)

Was not Christ stripped beneath the Cross? As it was for the Head, so it will be for the Body. If the Bridegroom himself, the king of kings, permitted himself to become one with the lowest of the low, despised and rejected, as a necessary prologue to his resurrection and the full revelation of his glory, is it not reasonable that the Bride’s current degradation will one day be transformed into radiant purity and glory? Her present sufferings and humiliations must be understood as a necessary preparation for something far, far greater which is to come—the full restoration and revelation of the Bride-Queen. For beneath the rags and the dirt and the shame, that is who she is.

But God is a loving Father who disciplines His children because He loves them. Both Mercy and Justice flow from the same wellspring of Love. God strips in order to clothe. He exposes in order to heal. He takes away in order to give back… but always returning what was sullied—purified; what was broken—repaired; what was inordinate—now sanctified.

And He will do it for his Bride in the Era of Peace. The Flame of Light and Truth which is becoming hidden now (see The Smoldering Candle), will burst into the open, becoming an inexhaustible light to the nations.

The Church will become resplendent—like a woman clothed with the sun.

For you say, ‘I am rich and affluent and have no need of anything,’ and yet do not realize that you are wretched, pitiable, poor, blind, and naked. I advise you to buy from me gold refined by fire so that you may be rich, and white garments to put on so that your shameful nakedness may not be exposed, and buy ointment to smear on your eyes so that you may see.

Those whom I love, I reprove and chastise. Be earnest, therefore, and repent… I will give the victor the right to sit with me on my throne, as I myself first won the victory and sit with my Father on his throne. Let anyone who has an ear listen to what the Spirit is saying to the churches. (Revelations 3:18-22)

Sacred Scripture and approved prophetic revelations predict within the Church an imminent crisis. It will be precipitated by a split within the hierarchy of the Catholic Chur ch and accompany the Roman Pontiff’s flight from Rome.  —Fr. Joseph Iannuzzi, Antichrist and the End Times, P. 27; former associate exorcist to Fr. Gabriel Amorth, Chief Exorcist of Rome