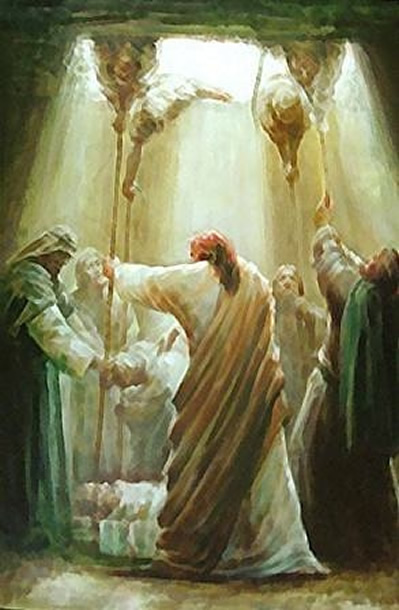 THERE are times when trials are so intense, temptations so fierce, emotions so embroiled, that recollection is very difficult. I want to pray, but my mind is spinning; I want to rest, but my body is reeling; I want to believe, but my soul is wrestling with a thousand doubts. Sometimes, these are moments of spiritual warfare—an attack by the enemy to discourage and drive the soul into sin and despair… but permitted nonetheless by God to allow the soul to see its weakness and constant need for Him, and thus draw nearer to the Source of its strength.

The late Fr. George Kosicki, one of the “grandfathers” of making known the message of Divine Mercy that was revealed to St. Faustina, sent me a draft of his powerful book, Faustina’s Weapon, before he passed away. Fr. George identifies the experiences of spiritual attack that St. Faustina went through:

He even identifies some of his own ‘attacks’ as including ‘a “concert” of headaches… fatigue, drifting mind, a “zombie” head, attacks of sleepiness during prayer, irregular sleep pattern, in addition to doubts, oppression, anxiety, and worry.’

At times like these, we may not identify with the saints. We cannot picture ourselves as the close companions of Jesus like John or Peter; we feel even more unworthy than the adulterous or hemorrhaging woman who touched him; we do not even feel capable of speaking to him like the lepers or the blind man of Bethsaida. There are times when we feel simply paralyzed.

In the parable of the paralytic, who was lowered to the feet of Jesus through the ceiling, the ill man says nothing. We assume he wants to be healed, but of course, had no power to even bring himself to Christ’s feet. It was his friends who brought him before the face of Mercy.

Another “paralytic” was the the daughter of Jairus. She was dying. Even though Jesus said, “Let the little children come to me,” she could not. As Jarius was speaking, she died… and so Jesus went to her and raised her from the dead.

Lazarus had also died. After Christ raised him, Lazarus emerged from his tomb alive and bound in burial wrappings. Jesus ordered the friends and family gathered to remove the burial cloths.

The centurion’s servant was also a “paralytic” who was near death, too sick to come to Jesus himself. But neither did the centurion deem himself worthy to have Jesus enter his house, begging the Lord to only say a word of healing. Jesus did, and the servant was healed.

And then there is the “good thief” who was also a “paralytic,” his hands and feet nailed to the Cross.

THE “FRIENDS” OF THE PARALYTIC

In each of these examples, there is a “friend” who brings the paralyzed soul into the presence of Jesus. In the first case, the helpers who lowered the paralytic through the ceiling are a symbol of the priesthood. Through Sacramental Confession, I come to the priest “as I am,” and he, representing Jesus, places me before the Father who then pronounces, as Christ did to the paralytic:

Jairus represents all those people who pray and intercede for us, including those we’ve never met. Every day, in Masses said throughout the world, the faithful pray, “…And I ask the Blessed Virgin Mary, all the angels and saints, and you my brothers and sisters to pray for me to the Lord our God.”

It is their prayers that bring about those sudden moments of grace when Jesus comes to us when we cannot seem to come Him. To those who are praying and interceding, especially for loved ones who have fallen away from the faith, Jesus says to them as He did to Jairus:

As for those of us who are paralyzed, so weakened and distraught like Jairus’s daughter, we need only be attentive to the words of Jesus that will come, in one form or another, and not reject them out of pride or self-pity:

That is, Jesus says to the paralyzed soul:

Why all this commotion and weeping as if you are lost? Am I not the Good Shepherd who has come precisely for the lost sheep? And here I AM! You are not dead if LIFE has found you; you are not lost if the WAY has come to you; you are not dumb if the TRUTH speaks to you. Arise, soul, pick up your mat and walk!

Once, in a time of despair, I lamented to the Lord: “I am like a dead tree, that although planted by a flowing River, am unable to draw water into my soul. I remain dead, unchanged, bearing no fruit. How can I not believe that I am damned?” The response was startling—and woke me up:

You are damned if you fail to trust in My goodness. It it not for you to determine times or seasons when the tree shall bear fruit. Do not judge yourself but continually remain in My mercy. 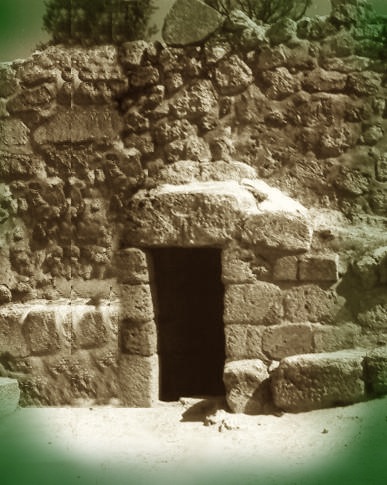 Then there is Lazarus. Though raised from the dead, he was still bound by the cloths of death. He represents the Christian soul who is saved—raised to new life—but is still weighed down by sin and attachment, by “…worldly anxiety and the lure of riches [that] choke the word and it bears no fruit” (Matt 13:22). Such a soul is walking in darkness, which is why, on His way to Lazarus’s tomb, Jesus said,

If one walks during the day, he does not stumble, because he sees the light of this world. But if one walks at night, he stumbles, because the light is not in him.  (John 11:9-10)

Such a paralytic is dependent upon means outside himself to free him from the deadly grip of sin. The Holy Scriptures, a spiritual director, the teachings of the Saints, the words of a wise Confessor, or words of knowledge from a brother or sister… These are those words of truth that bring life and the ability to set upon a new way. Words that would set him free if he is wise and humble enough
to obey their counsels.

I am the resurrection and the life; whoever believes in me, even if he dies, will live, and everyone who lives and believes in me will never die. (John 11:25-26)

Seeing such a soul trapped in its poisonous desires, Jesus is moved not to condemnation but compassion. At Lazarus’s tomb, the Scriptures say:

The servant of the centurion was another kind of paralytic, unable to meet the Lord on the road due to his illness. And so the centurion came on his behalf to Jesus, saying,

Lord, do not trouble yourself, for I am not worthy to have you enter under my roof. Therefore, I did not consider myself worthy to come to you; but say the word and let my servant be healed.  (Luke 7:6-7)

This is the same prayer we say before receiving Holy Communion. When we pray this prayer from the heart, with the same humility and trust as the centurion, Jesus will come Himself—body, blood, soul and spirit—to the paralyzed soul, saying:

Such words may seem out of place to the paralyzed soul who, so stricken in his spiritual condition, feels like Mother Teresa once did:

The place of God in my soul is blank. There is no God in me. When the pain of longing is so great—I just long & long for God… and then it is that I feel He does not want me—He is not there—God does not want me.  —Mother Teresa, Come By My Light, Brian Kolodiejchuk, M.C.; pg. 2

But Jesus has come indeed to the soul through the Holy Eucharist. Despite her feelings, the paralyzed soul’s little act of faith, which is perhaps the “size of a mustard seed,” has moved a mountain by simply opening her mouth to receive the Lord. Her friend, her “centurion” in this moment is humility:

My sacrifice, O God, is a contrite spirit; a heart contrite and humbled, O God, you will not spurn. (Psalm 51:19)

She should not doubt that He has come, for she feels Him there upon her tongue in the disguise of Bread and Wine. She need only keep her heart humble and open, and the Lord will indeed “dine” with her beneath the roof of her heart (cf. Rev 3:20).

And finally, there is the “good thief.” Who was the “friend” who brought this poor paralytic to Jesus? Suffering. Whether it is suffering brought on by ourselves or others, suffering can leave us in a state of utter helplessness. The “bad thief” refused to allow suffering to purify him, thus blinding him to recognize Jesus in the midst of it. But the “good thief” acknowledged that he was not innocent and that the nails and wood that bound him were a means by which to do penance, to quietly accept the will of God in the distressing disguise of suffering. It was in this abandonment that He recognized the face of God, right there beside Him.

This is the one whom I approve: the lowly and broken man who trembles at my word… the Lord listens to the needy and does not spurn his servants in their chains. (Is 66:2; Ps 69:34)

It was in this helplessness that he begged Jesus to remember Him when he entered His kingdom. And in words that should give the greatest sinner—lying upon the bed he has made by his own rebellion—the greatest of hope, Jesus replied:

In each of these cases, the paralytic eventually rose and walked again, including the good thief who, after completing his journey through the valley of darkness, walked among the green pastures of paradise.

Home for us is simply the will of God. While we may go through periods of paralysis from time to time, even if we can not recollect ourselves, we can still choose to remain in the will of God. We can still complete the duty of the moment even if a war is erupting in our souls. For His “yoke is easy and burden is light.” And we can rely upon those “friends” that God will send us in our moment of need.

There was a sixth paralytic. It was Jesus himself. In the hour of His agony, He was “paralyzed” in His human nature, so to speak, by sorrow and fear of the path that lay before Him.

“My soul is sorrowful, even unto death…” He was in such agony and he prayed so fervently that his sweat became like drops of blood falling on the ground. (Mt 26:38; Lk 22:44)

During this agony, a “friend” was also sent to Him:

…to strengthen him an angel from heaven appeared to him. (Lk 22:43)

Abba, Father, all things are possible to you. Take this cup away from me, but not what I will but what you will. (Mk 14:36)

With that, Jesus rose and silently walked the path of the Father’s will. The paralytic soul can learn from this. When we are tired, afraid, and at a loss for words in the dryness of prayer, it is enough to simply remain in the Father’s will in the trial. It is enough to silently drink from the chalice of suffering with the childlike faith of Jesus:

If you keep my commandments, you will remain in my love, just as I have kept my Father’s commandments and remain in his love. (John 15:10)

Peace in Presence, Not Absence

A series of writings dealing with fear: Paralyzed by Fear