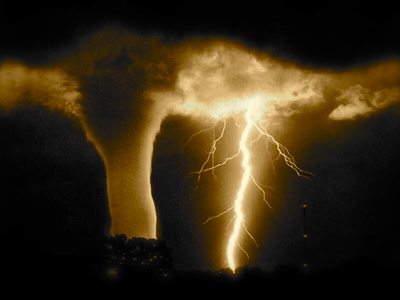 From subsistence farmers eating rice in Ecuador to gourmets feasting on escargot in France, consumers worldwide face rising food prices in what analysts call a perfect storm of conditions. Freak weather is a factor. But so are dramatic changes in the global economy, including higher oil prices, lower food reserves and growing consumer demand in China and India. —NBC News online, March 24th, 2008

In an “unforeseen and unprecedented” shift, the world food supply is dwindling rapidly and food prices are soaring to historic levels… “We’re concerned that we are facing the perfect storm for the world’s hungry.” —Josette Sheeran, Executive Director, World Food Program; Dec 17th, 2007; International Herald Tribune

“It will not take much to put the U.S. economy into recession… [there is a] perfect storm consisting of the worst credit crunch in decades, falling house prices, and $100 oil. —David Shulman, Senior Economist, UCLA Anderson Forecast; March 11th, 2008, www.inman.com

The Washington-based International Monetary Fund has warned of a ‘perfect storm’ caused by surging oil prices and the turbulence on financial markets. ‘The combination of the credit crunch and high oil prices could bring a big reduction in international trade from which no one would be immune.’ —Simon Johnson, Chief Economist IMF, Nov 29th, 2007; www.thisismoney.co.uk

It’s been 16 months… In the intervening time following the identification of the malady now known as Colony Collapse Disorder (CCD), things haven’t gotten any better for the nation’s bees, which pollinate about one-third of U.S. crops—some $15 billion worth... “It is something else. It is a perfect storm, if you want to call it that. Anything that weakens or ages [the bees] will contribute, we believe, to CCD.”  —Kevin Hackett, national program leader for research on bees and pollination, Agricultural Research Service; March 24th, 2008; www.palmbeachpost.com

I am reminded of the words which came to me at the beginning of this year: see The Year of the Unfolding.

For over two years, I have been compelled to write about a present and coming “storm.” Preparation for this storm is at the very heart of these writings.

Didn’t Noah prepare the ark for a storm? If Mary is the “new ark”, then she has been sent to prepare us for the Great Storm. The warning is one of spiritual preparation so that when the storm is unleashed, you will already be safely in the Ark of Mary’s Heart; so that when that which is built on sand begins to crumble, you will be firmly set upon the Rock, who is Christ; so that when “Babylon” begins to collapse, it will not fall on your head! Your trust will be firmly in Christ, and with Mary’s help, it will not be shaken!

Can you not see the lightning all about you? Are the winds of change not blowing? Can you not hear the claps of thunder?

What should you do to physically prepare? God said He would provide for your needs, and that we should “seek first the Kingdom.” The plan hasn’t changed. It’s just more urgent than ever. Many are frantically trying to secure their lifestyle right now as world systems begin to teeter like a drunken sailor. Being a good steward is one thing… building your own god is another.

Neither their silver nor their gold shall be able to save them on the day of the LORD’S wrath… (Zeph 1:18)

What God is asking of you now is quite radical, actually. To be willing to let go of absolutely everything on a moments notice. Can you?

FAITH IS WHAT CONQUERS

The victory that conquers the world is our faith. (1 John 5:4)

What this Scripture means is that when your dreams dissolve, your security shatters, and everything around you seems to collapse, you do not fall with it, because your trust is in God and what He is allowing to happen in your life. That’s how you conquer the pain, and suffering, and cancer, and violence, and injustice, and hatred, and fear. You trust God like a little child in the midst of it, and thereby conquer the power of death—and all its fruits—by accepting the nails of sorrow into your own hands and the crown of discomfort upon your brow and waiting patiently in the darkness of the tomb of God’s silence. Isn’t this precisely what Jesus did whom we are called to imitate? This isn’t some distant, unreachable spirituality—it is the timeless “stuff” of following Christ in all ages, the warp and woof of being His disciple.

Whoever loses his life for my sake and that of the gospel will save it. (Mark 8:35)

Mary has come to prepare us for a great storm, a Great Battle too. What are we doing then with our time and our energy? Where are our hearts storing up treasure? Are we listening to our Mother?

No soldier on service gets entangled in civilian pursuits, since his aim is to satisfy the one who enlisted him.  (2 Tim 2:4)

It is a call to focus—not to become gloomy Christians—but focused on the fact that we have a great mission—a Great Co-mission to be salt and light to others, each and every moment.

I truly believe that our lifestyles in North America are going to change—-yes, I think that is what the Lord is telling us. But if we have already begun to live as pilgrims, detached from the world, and hungering and thirsting for the Kingdom (Matt 5:6), then what we may lose in comfort we will consider to be great gain!

In every circumstance and in all things I have learned the secret of being well fed and of going hungry, of living in abundance and of being in need. I have the strength for everything through him who empowers me. (Phil 4:12-13)

It is strength which comes through faith—childlike trust in all circumstances.

The forces of darkness do indeed seem to have mustered together a “perfect storm.” However, Heaven is countering with it’s own Perfect Storm. And it has all the force of a hurricane, rushing at the speed of a Woman’s heel about to crush a serpent’s head: