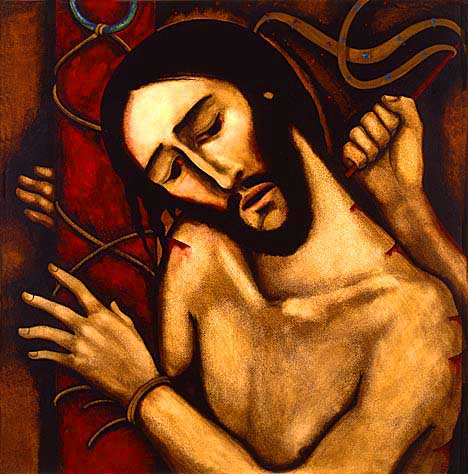 The Flagellation, by Michael D. O’Brien

For seven days you must eat unleavened bread. (Exodus 12:15)

WE continue to follow Christ’s Passion—a pattern for the Church’s own present and coming trials. This writing looks in greater detail at how a Judas—the Antichrist—will rise to power.

In Part IV, the 1260 days of battle between the Dragon and the Woman appear to constitute the first half of the Seven Year Trial. It is based on the fact that the Dragon pursues the Woman but cannot seem to conquer her: she is given refuge for 1260 days in the “desert.” After Christ’s triumphant entry into Jerusalem, He was also protected from those who wanted to harm or arrest Him for approximately three and a half days before the Last Supper. But there came a time when the Father permitted Jesus to be handed over to the authorities. So too, some of the faithful will be handed over to receive the glorious crown of martyrdom during the latter 1260 days—analogous to the period from the Last Supper to the Resurrection.

Then I saw a beast come out of the sea with ten horns and seven heads… to it the dragon gave his power and his throne and great authority… The beast was given a mouth uttering proud boasts and blasphemies, and it was given authority to act for forty-two months… It was also allowed to wage war against the holy ones and conquer them, and it was granted authority over every tribe, people, tongue, and nation. (Rev 13:1-2, 5-7)

At the beginning of the Seven Year Trial, these ten horns and seven heads appear “in the sky” on the Dragon “who is called the Devil and Satan” (12:9). It is a sign that satanism and the occult are reaching a peak, the fruit of the poisonous philosophies the Dragon injected over 400 years ago (see Understanding The Final Confrontation). The “sky” may be a symbolic indication that the power of Satan to that point has been mainly spiritual rather than political; directed from the heavens rather than earth (see Eph 6:12). But now the Dragon, seeing that his time is short (Rev 12:12), takes the form of, or rather, gives his power to, a conglomeration of nations: “seven heads and ten horns.” St. John explains that the ten horns are “ten kings” (Rev 17:2). Venerable Cardinal John Henry Newman, summarizing the thinking of the Church Fathers, identifies this conglomeration:

“The Beast,” that is, the Roman empire. —Advent Sermons on Antichrist, Sermon III, The Religion of Antichrist

Some modern scholars believe that the European Union is, or is forming into the revived Roman Empire. The Dragon, or Satan, is a spiritual entity, a fallen angel, not a union of nations himself. He remains hidden under a cloak of deception, hiding his anger and hatred toward the Church. Thus, in the beginning, the New Order which rises under the Dragon’s influence will at first appear on the surface to be desirable and appealing to a planet reeling from war, plague, famine, and division—five of the Seals of Revelation. It is three and a half years later that the beast is “given a mouth,” personified in a man whom Tradition calls Antichrist.

Hatred of the brethren makes room next for Antichrist; for the devil prepares beforehand the divisions among the people, that he who is to come may be acceptable to them. —St. Cyril of Jerusalem, Church Doctor, (c. 315-386), Catechetical Lectures, Lecture XV, n.9

The Seven Year Trial or “week,” as Daniel says, begins in a false peace that unites the world under the banner of the revived Roman Empire.

And he [Antichrist] shall make a strong covenant with many for one week. (Dan 9:27)

This New World Order will arise in a palatable form that even many Christians will find alluring. Perhaps the Illumination of Conscience in part will be a warning that this proposed global path is anti-God, a path of destruction, a “false peace and security.” Thus, the illumination becomes a  “last call” to draw souls back to the path of true Christian unity.

For half way through the “week,” this revived Roman Empire suddenly breaks up.

I was considering the ten horns it had, when suddenly another, a little horn, sprang out of their midst, and three of the previous horns were torn away to make room for it. (Dan 7:8)

When people are saying, “Peace and security,” then sudden disaster comes upon them, like labor pains upon a pregnant woman,and they will not escape. (1 Thess 5:3)

Cardinal Newman, echoing the Church Fathers, interprets this collapse of the Empire to be the removal of the “restrainer” of 2 Thess 2: 7, making way for the “man of lawlessness”, the “son of perdition”, the Beast, the Antichrist (different names for the same person), to come to power. Again, he is called the “mouth” of the beast, because he, Antichrist, will rule and give voice to all that is of the antichrist spirit in those nations.

Satan may adopt the more alarming weapons of deceit—he may hide himself—he may attempt to seduce us in little things, and so to move the Church, not all at once, but by little and little from her true position. I do believe he has done much in this way in the course of the last few centuries… It is his policy to split us up and divide us, to dislodge us gradually from our rock of strength. And if there is to be a persecution, perhaps it will be then; then, perhaps, when we are all of us in all parts of Christendom so divided, and so reduced, so full of schism, so close upon heresy. When we have cast ourselves upon the world and depend for protection upon it, and have given up our independence and our strength, then he may burst upon us in fury as far as God allows him. Then suddenly the Roman Empire may break up, and Antichrist appear as a persecutor, and the barbarous nations around break in. —Venerable John Henry Newman, Sermon IV: The Persecution of Antichrist

THE FACE OF ANTICHRIST

The Antichrist will appear to be a savior such that the Jews will be deceived into believing that he is the messiah.

Hence, considering that A ntichrist would pretend to be the Messiah, it was of old the received notion that he was to be of Jewish race and to observe the Jewish rites.  —Cardinal John Henry Newman, Advent Sermons on Antichrist, Sermon II, n. 2

This horn had eyes like a man, and a mouth that spoke arrogantly… He will come in a time of tranquility and seize the kingdom by intrigue. (Dan 11:21)

After this Judas rises up, some Church Fathers suggest that eventually he will probably take residence in the temple (of Jerusalem?).

At first indeed he will put on a show of mildness (as though he were a learned and discreet person), and of soberness and benevolence: and by the lying signs and wonders of his magical deceit having beguiled the Jews, as though he were the expected Christ, he shall afterwards be characterized by all kinds of crimes of inhumanity and lawlessness, so as to outdo all unrighteous and ungodly men who have gone before him; displaying against all men, but especially against us Christians, a spirit murderous and most cruel, merciless and crafty. —St. Cyril of Jerusalem, Church Doctor (c. 315-386), Catechetical Lectures, Lecture XV, n.12

With the rise of Antichrist, the Day of Justice has arrived, with the son of perdition becoming, in part, an instrument of God’s purification. Just as a day begins in darkness, so too does the “Day of the Lord,” which eventually turns into Light.

‘And He rested on the seventh day.’ This means: when His Son will come and destroy the time of the lawless one and judge the godless, and change the sun and the moon and the stars—then He shall indeed rest on the Seventh day… —Letter of Barnabas, written by a second century Apostolic Father

But before the Day of the Lord, God will sound trumpets of warning… the Seven Trumpets of Revelation. That in Part VII…