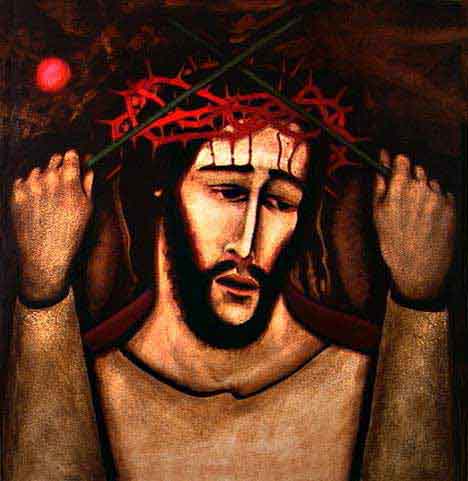 The Crowning With Thorns, by Michael D. O’Brien

Blow the trumpet in Zion, sound the alarm on my holy mountain! Let all who dwell in the land tremble, for the day of the LORD is coming. (Joel 2:1)

THE Illumination will usher in a period of evangelization that will come like a flood, a Great Flood of Mercy. Yes, Jesus, come! Come in power, light, love, and mercy!

But lest we forget, the Illumination is also a warning that the path the world and many in the Church itself have chosen will bring terrible and painful consequences upon the earth. The Illumination will be followed by further merciful warnings that begin to unfold in the cosmos itself…

In the Gospels, after cleansing the temple, Jesus addressed the scribes and Pharisees with seven prophetic woes:

Woe to you, scribes and Pharisees, you hypocrites. You are like whitewashed tombs, which appear beautiful on the outside, but inside are full of dead men’s bones and every kind of filth… You serpents, you brood of vipers, how can you flee from the judgment of Gehenna?… (see Matt 23:13-29)

So too, there are seven warnings or trumpets issued against the “scribes and Pharisees, the hypocrites” in the Church who have compromised the Gospel. The warning of this imminent Day of the Lord (the “day” of judgment and vindication) is announced by the blasts of Seven Trumpets in Revelation.

So who is blowing them?

THE ARRIVAL OF THE TWO WITNESSES

Before the rise of Antichrist, it appears that God sends Two Witnesses to prophesy.

I will grant my two witnesses power to prophesy for one thousand two hundred and sixty days, clothed in sackcloth. (Rev 11:3)

Tradition has often identified these Two Witnesses as Elijah and Enoch. According to the Scriptures, they never suffered death and were taken into paradise. Elijah was taken away in a fiery chariot while Enoch…

…was translated into paradise, that he may give repentance to the nations. (Ecclesiasticus 44:16)

The Fathers of the Church have taught that the Two Witnesses will return to earth someday to give powerful testimony. In his commentary on the book of Daniel, Hippolytus of Rome wrote:

And one week shall confirm a covenant with many; and in the midst of the week it shall be that the sacrifice and oblation shall be removed—that the one week might be shown to be divided into two. The two witnesses, then, shall preach three years and a half; and Antichrist shall make war upon the saints during the rest of the week, and desolate the world… —Hippolytus, Church Father, The Extant Works and Fragments of Hippolytus, “The interpretation by Hippolytus, bishop of Rome, of the visions of Daniel and Nebuchadnezzar, taken in conjunction”, n.39

Here, Hippolytus places the Witnesses in the first half of the week—just as Christ preaches the Seven Woes during the first half of the Passion week. At some point, following the Illumination then, the Two Witnesses may literally appear on earth to call the world to repentance. While in St. John’s symbolism it is angels who blow the trumpets, I believe it is God’s prophets who are commissioned to speak these “woes” to the world. One reason is that at the end of their 1260 days of prophesying, St. John writes:

We know from earlier in St. John’s vision that the first two woes comprise the first six trumpets (Rev 9:12). Thus, they are blown during the prophetic ministry of Elijah and Enoch.

I believe the betrayal of Jesus by His own people—and the Church by her own members—is portrayed in the Seven Trumpets of Revelation. They are symbolic of a coming schism in the Church and a literal forewarning of its consequences upon the world. It begins with the angel holding the Gold censer:

Then the angel took the censer, filled it with burning coals from the altar, and hurled it down to the earth. There were peals of thunder, rumblings, flashes of lightning, and an earthquake. (Rev 8:5)

We immediately hear again the familiar sounds that accompanied the Illumination—the sound of impending justice in the thunder:

The trumpet blast grew louder and louder while Moses was speaking and God answering him with thunder. (Ex 19:19)

These burning coals, I believe, are those apostates who have been Cleansed from the Temple and who have refused to repent. They are cast down to the “earth” where the Dragon is cast to by St. Michael (Rev 12:9). Satan is exorcised from the “heavens,” while on the natural plane, his followers are excommunicated from the Church (thus, the angel holding the censer may be symbolic of the Holy Father, for St. John sometimes symbolizes Church leaders as “angels.”)

Recall that the Book of Revelation began with seven letters written to the seven Churches of Asia—the number “seven” again is symbolic of wholeness or perfection. Thus, the letters may apply to the whole Church. Though bearing words of encouragement, they also call the Church to repentance. For she is the light of the world who scatters the darkness, and in some ways, particularly the Holy Father himself, is also the restrainer holding back the powers of darkness.

Thus, the letters of Revelation set the stage for judgment, first of the Church, and then the world. The letters are addressed to the “seven stars” who appear in Jesus’ hand at the beginning of the vision to St. John:

Again, “angels” likely means the pastors of the Church. Scripture tells us that a portion of these “stars” will fall away or be cast out in an “apostasy” (2 Thess 2:3).

First there falls from the sky “hail and fire mixed with blood” then a “burning mountain” and then a “star burning like a torch” (Rev 8:6-12). Are these trumpets symbolic of the “scribes, elders and chief priests,” that is, a third of priests, bishops, and cardinals? Indeed, the Dragon “swept away a third of the stars in the sky and hurled them down to the earth” (Rev 12:4).

What we read in Chapter 8 is the resulting “damage” this brings to the entire cosmos, foremost spiritually. It is universal, thus St. John envisions this devastation symbolically as “four” trumpets (as in the “four corners of the earth.”) The damage to the cosmos is always described as a “third,” equivalent to the number of stars that are swept away.

Since St. John later describes the Church as “a woman clothed with the sun, with the moon under her feet, and on her head a crown of twelve stars” (12:1), the fourth trumpet may be symbolic of the rest of the Church—lay, religious etc.—losing “a third of their light.”

Repent, and do the works you did at first. Otherwise, I will come to you and remove your lampstand from its place, unless you repent. (Rev 2:5)

But is this all merely symbolic? I believe the trumpets St. John sees, while symbolic of the schism, are foreshadowing real and cosmic consequences which will find their fulfillment in the Seven Bowls. As St. Paul says, “the whole creation has been groaning with labor pains” (Rom 8:2). These consequences are the trumpets, prophetic warnings issued by the Two Witnesses against those who have split from the true Church, and the world at large, which has rejected the Gospel. That is, the Two Witnesses have been given power by God to back up their prophesying with signs—regional chastisements which indeed sound very much like the Trumpets themselves:

They have the power to close up the sky so that no rain can fall during the time of their prophesying. They also have power to turn water into blood and to afflict the earth with any plague as often as they wish. (Rev 11:6)

Thus the Trumpets may be both spiritually symbolic and somewhat literal. Ultimately, they are a warning that following the New World Order and its rising leader, the Antichrist, will result in unparalleled devastation—a warning echoed in the Fifth Trumpet about to be blown…