I wrote in The Great Deception series that the stage has been set for the “final confrontation.” The world has been fed a steady diet of junk food by the Dragon, as the enemy tries to lure countless souls away from God with false “fruit and vegetables”—a false peace, false security, and false religion. But God, whose grace abounds where sin abounds, has also prepared a Banquet. And He is about to send invitations out into the byroads of the world to invite “the good and the bad”, whoever will come (Matt 22:2-14).

It is Mary’s little army being prepared now in “the Bastion” who will be sent out to make the invitation.

BORN FOR THIS HOUR

The Blessed Virgin, the “woman clothed in the sun,” is giving birth to a remnant prepared for this hour of evangelization. It says in Scripture that,

She gave birth to a son, a male child, destined to rule all the nations with an iron rod. Her child was caught up to God and his throne. (Rev 12:5)

When this remnant is fully formed, it will be “caught up to God and his throne.” That is, it will be given a new mantle of His full authority.

[He] raised us up with him, and seated us with him in the heavens in Christ Jesus, that in the ages to come he might show the immeasurable riches of his grace in his kindness to us in Christ Jesus. (Eph 2:6-7)

One of those ages is the coming one: the Era of Peace. But before then, there is to be a great battle for souls.

Once again, remember that the “Woman” in Revelation 12 is both Mary and the Church. So while the remnant Church is “caught up to Heaven”, it also says:

That is, the Church still remains on earth. She is not “raptured” as some erroneously believe. Rather, this is a remnant whose mind is fixed on the things above while living here below; a people who have left behind the things of this world, and embraced the things of God; a flock who has counted everything else as loss so as to gain Christ, and thus it shares:

in this fullness in him, who is the head of every principality and power. (Col 2:10)

The “Woman-Church” remains on earth to give birth to “the full number of Gentiles”, but is spiritually safe and secure in the refuge of God’s own heart, covered in the mantle of His authority. That is, she is clothed with the Son.

After the woman gives birth, there is a war in the heavens. As I wrote in The Exorcism of the Dragon, this is going to be a time when the remnant, in the power and authority of the name of Jesus, is going to cast Satan “to the earth” (Rev 12:9). It is the Great Hour of Evangelization and part of the dramatic climax of this “final confrontation” as Pope John Paul called it—a period lasting three and a half years, according to Scripture (symbolic perhaps of a “short time”.) It is The Time of the Two Witnesses:

I will commission my two witnesses to prophesy for those twelve hundred and sixty days, wearing sackcloth. (Rev 11:3)

These two witnesses, though they may refer to the return of Elijah and Enoch, also symbolize Mary’s army, or part of it, prepared for the prophetic pronouncement of the final days of mercy. It is the Hour of the Great Harvest.

After this the Lord appointed seventy-two others whom he sent ahead of him in pairs to every town and place he intended to visit. He said to them, “The harvest is abundant but the laborers are few; so ask the master of the harvest to send out laborers for his harvest. Go on your way; behold, I am sending you like lambs among wolves. Carry no money bag, no sack, no sandals; and greet no one along the way.” (Luke 10:4)

These are souls who have heeded the call to “Come out of Babylon!” into a life of simplicity, to a “Voluntary Disposession” of material things so as to be available to God for whatever mission He has ordained for them. Materialism creates a noise in the soul which obscures the voice of God. By contrast, the spirit of detachment enables the soul to hear its instructions for these times:

This simplicity of heart is denoted by the two witnesses “wearing sackcloth.”

I believe these will be the days of the final sifting before the “door of the Ark” closes, and the Day of the Lord arrives to purify the earth for a “civilization of love” (see also Two More Days to understand what is meant by a “Day”).

It will be a time of extraordinary signs and miracles as these witnesses proclaim that the Kingdom of God is at hand (Rev 11:6). It will be a period in which Satan will experience crushing defeats beneath the heel of the “Woman-Church” who will be guided by God’s providence.

When the dragon saw that it had been thrown down to the earth, it pursued the woman who had given birth to the male child. But the woman was given the two wings of the great eagle, so that she could fly to her place in the desert, where far from the serpent, she was taken care of for a year, two years, and a half-year. (Rev 12:13-14)

Then, writes St. John, the battle enters its final phase with the rise of a Beast out of the abyss and a persecution of all those “who keep God’s commandments and bear witness to Jesus” (Rev 11:7; 12:17; 24:9).

Be certain of this: Christ and His Body will be victorious in every stage of the final confrontation. He will be nearer to us than our breath. We will live and move and have our being in Him. He does nothing without first telling His prophets (Amos 3:7). It is for this hour that I believe we were created. Glory be to God!

I am troubled now. Yet what should I say? ‘Father, save me from this hour’? But it was for this purpose that I came to this hour. Father, glorify your name… From now on I am telling you before it happens, so that when it happens you may believe that I AM. (John 13:19)

We need to listen very carefully to Pope Benedict who is leading the way for the Church. He is preaching a necessary and powerful message to the world: Christ our hope. As we experience even now the first tremors of the Great Shaking and what often seems to be a growing spiritual darkness, we need to keep our eyes fixed on Jesus who holds the scepter of victory in His right hand. I believe it is precisely because of the disturbing degeneracy of our times that the Holy Father has been inspired to focus on that which, when all is said and done, will remain: faith, hope, and love. And the greatest of these is love, who is a person: Jesus.

The power to destroy does remain. To pretend otherwise would be to fool ourselves. Yet, it never triumphs; it is defeated. This is the essence of the hope that defines us as Christians. —POPE BENEDICT XVI, St. Joseph’s Seminary, New York, April 21st, 2008 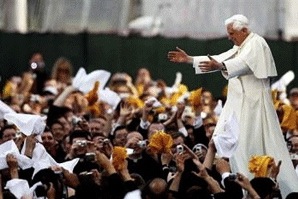