THE NOW WORD ON MASS READINGS
for May 14th, 2014
Wednesday of the Fourth Week of Easter
Feast of St. Matthias, Apostle 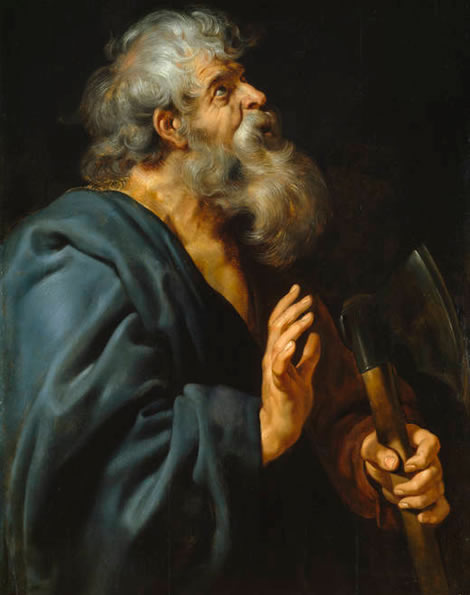 I often ask non-Catholics who wish to debate the Church’s authority: “Why did the Apostles have to fill the vacancy left by Judas Iscariot after his death? What’s the big deal? St. Luke records in the Acts of the Apostles that, as the first community gathered in Jerusalem, ‘there was a group of about one hundred and twenty persons in the one place.’ [1]cf. Acts 1:15 So there were plenty of believers on hand. Why, then, did the office of Judas have to be filled?”

As we read in today’s first reading, St. Peter quotes the Scriptures:

May another take his office. Therefore, it is necessary that one of the men who accompanied us the whole time the Lord Jesus came and went among us, beginning from the baptism of John until the day on which he was taken up from us, become with us a witness to his resurrection.

Zoom several decades ahead, and one reads in St. John’s vision of the New Jerusalem that there are indeed twelve apostles:

The wall of the city had twelve courses of stones as its foundation, on which were inscribed the twelve names of the twelve apostles of the Lamb. (Rev 21:14)

Certainly, Judas the betrayer was not one of them. Matthias became the twelfth stone.

And he was not to be just another observer, a mere witness among many; he became part of the very foundation of the Church, taking on the powers of the office established by Christ Himself: the authority to forgive sins, bind and loose, administer the Sacraments, transmit the “deposit of faith,” [2]—which is why the Apostles chose someone who had been with Jesus from the beginning until His resurrection and continue himself, through the “laying on of hands,” the transmission of apostolic authority. And against the argument that apostolic succession is somehow a man-made tradition, St. Peter confirms that it is the Lord building His Church, choosing His living stones:

You, Lord, who know the hearts of all, show which one of these two you have chosen to take the place in this apostolic ministry from which Judas turned away to go to his own place.

We don’t know a great deal about St. Matthias. But no doubt he felt the words of today’s Psalm acutely under the weight of his newly appointed office:

He raises up the lowly from the dust; from the dunghill he lifts up the poor to seat them with princes, with the princes of his own people.

Christ builds His Church on weakness so He can raise her in strength.

The implications of apostolic succession, then, are not little. For one, it implies that the Church is not just some homogenous spiritual blob, but a structured body with a leadership. And that implies, therefore, that you and I are to humbly submit to that teaching authority (what we call “the Magisterium”) and pray for those who must carry both the honor and cross of this duty. As Jesus said in today’s Gospel:

We know what those commandments are precisely because it is preserved by the Holy Spirit through apostolic succession. Where the successors are in communion with “Peter”, the Pope—there is the Church.