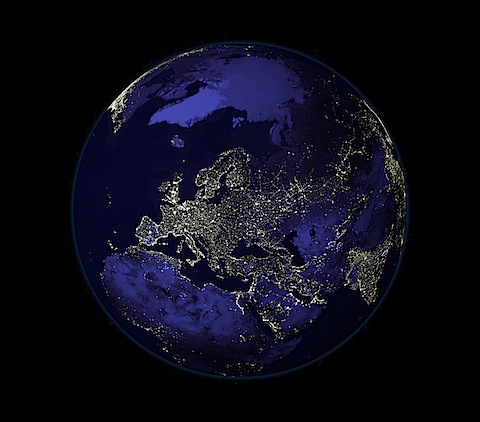 AS I prayed before the Blessed Sacrament, I heard the words clearly in my heart:

The world is going to change.

The sense is that there is an enormous event or turn of events coming, which will change our day to day lives as we know them. But what? As I have pondered this question, a few of my writings have come to mind…

THE UNFOLDING IN OUR TIMES

At the end of 2007, I heard in my heart the words that 2008 would be the Year of the Unfolding. Not that everything would unfold at once, but that there would be definitive beginnings. Indeed, in the autumn of that year, we saw the beginnings of an economic collapse, so rapid, so deep, so broad, that it is continuing to shake the foundations of global stability. As a result, it has sparked an open demand from several world leaders for a "new world order." This demand has not diminished, but only increased as world leaders push for "global solutions" and even a "global currency." Pope Benedict has warned in his new encyclical that such globalization must be properly guided:

…without the guidance of charity in truth, this global force could cause unprecedented damage and create new divisions within the human family. —POPE BENEDICT XVI, Caritas in Veritate, Ch. 2, v.33x

Herein lies the concern: world leaders are not moving toward an embrace of the Gospel and the culture of life, but an anti-gospel and a culture of death. I have written about this in my new book The Final Confrontation, explaining how this battle was foreseen by the Holy Fathers and announced by John Paul II (see also Benedict, and The New World Order).

However, I don’t believe that all these world leaders are evil men with an evil plan. In fact, I believe there are few truly evil people in the world—but that there are many souls that are truly deceived. In this regard, another writing continually comes back to mind in which I had the impression in my heart that an angel was crying out over the earth the words:

The spirit of the world, which is rightly called the spirit of antichrist, is so thick and pervasive, that many even in the Church do not see it. We have collectively been numbed not only to the reality of what is unfolding around us, but we "devout Christians" do not realize how far we have fallen. Jesus’ words come to mind:

I hold this against you: you have lost the love you had at first. Realize how far you have fallen. Repent, and do the works you did at first. Otherwise, I will come to you and remove your lampstand from its place, unless you repent. (Rev 2:4-5)

What is the love we had at first? It was a burning zeal for souls. This thirst for souls is what led our Savior to the Cross, it is what drove St. Paul across land and sea, St. Ignatius to the lions, St. Francis to the poor, St. Faustina to her knees. The heartbeat of the Christian should be the heartbeat of the Savior: a desire to save souls from the fires of hell. When we have lost this desire, we have lost our heartbeat, and Christians, the Church, will seem as nearly dead. How is it that we have arrived at a time when "going to Mass" is equated to being a good Catholic? The Great Commission of the Church—of every single believer—is "to make disciples of all the nations." Pope Paul VI said the Church exists to evangelize.  Is the Lord not saying to us today:

It is in this climate, in fact, that an angel from God now warns you and I: the Church has been handed over for her purification, and the instrument of this purification will be a world order that controls. How? Through a spirit of fear. For the opposite of love is fear. Love is free, it gives, it believes, it trusts. Fear chains the mind, it clutches freedom, it doubts, it refuses absolutes, and trusts no one. Thus, the environment, the economy, plague and war will become the catalysts of this purification, that is, the seals of Revelation. They are becoming the means by which mankind will be controlled, whether the crises are real or man-made.

A Canadian "mystic", whom I have come to know and believe may be genuinely hearing the Lord, is a woman who goes by the name "Pelianito". In one of her brief meditations, she echoes words that I am beginning to hear consistently from many souls throughout the world: It is worth discerning such voices:

My child, pray! For a silence and a sadness is coming to my people. My children have turned against me. I am betrayed once again into the hands of the enemy. Who will stay with me at the foot of the cross? Who will run and scatter? Little child, pray for grace, the grace to stay at the foot of the cross with our Mother. A day will come when all that is familiar will be changed or gone. I say this not to cause you anxiety, but to prepare your heart for the coming trial. Remember always that I am with you. Remember the prayer, and pray it often. Pray it with my Mother at the foot of the cross. Through her tears and anguish she never lost faith—’Jesus I trust in you.’ —see www.pelianito.stblogs.com

HOPE IN HIS MERCY

If we respond with fear to this message, it is because we are not yet fully trusting in God’s plan and presence in our lives. He is here! He is with us! With Him, Hope is ever present! But it is not a hope divorced from reality. Pope Benedict reaffirmed recently what has been a central theme on this website: that the Church will follow Christ in His Passion.

The Church walks the same path and suffers the same destiny as Christ since she acts not on the basis of any human logic or relying on her own strength, but instead she follows the way of the cross, becoming, in filial obedience to the Father, a witness and a traveling companion for all humanity. —Message for 83rd World Mission Day; Sept 7th 2009, Zenit News Agency

In one sentence, the Holy Father places all things in context. The Church must take up the "destiny" of Christ, but in so doing, she will become "a witness and a traveling companion for all humanity." How
beautiful are these words. For when these last trials of our era shake the planet to her foundations, when the world as you and I know it vanishes like mist in a fire, know that the hour of the Church’s greatest witness will have arrived. And our cry, our song, our word must be this: HE IS MERCY. HE IS ALL MERCY. TRUST IN HE WHO IS MERCY. We will witness His mercy, and Mercy will become the generous companion of all who embrace Him.

The time of our preparation is going to end, and the world as we know it is going to change. But when it does, and when The Final Confrontation is over, the world will change for the better. For Christ has already won the battle.

Today, if we pay close attention, if we do not perceive only the darkness but also what is light and good in our time, we see how faith makes men and women pure and generous, and educates them to love. Weeds exist also in the bosom of the Church and among those whom the Lord has called to His special service. But the light of God has not gone out, the good wheat has not been choked by the weeds of evil… Is the Church, then, a place of hope? Yes, because from her the Word of God comes ever and anew, purifying us and showing us the path of faith. She is a place of hope because in her the Lord continues to give Himself to us in the grace of the Sacraments, in the words of reconciliation, in the multiple gifts of His consolation. Nothing can darken or destroy all this, and so we should be glad amidst all the tribulations. —POPE BENEDICT XVI, May 15th, 2010, Vatican City, VIS

This writing was first published September 26th, 2009. It has been updated as these words are only increasing in urgency and imminence.