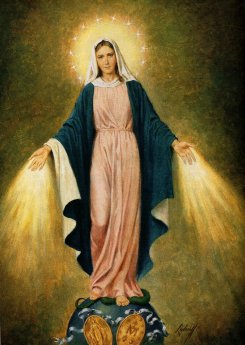 Our Lady of the Miraculous Medal, Artist Unknown

MORE letters continue to come in from reader’s whose Marian statues have a broken left hand. Some can explain why their statue broke, while others cannot. But perhaps that is not the point. I think what is significant is that it is always a hand.

I have written elsewhere of the significance of the period we live in:  a "time of grace," as it has been called. While I believe that this period’s "final countdown" began with the message of Mercy given to St. Faustina, the "time of grace" could conceivably be traced to the apparition of Our Lady to St. Catherine Labouré, whose remains are incorrupt to this day.

The Marian message to the modern world begins in seed form in the revelations of Our Lady of Grace at Rue du Bac, and then expands in specificity and concretization throughout the twentieth century and on into our own time. It is important to remember that this Marian message maintains its fundamental unity as one message from one Mother. —Dr. Mark Miravalle, Private Revelation—Discerning With the Church; p. 52

It is significant that she is called "Our Lady of Grace" at the beginning of this Marian era. During one apparition, Mary appeared to St. Catherine with rays of light—grace—pouring forth from her hands. Our Lady then asked that St. Catherine have a medal struck in that image, promising that,

"With confidence," that is, faith in God—Jesus Christ—which is the central message of the Gospel. It wouldn’t be the first time that God has chosen to use objects to be instruments of grace (see Acts 19:11-12).  However, the point here is that those graces are not coming from a piece of metal, but pouring forth from the Cross and through Our Lady’s hands. 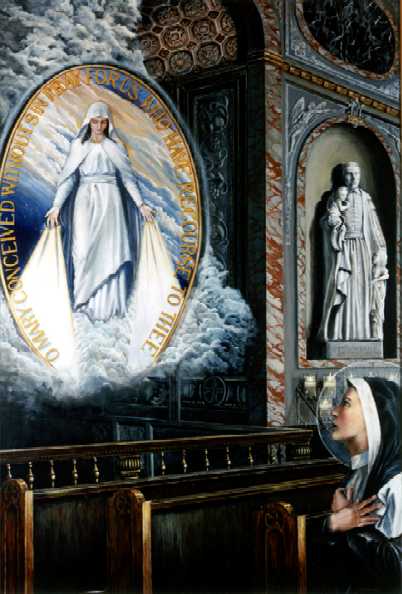 This motherhood of Mary in the order of grace continues uninterruptedly from the consent which she loyally gave at the Annunciation and which she sustained without wavering beneath the cross, until the eternal fulfillment of all the elect. Taken up to heaven she did not lay aside this saving office but by her manifold intercession continues to bring us the gifts of eternal salvation . . . . Therefore the Blessed Virgin is invoked in the Church under the titles of Advocate, Helper, Benefactress, and Mediatrix. —Catechism of the Catholic Church, n. 969

All this is to say, could these accounts of hands broken from Marian statues be a warning that the time of grace is expiring? If we consider all the social and environmental upheaval in the world, it may in fact be one more sign that great change is about to burst upon an unsuspecting world.

If this time of grace is beginning to expire, know that Mary would would never walk away from her children! I believe more than ever that she will be with her "little remnant" to the very end, for Jesus her Son promised us the very same:

It might also be that the missing hands indicate that Mary is increasingly unable to give the graces she longs to give, because more and more souls are turning away from God. There may be other significant interpretations, but at the least we should realize that the time of divine Mercy is drawing to a close and the time of His Justice approaches. Therefore, isn’t it totally consistent with her pure and loving heart that she desires to warn us in any way she can?

Where Christ is, so is Mary. Is she not also part of His mystical Body? How much more so since He took His very flesh from her womb! They are united in a very special way, and her role, as the Church teaches, did not cease with the Assumption, but will continue until the last of her children enters the gates of Heaven.

I know my Protestant brothers and sisters will struggle with this seeming emphasis on Mary rather than Jesus. But let me repeat…

This time of grace we live in, I believe, is the time of "filling our lamps" with oil. As I wrote in The Smoldering Candle, the light of Jesus is being extinguished in the world, but growing brighter and brighter in the hearts of those who are remaining faithful (whether or not they may feel this sensibly.) There will come a time when this grace will not be available, at least in the "ordinary" sense; when Mary’s special presence will be withdrawn, and the Time of Mercy will collide with the Day of Justice.

At midnight, there was a cry, ‘Behold, the bridegroom! Come out to meet him!’ Then all those virgins got up and trimmed their lamps. The foolish ones said to the wise, ‘Give us some of your oil, for our lamps are going out.’ But the wise ones replied, ‘No, for there may not be enough for us and you. (Matt 25:6-9)

The deceiver is at work now as never before, distracting and tempting the Body of Christ so that they will not be about the work of filling their lamps with oil: the oil of prayer, repentance, and faith. O beloved, how dangerous are these days! We should not take them lightly! Be sure you are one of the "wise" ones.

The beginning of wisdom is the fear of the LORD, and knowledge of the Holy One is understanding. (Proverbs 9:10)

The trumpets have sounded, and the warning has gone forth over the whole earth:

Repent and believe the Good News, for the time is short!

I just received this letter from a young reader:

I am an altar server in highschool. One day after I went home from Mass (8/16/08, 6:00 PM), I went in my room to say a Rosary but stopped short because I heard an unusual noise. It sounded like a ram’s horn. Then I heard a fairly loud voice, very beautiful but very shrill, like an opera singer’s voice. This voice sounded like it was proclaiming something. Our Lord had me recognise this voice as an angel’s voice. The ram’s horn went on and on by itself for a few minutes, and then I heard mournful and repetitive singing (while the horn
was going in the background). Now, I do not have mental problems or anything of the sort, and do not hear voices in my head. I also test the spirits, as my mother and the Holy Bible teaches. My room was the only place where I could hear this singing, so I told my mother what I heard and she went in my room to see if she could hear it, too. Sure enough, she could hear the singing as well. I have heard the angels every day since then. I heard the horn only a few days more after that day and now it is gone.

Out of the mouths of babes.

O Mary, conceived without sin, pray for us who have recourse to thee. —Words inscribed on the Miraculous Medal