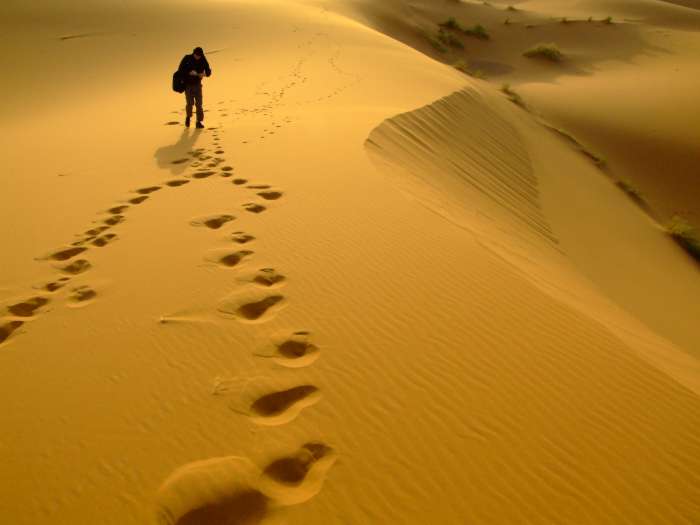 THIS call “out of Babylon” into the desert, into the wilderness, into asceticism is truly a call into battle. For to leave Babylon is to resist temptation and to break at last with sin. And this presents a direct threat to the enemy of our souls. For the one who begins to follow Christ, the one who begins to shine with His light, to speak with His words and to love with His heart, is a terror to demons and a destroyer of the kingdom of Satan. Hence, to become an Ascetic in the City is at once to withdraw from the world and, at the same time, to enter into spiritual warfare. And this demands, then, faithfulness to prayer, fasting, and a sincere rooting out of sin—an authentic “dying to self.” It means preparing oneself to encounter the desert beasts, scorpions, and mirages that will attempt to lure, entice, and tempt the soul to fall away—that is, “all that is in the world, sensual lust, enticement for the eyes, and a pretentious life.” [1]cf. 1 John 2:16

Thus, one cannot truly follow Christ without the virtue of persistence.

BLESSED ARE THE MEEK

I know you are tired. So am I. The wall of temptations, the whirlwind of time, and the challenges we face as Christians present some formidable foes. Nonetheless, you and I were born for these days, and so, every grace will be made available for us, too.

Jesus said, “Blessed are the meek, for they will inherit the land.” [2]Matt 5:5 The haughty and slothful soul gives up when it becomes too difficult. But the meek soul, without understanding every “how” and “why” God does what He does, nonetheless perseveres. And when he or she does, the Lord will bless their faithfulness. They will “inherit the land,” that is, “every spiritual blessing in the heavens.” [3]Eph 1:3

Hannah, despite her disappointment that she has not conceived a child, keeps the course, remaining faithful in prayer and attitude. And God eventually blesses here with a child (see Monday’s and Tuesday’s first readings). Samuel persists in offering himself to the One who calls to him in prayer: “Here I am… Speak, for your servant is listening.” The Lord does not reply immediately. But Samuel learns to listen to the “still small voice” of the Lord, and thus…

Samuel grew up, and the LORD was with him, not permitting any word of his to be without effect. (Wednesday First reading)

Saul, son of Kish, is sent by his father to go find the “asses” that had wandered off. In obedience, he sojourned through the hill country in search of them, but without success. In his quest, however, he was led to Samuel, God’s prophet, who anointed Saul to be king of Israel. (Saturday’s first reading)

Indeed, the “asses” in our life are those tasks, duties, and mundane obligations that we are nonetheless called to fulfill—the duty of the moment. [4]cf. The Duty of the Moment But when done with great love and attention, they become an unexpected source of God’s anointing. Indeed, we share in the kingship of Christ when we imitate the King’s obedience, putting selfish tendencies under the dominion of God’s Word.

But the foundation of charity is prayer, the font of grace. We can neither “conceive” holiness nor persevere in holiness without consistent prayer. We need both Hannah’s honesty, supplication, and thirst—our movement toward God—and then the attentive listening of Samuel—awaiting the movement of God toward us. Both require the virtue of persistence.

In order to enter the desert of transformation, we need to understand what we are undertaking: the complete renovation of our souls. When Jesus began His public ministry, He had a clear vision of His mission, and He wasted no time in announcing it:

Repent, and believe in the Gospel. (Monday’s Gospel)

This is the essence of Christian conversion: a departure from sin and an embrace and integration of the Gospel into every fiber of one’s life. For we are sick through our sin, and need healing. Everyone of us.

Those who are well do not need a physician, but the sick do. I did not come to call the righteous but sinners. (Saturday’s Gospel)

If there is no repentance, no wrestling with sin, no serious examination of conscience, then one will waste his life constantly seeking out the illusory mirage of comfort that cannot change a soul, much less save and sanctify it. Every mature Christian has to acknowledge that we are in a battle—not with “destiny” or so-called “bad karma”—but with principalities and powers bent on our destruction. [5]cf. Eph 6:12 And thus, the first miracle Jesus performs in the Gospel of Mark is to cast out demons (Tuesday’s Gospel). The nature of the battle is immediately defined.

But then, Jesus shows us that such a battle can only be won on our knees. Constantly, we read that He finds His way to “deserted places”.

Rising very early before dawn, he left and went off to a deserted place, where he prayed. (Wednesday’s Gospel)

Jesus reveals how to be an “ascetic in the city”: by constant communion with the Father in prayer.

The grace of the Kingdom is “the union of the entire holy and royal Trinity…with the whole human spirit.” Thus, the life of prayer is the habit of being in the presence of the thrice-holy God and in communion with him… We learn to pray at certain moments by hearing the Word of the Lord and sharing in his Paschal mystery, but his Spirit is offered us at all times, in the events of each day, to make prayer spring up from us. —Catechism of the Catholic Church, n. 2565, 2659

Yet, the Catechism adds…

…we cannot pray “at all times” if we do not pray at specific times, consciously willing it. —n. 2697

And thus, I go back to my original statement, that we cannot enter the desert in any serious way without a firm commitment to prayer accompanied also by intermittent fasting, regular nourishment from the Eucharist, and frequent Confession.

He remained outside in deserted places, and people kept coming to him from everywhere. (Thursday’s Gospel)

And here we have the key and soul of the apostolate, of the
ministry that every one of us is called to in his or her own way so as to also become “fisher’s of men” (Monday’s Gospel): prayer transforms our interior life into Christ’s life; He who is the “light of the world” in turn makes us the “light of the world” [6]cf. Matt 5:14 insofar as our prayer is also wed to the action it calls forth. Such a soul is feared by demons, because he shines so utterly bright in the darkness that the lost sheep come from afar to find him, attracted by the Voice of the Good Shepherd they hear in him. Such a man or woman of God becomes an oasis in the desert such that others will seek them out to drink from the “living waters” that flow from their very beings. [7]cf. Living Wells Oh how the world is longing to drink from such a soul! From such a saint!

This century thirsts for authenticity… The world expects from us simplicity of life, the spirit of prayer, obedience, humility, detachment and self-sacrifice. —POPE PAUL VI, Evangelization in the Modern World, 22, 76

Why, beloved, can it not be you?

For human beings this is impossible, but for God all things are possible. (Matt 19:26)

Prayer for the Virtue of Persistence

God forgive me for dragging my feet. For seeking out comfort rather than the cross. For delaying my conversion, and thus, imperiling the conversion of others. For drifting along with the currents of the world rather than diving into the deep, where You are. Lord, help me to enter the desert in steadfastness, to at last become a man (woman) of God, a mature Christian, and thus a terror to demons and a consolation for the lost. Lord, I fear I am too late. And yet, You make all things work to the good. And so, I wish to join Peter, Andrew, and Levi and the whole company of Apostles to whom you beckon “Follow me” (Saturday’s Gospel). They followed you in ignorance, but as willing students. I am both ignorant and a willing student, O Lord. Yes, “Here I am. You called me. Speak, for your servant is listening.” (Wednesday’s first reading) And grant unto me the virtue of persistence until at last You have conquered my heart.

Prayer in the Moment

The Canadian exchange rate is at another historic low. For every dollar you donate to this ministry at this time, it adds almost another $.40 to your donation. So a $100 donation becomes almost $140 Canadian. You can help our ministry even more by donating at this time.
Thank you, and bless you!

NOTE: Many subscribers have recently reported that they are not receiving emails any longer. Check your junk or spam mail folder to make sure my emails aren’t landing there! That is usually the case 99% of the time.