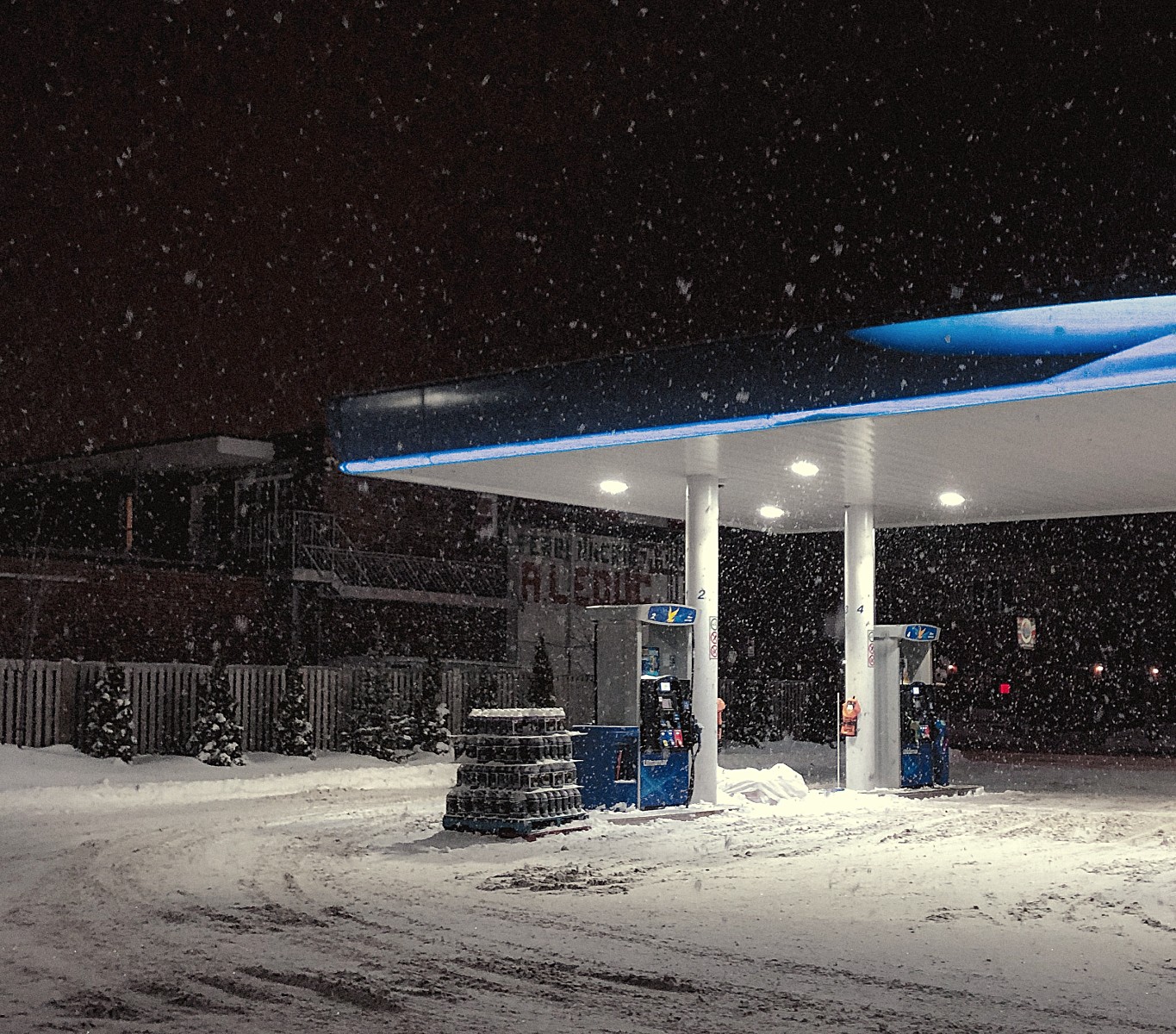 IT was the end of a long winter concert tour across Canada—nearly 5000 miles in all. My body and mind were exhausted. Having finished my last concert, we were now a mere two hours from home. Just one more stop for fuel, and we would be off in time for Christmas. I looked over at my wife and said, “All I want to do is light the fireplace and lie like a lump on the couch.” I could smell the woodsmoke already.

A young boy came and stood by the pump waiting for my instructions. “Fill ‘er up—diesel,” I said. It was a frigid -22 C (-8 Farenheit) outside, so I crawled back into the warm tour bus, a big 40 foot motorhome. I sat there in my chair, my back aching, thoughts drifting toward a crackling fire… After a few minutes, I looked outside. The gas jockey had gone back inside to warm himself, so I decided to go out and check the pump. It’s a big tank on those motorhomes, and takes up to 10 minutes to fill sometimes.

Gas will destroy a diesel engine, and I had three of them running! One for heating, one for the generator, and then the main engine. I stopped the pump immediately, which by now, had discharged close to $177.00 of fuel. I ran into the bus and shut down the heater and generator.

I immediately knew the night was ruined. We were going nowhere. The burning embers in my mind were now smoldering ashes. I could feel the heat of frustration beginning to boil in my veins. But something inside told me to stay calm…

I walked into the gas station to explain the situation. The owner happened to be there. She was on her way home to prepare a turkey meal for 24 people coming over that evening. Now her plans were in jeopardy as well. The gas jockey, a boy of perhaps 14 or 15 years, stood there sheepishly. I looked at him, feeling frustrated… but inside me was a grace, a steady peace which told me to be merciful.

But as the temperature continued to plunge, I was worried that the water systems on the motorhome would begin to freeze. “Lord, this is going from bad to worse.” My six children were on board and my 8 months pregnant wife. The toddler was sick, throwing up in the back. It was getting very cold inside, and for some reason, the breaker was tripping when I tried to plug the motor home in to the gas station’s power. Now the batteries were going dead.

My body continued to ache as the owner’s husband and I drove through the town looking for some means to dispose of the fuel. When we got back to the gas station, a fireman had shown up with a couple of empty barrels. By now, two and half hours had gone by. I was supposed to be in front of my fireplace. Instead, my feet were freezing as we crawled on icy ground to drain the fuel. The words rose in my heart, “Lord, I’ve been preaching the Gospel for you the past month… I’m on your side!”

A small group of men had now gathered. They worked together like an experienced pit-stop crew. It was amazing how everything seemed to be provided for: from tools, to barrels, to manpower, to know-how, to hot chocolate—even supper.

I went inside at one point to warm up. “I can’t believe you’re so calm,” someone remarked.

“Well, what can one do?” I replied. “It’s God’s will.” I just couldn’t figure out why, as I headed back outside.

It was a slow process draining three separate fuel lines. After awhile, I headed back into the station to warm up again. The owner’s wife and another woman were standing there having an animated discussion. She lit up when she saw me.

“An older man walked in here wearing blue,” she said. “He just came in by the door, stood and watched you out there, and then turned to me and said, ‘God has allowed this for a purpose.’ Then he just left. It was so strange that I immediately went outside to see where he went. He was nowhere. There was no car, no man, nothing. Do you think he was an angel?”

I don’t remember what I said. But I began to feel that this night had a purpose. Whoever he was, left me with renewed strength.

Some four hours later, the bad fuel was drained and the tanks refilled (with diesel). At last, the boy who had pretty much avoided me, now met face to face. He apologized. “Here,” I said, “I want you to have this.” It was a copy of one of my CD’s. “I forgive you for what happened. I want you to know that this is how God treats us when we sin.” Turning to the owner, I said, “Whatever you do with him is your business. But I bet he’ll be one of your most attentive jockeys now.” I gave her a CD too, and we finally departed.

Several weeks later, I received a letter from a man who had attended the owner’s Christmas party that cold night.

When she finally came home to the dinner, she told everyone that she had been afraid of facing the motorhome owner (some scream about a $2.00 overfill!), but the motorhome driver told those involved that the Lord is forgiving, and we must forgive each other.

Over Christmas dinner, there was much talk about God’s grace (otherwise he may not have been mentioned except for the Blessing over the meal), and the lesson on forgiveness and love taught by the driver and his family (she said he was a Gospel singer). The driver was an example to one person at the dinner in particular, that not all rich Christians are hypocrites after money (as he formerly claimed), but do walk with the Lord.

The young boy who pumped the gasoline? He said to his boss “I know I’m fired.”

She replied, “If you don’t show up for work on Thursday, you will be.”

While I am not a “rich” Christian by any stretch, I am certainly richer today knowing that God never wastes an opportunity. You see, I thought I was “done” ministering that night as I dreamed of burning logs. But God is always “on”.

No, we are to be witnesses at all times, in season or out. An apple tree does not bear apples only in the morning, but is providing fruit all day long.

The Christian, too, must always be on.