THE NOW WORD ON MASS READINGS
for May 20th, 2014
Tuesday of the Fifth Week of Easter 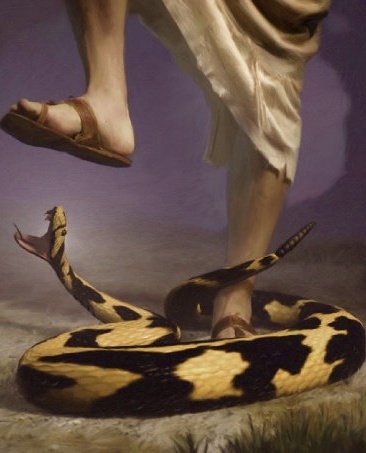 ‘VICTORY over the “prince of this world” was won once for all at the Hour when Jesus freely gave himself up to death to give us his life.’ [1]Catechism of the Catholic Church, n. 2853 The Kingdom of God has been coming since the Last Supper, and continues to come into our midst through the Holy Eucharist. [2]CCC, n. 2816 As today’s Psalm says, “Your kingdom is a kingdom for all ages, and your dominion endures through all generations.” If that is so, why does Jesus say in today’s Gospel:

I will no longer speak much with you, for the ruler of the world is coming.(?)

If the “ruler of the world is coming,” does that not imply that Satan still has power? The answer lies in what Jesus says next:

He has no power over me…

Okay, but what about you and me? Does the Devil have power over us? That answer is conditional. With the death and resurrection of Jesus, Our Lord broke the power of eternal death upon the human race. As St. Paul wrote…

…he brought you to life along with him, having forgiven us all our transgressions; obliterating the bond against us, with its legal claims, which was opposed to us, he also removed it from our midst, nailing it to the cross; despoiling the principalities and the powers, he made a public spectacle of them, leading them away in triumph by it. (Col 2:13-15)

That is to say that sin is the legal claim that Satan held over the human race. But because of Christ’s atonement, whoever repents of sin and puts his faith in Him, is freed from those legal claims—his sins are nailed to the Cross. So when Jesus says to the Apostles…

Peace I leave with you; my peace I give to you… Do not let your hearts be troubled or afraid.

…the peace He gives (not as the world gives) is contingent upon our following, obeying, and trusting in Him. A baptized soul who falls into mortal sin hands back to Satan what Christ claimed. And so, while there is still time, the powers and principalities, world rulers and evil spirits in the heavens [3]cf. Eph 6:12 are battling to gain back what Christ has won, but only as much as they can: soul by soul through the doorway of human free will. Thus, as St. Paul says:

It is necessary for us to undergo many hardships to enter the Kingdom of God. (First reading)

So what shall we do? If you want to be free of the power of Satan, then live between the Confessional and the Altar. The former erases any power that you have temporarily handed over to Satan; the latter invites Jesus present in the Eucharist to live within you. And if He is living in you, then you can say with Jesus: “Satan has no power over me.” [4]In cases where one has opened himself to Satan through vows, pacts, curses, spells, the occult, witchcraft, etc. he may have given darkness a greater foothold that requires prayer and fasting, and in extreme cases, exorcism.

And if you live between the Confessional and the Altar in God’s will, then Christ will reign in and through you, as He promised in yesterday’s Gospel: “Whoever loves me will keep my word, and my Father will love him, and we will come to him and make our dwelling with him.” Such a soul has the power of Christ to trample upon serpents and scorpions, [5]cf. Luke 10:19 and like St. Paul, become a fearless witness of the Word of God. For perfect love casts out all fear, indeed, casts out the ruler of this world.

Thanks for your prayers and support. You are loved!