THE NOW WORD ON MASS READINGS
for May 19th, 2014
Monday of the Fifth Week of Easter 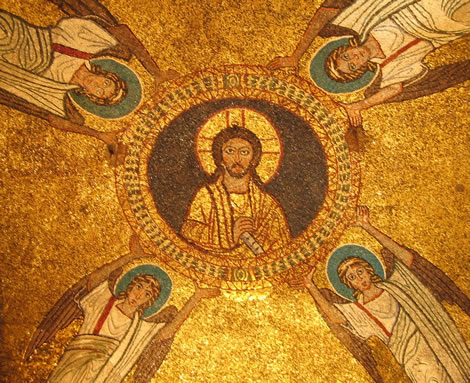 IT is common to hear those opposed to Catholicism invoke arguments such as: Christianity is just borrowed from pagan religions; that Christ is a mythological invention; or that the Catholic Feast days, such as Christmas and Easter, are just paganism with a face-lift. But there is an entirely different perspective on paganism that St. Paul reveals in today’s Mass readings.

In past generations he allowed all Gentiles to go their own ways; yet, in bestowing his goodness, he did not leave himself without witness, for he gave you rains from heaven and fruitful seasons, and filled you with nourishment and gladness for your hearts.

That is to say, while God was slowly revealing a plan of universal salvation through the “chosen people”, He was also revealing Himself in a different ways through the “gospel of nature.” As St. Paul said to the Romans:

For what can be known about God is evident to them, because God made it evident to them. Ever since the creation of the world, his invisible attributes of eternal power and divinity have been able to be understood and perceived in what he has made. (Rom 1:19-20)

“Their beauty is a profession,” said St. Augustine; “the earth he has given to the children of men,” says today’s Psalm.

Thus, in different ways, man can come to know that there exists a reality which is the first cause and final end of all things, a reality “that everyone calls God”… all religions bear witness to man’s essential search for God.  —Catechism of the Catholic Church, n. 34, 2566

But human nature was wounded through original sin; reason became darkened, and man “exchanged the glory of the immortal God for the likeness of an image of mortal man or of birds or of four- legged animals or of snakes.” [1]cf. Rom 1:23 Nonetheless, God still poured out His kindness upon all men through divine providence—a signpost toward that mercy that would become incarnate. Thus, the Creator of the heavens and earth became a creature himself: Jesus Christ was born. He entered time from eternity to point the ancient longings and hunger of man toward “the way, the truth, and the life,” that is Himself.

Whoever loves me will keep my word, and my Father will love him, and we will come to him and make our dwelling with him. (Today’s Gospel)

Thus, in finding the One true God, pagan holidays were dropped in lieu of Christian feasts; Greek gods remained crumbling statues; and once barbaric nations became pacified by the Gospel of love. For Jesus did not come to judge or condemn the ancients, but to reveal that He was who they were looking for all along, and to give them the Spirit to lead them into all truth.

The Advocate, the Holy Spirit whom the Father will send in my name, he will teach you everything and remind you of all that I told you. (Gospel)

Please remember my ministry in your prayers,
as you are in mine.