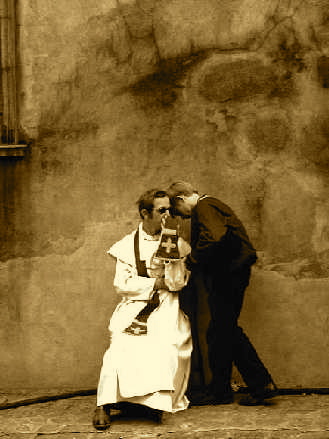 AFTER one of my concerts, the hosting priest invited me to the rectory for a late supper.

For dessert, he went on to boast how he hadn’t heard confessions in his parish for two years. “You see,” he grinned, “during the penitential prayers in Mass, the sinner is forgiven. As well, when one receives the Eucharist, his sins are removed.” I was in agreement. But then he said, “One only needs to come to confession when he has committed a mortal sin. I’ve had parishioners come to confession without mortal sin, and told them to go away. In fact, I really doubt any of my parishioners have really committed a mortal sin…”

This poor priest, unfortunately, underestimates both the power of the Sacrament, as well as the weakness of human nature. I will address the former.

Suffice it to say, the Sacrament of Reconciliation is not an invention of the Church, but the creation of Jesus Christ. Speaking only to the twelve apostles, Jesus said,

Peace be with you. As the Father has sent me so I send you.” And when he had said this, he breathed on them and said to them, “Receive the holy Spirit. Whose sins you forgive are forgiven them, and whose sins you retain are retained.

Jesus conferred His authority on the first bishops of the Church (and their successors) to forgive sins in His stead. James 5:16 commands us to do as much:

Therefore, confess your sins to one another…

Neither Jesus, nor James distinguishes between “mortal” or “venial” sin. Neither does the Apostle John,

If we confess our sins, he is faithful and just,and will forgive our sins and cleanse us from all unrighteousness. (1 Jn 1:9)

John says “all” unrighteousness. It would seem then that “all” sin should be confessed.

What this priest failed to recognize, it would seem, is that he is the representative of Christ, the one to whom sinners can look to as a sign of mercy and forgiveness. That he, in the person of Christ, becomes a conduit of grace. As such, every time someone comes to confession, they encounter sacrament—they encounter Jesus, reconciling us to the Father.

Jesus, who created us and knows us inside out, knew that we needed to audibly speak our sins. In fact, psychologists (not intending to imply belief in the Catholic Faith) have said that the Sacrament of Confession in the Catholic Church is one of the most healing things a human can partake of. That in their psychiatric offices, often this is all they try to do:  create an environment in which a person can unload their guilt (which is known to be a factor in poor mental and physical health.)

Criminologists have also asserted that crime investigators will work leads for years since it is a known fact that even the most cunning criminals eventually confess their crime to someone. It seems the human heart simply cannot bear the load of an evil conscience.

Jesus knew this, and so, has provided for us a means by which we can not only audibly confess these sins, but more importantly, audibly hear that we are forgiven. Whether it’s a transgression of impatience, or a matter of mortal sin, it doesn’t matter. The need is the same. Christ knew this.

Unfortunately, the priest did not.

Without being strictly necessary, confession of everyday faults (venial sins) is nevertheless strongly recommended by the Church. Indeed the regular confession of our venial sins helps us form our conscience, fight against evil tendencies, let ourselves be healed by Christ and progress in the life of the Spirit. By receiving more frequently through this sacrament the gift of the Father’s mercy, we are spurred to be merciful as he is merciful…

Individual, integral confession and absolution remain the only ordinary way for the faithful to reconcile themselves with God and the Church, unless physical or moral impossibility excuses from this kind of confession.” There are profound reasons for this. Christ is at work in each of the sacraments. He personally addresses every sinner: “My son, your sins are forgiven.” He is the physician tending each one of the sick who need him to cure them. He raises them up and reintegrates them into fraternal communion. Personal confession is thus the form most expressive of reconciliation with God and with the Church.  —Catechism of the Catholic Church, n. 1458, 1484,