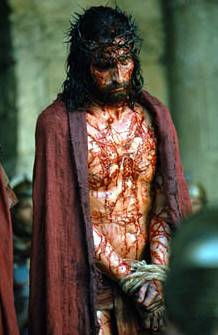 Scene from The Passion of the Christ

EVERY day as I comb the news headlines, I am faced with the violence and evil of this world. I find it exhausting, but also recognize it as my duty as a "watchman" to try and sift through this stuff to find the "word" hidden in the world’s events. But the other day, the face of evil really got to me when I entered the video store for the first time in months to rent a movie for my daughter’s birthday. As I scanned the shelves for a family movie, I was faced with image after image of dismembered bodies, half-naked women, demonic faces, and other violent images. I was looking into the mirror of a culture obsessed with sex and violence.

And yet, no one seems to openly object to this gruesome display which is scanned each day by young and old alike, and yet, when a picture of the reality of abortion is shown, some people are deeply offended. People pay to see violent movies, even rousing dramas such as Braveheart, Schindler’s List, or Saving Private Ryan where the reality of evil is graphically portrayed; or they play video games depicting unbelievable brutality and gruesome violence, and yet, somehow this is acceptable—but a photo giving voice to the voiceless is not.

I received a couple of letters from mothers who were upset at the image I used in the Hour of Decision. Understandably so. I’m a soon-to-be father of eight, and these images disturb me to the core. I wept when I saw them the first time. For some reason, some people think that I actually made this image… that I found two fetal arms and placed them intentionally on an American coin. I did not create this image, which came from the website www.abortionno.org and the Center for Bio-Ethical Reform. According to their website, ‘The coins and pencils are included as a size reference and are part of the original photos.’ While I did not readily read how the fetus was recovered, it is possible this baby was salvaged from a garbage dump or medical waste bin where many aborted babies often end up. The idea that this was an anti-American message, as two readers implied, is kind of befuddling, especially when it addresses Canadian bishops specifically, as well as references the warning I gave while in Canada’s capital.

It sometimes takes a while for me to pick an image for my writings, as they often convey a "word" in themselves.  My spirit was unsettled with using the typical quiet fetus sucking its thumb in the womb. For the message I sent yesterday is grave. It essentially warns that far more difficult and painful images of death will fill our cities and streets if abortion is not repented of. With such a powerful warning, is this the time for comfortable images? My newsman background in television has led me in the past to warn readers of graphic images in my meditations. Should I have made this a choice this time, as some have suggested?  Perhaps… but the baby in that image had no choice. That’s the point. Every day, some 126, 000 babies are aborted in the world. Over a hundred babies were aborted in the time it took you to read this far. I think it is time, in this age of images, internet, and media which inundates us, that we squarely face the painful reality of what abortion is in all its horror instead of trying to cover it up, keeping the truth in the darkness. For many people still believe that that fetus is just a blob, even at 10 weeks.

My people perish for lack of knowledge. (Hos 4:6)

THE MOST PAINFUL IMAGE

In nearly every traditional Catholic Church, there is a crucifix hanging in the center. Some of them depict a bloody lifeless corpse. Why? Why does the Catholic Church makes this the centerpiece of its churches? Because the image sends us a message. A message of truth, a message of love, a message of warning. It is a scandal. Man crucified his God. It is an image of the horror of the consequences of evil introduced into the world by sin.

When I watched the graphic movie The Passion of the Christ—its scenes flowing with the blood of our Lord—I was horrified… horrified at the cost of my sin. I wept, and wept, and wept. And that was the third time I saw it. When I prayed the Stations of the Cross at Hanceville, Alabama where Mother Angelica lives, and came upon the heavily mutilated body of Our Lord depicted on the Cross, it elicited the same powerful reaction. I was not angry at Mother Angelica. I was moved by the truth that I wasn’t doing enough for my Lord.

When I saw the photos of aborted babies on Pro-Life websites, I was sickened. It moved me to action. It convicted me that I needed to do and say more. For every day, there are babies being slaughtered just as the photo I published depicts. This is a scandal. It is an image of the horror of evil introduced into the modern world by sin. Is it right for us to try and hide the images of this holocaust, or the Jewish holocaust, or the images of starving babies in Ethiopia, another form of injustice?

One writer asked how I, with seven children, could possibly post an image like this. One of my daughters just walked into my office now and said, "If people never see this, they won’t ever fully grasp how terrible this is." Out of the mouths of babes.

There should be no false peace in your soul or mine so long as abortion exists. The photo I published brings the truth of abortion into the light.

And I would publish it again in a heartbeat.