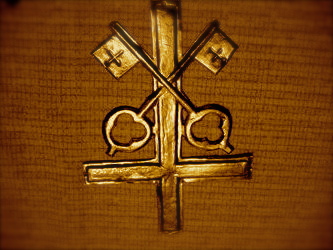 First published May28th, 2007, I have updated this writing, more relevant than ever…

IN a dream which increasingly mirrors our times, St. John Bosco saw the Church, represented by a great ship, which, directly before a period of peace, was under great attack:

The enemy ships attack with everything they’ve got: bombs, canons, firearms, and even books and pamphlets are hurled at the Pope’s ship.  —Forty Dreams of St. John Bosco, compiled and edited by Fr. J. Bacchiarello, S.D.B.

That is, the Church would be flooded with a deluge of false prophets.

The past three years, we have seen an explosion of voices attacking the Catholic Church in the name of “truth.”

The Da Vinci Code, authored by Dan Brown, is a book which suggests that Jesus may have survived the crucifixion, and had a child with Mary Magdalene.

The Lost Tomb of Jesus is a documentary produced by James Cameron (Titanic) which claims that the bones of Jesus and his family have been found in a tomb, thereby suggesting that Jesus never rose from the dead.

“The Gospel of Judas” discovered in 1978 was brought to the forefront by National Geographic Magazine, a “gospel” which one
scholar said would “turn everything on its head.” The ancient document alludes to the “Gnostic” heresy that we are saved by special knowledge, not faith in Christ.

Another form of Gnosticism is The Secret. This hugely popular film purports that the general population has been kept from a secret:  the “law of attraction”. It says that positive feelings and thoughts attract real events into one’s life; that one becomes his or her own savior through positive thinking.

Organized Atheism is gaining momentum in both Europe and North America, attacking religion as the cause of the world’s divisions and evils, rather than individuals.

Separation of Church and State is rapidly growing into simply silencing the Church. Recently, 18 American Congressman issued a communiqué demanding that the papacy back off from instructing Catholic politicians in their duty—a move, says The American Society for the Defense of Tradition, Family and Property, that could precipitate a schism.

Talk show hosts, comedians, and cartoons are now regularly not only criticizing the Church, but using terms and language which are vulgar and blasphemous. It’s as if there is suddenly “open season” on Catholicism.

Perhaps one of the most powerful propaganda films of our times, Brokeback Mountain has gone a long way in changing countless minds that the practice of homosexuality is not only acceptable, but to be celebrated.

There is a strong movement of sedevacanists surging in the world (they are those who believe the seat of Peter is vacant, and that since Vatican II, the reigning popes are “anti-popes.”) The arguments are clever but ultimately false, as the genuine mistakes made through erroneous applications of Vatican II are twisted to seem like present day Catholicism is actually a “false church.” Pope Benedict XVI is working assiduously to correct these errors while being attacked by the media for imposing his “world view”, and by certain quarters of the Church itself for “rewinding the clock.”

While concern for the planet is part of man’s vocation as steward of creation, I believe there is a strong “false prophet” within the environmental movement which seeks to frighten mankind through exaggeration, and to manipulate and control us through this fear. (See “Control! Control!“)

At the root of much of these and other attacks is an assault on the very divinity of Christ. This also is a sign of the times:

There will be false teachers among you, who will introduce destructive heresies and even deny the Master who ransomed them, bringing swift destruction on themselves. Many will follow their licentious ways, and because of them the way of truth will be reviled. (2 Pet 2:1-2)

St. Peter gives us a powerful picture of our day in which the truth perpetually proclaimed by the Magisterium of the Church is openly mocked and hated, just as Christ was slapped and spit upon by the Sanhedrin. This, before He was ultimately led into the streets to the chants of “Crucify him! Crucify him!” These false prophets are not only outside the Church; in fact, the most insidious danger is perhaps from within:

I know that after my departure savage wolves will come among you, and they will not spare the flock. And from your own group, men will come forward perverting the truth to draw the disciples away after them. So be vigilant… (Acts 20:29-31)

Jesus said we would recognize the false prophets within the Church by how they are received:

That is, such “false prophets” are those who do not want to “rock the boat,” who water down the Church’s teaching, or ignore it altogether as passé, irrelevant, or outdated. They often see the Liturgy and structure of the Church as oppressive, too pious, and undemocratic. They often replace the natural moral law with a shifting ethic of “tolerance.”

We may see that attacks against the Pope and the Church do not only come from outside; rather, the sufferings of the Church come from inside the Church, from the sin that exists in the Church. This was always common knowledge, but today we see it in truly terrifying form: the greatest persecution of the Church does not come from external enemies, but is born of sin within the Church. —POPE BENEDICT XVI, comments on flight to Lisbon, Portugal, May 12, 2010, LifeSiteNews

The increasing number and influence of false prophets in our day is not only a precursor to what will become, I believe, an open and “official” persecution of true Christians, but may be the harbinger of the coming False Prophet (Rev 13:11-14; 19:20): an individual whose appearance coincides with that of the “Antichrist” or the “Lawless One” (1 John 2:18; 2 Thess 2:3). Just as the growing lawlessness of our times may culminate in the appearance of the Lawless One, so too the sudden proliferation of false prophets may climax in the appearance of the False Prophet. (Note: Some theologians equate the “second beast” of Revelation, the “False Prophet”, to the person of Antichrist, while others point to the “first beast” (Rev 13:1-2). I wish to avoid speculation on this point. The importance of this message is to recognize the signs of times as Christ urges us to do [Luke 12:54-56].)

According to the Early Church Fathers and Sacred Scripture, this manifestation of an individual Antichrist will come before the Era of Peace, but after a great rebellion or apostasy:

For that day [of the coming of our Lord Jesus] will not come, unless the rebellion comes first, and the man of lawlessness is revealed… (2 Thess 2:3)

When all this is considered there is good reason to fear… that there may be already in the world the “Son of Perdition” of whom the Apostle speaks.  —POPE ST. PIUS X, Encylical, E Supremi, n.5

The days are coming and are already here when the darkness of confusion will become so thick, that only the supernatural grace of God will be able to carry souls through these times. Well-meaning Catholics will be calling one another heretics. False prophets will claim to have the truth. The din of voices will be overwhelming.

This is how you can know the Spirit of God: every spirit that acknowledges Jesus Christ come in the flesh belongs to God…

One who denies Christ’s incarnation in the flesh does “not belong to God,” but to the spirit of antichrist.

…and every spirit that does not acknowledge Jesus does not belong to God. (1 John 4:1-3)

The one who denies Christ’s divinity (and all that implies) is also a false prophet.

They belong to the world; accordingly, their teaching belongs to the world, and the world listens to them. (v. 5)

The message of the false prophet will be lapped up by the world. In many of the examples above, the world has quickly fallen into these seductive traps, drawing hundreds of millions away from the Truth. On the other hand, the genuine message of the Gospel is accepted by fewer souls because it requires repentance from sin and faith in God’s plan of salvation, and is therefore rejected by the majority.

The fourth test given by St. John is fidelity to the Magisterium of the Church:

They went out from us, but they were not really of our number; if they had been, they would have remained with us. Their desertion shows that none of them was of our number. (1 John 2:19)

Anyone who teaches a Gospel different than the one handed onto us down through the centuries in the unbroken chain of Apostolic Succession, is also working, if even unknowingly, through a spirit of deception. This does not mean that someone who is ignorant of the truth is guilty of apostasy; but it means that those who knowingly refuse to accept what Christ Himself has built upon Peter, the rock, place their souls—and the sheep they lead—in grave danger.

We must hear again what Jesus said to the first Bishops of the Church:

This final test is that he who persists in sin, calling evil, good and good, evil, is not of God. These kinds of false prophets are to be found everywhere in our modern age…

Jesus gives us a very simple solution to navigating through the confusions and delusions spread by the false prophets of our day:  be little like a child. One who is humble is obedient to the teachings of the Church, even though he may not fully comprehend them; he is submissive to the Commandments even though his flesh pulls at him to do otherwise; and he trusts in the Lord and in His Cross to save him—a notion which is “foolishness” to the world. He keeps his eyes on the Lord, simply doing the duty of the moment, abandoning himself to God in good times and bad. The five tests above are possible for him, because he trusts in the Bo dy of Christ, which is the Church, to help him discern. And the more he opens his heart to grace as he lives in child-like submission to divine authority, the easier total faithfulness becomes.

One of the promises of the Virgin Mary to those who faithfully pray the Rosary is that she will protect them from heresy, which is why lately I have been so vigorously promoting this prayer. Yes, to pray these beads each day may sometimes feel dry, pointless, and a burden. But it is the child-like heart which trusts, despite his feelings, that God has chosen this particular prayer as a means of grace and protection for our day…

…and protection from the false prophets.

John portrays the ‘beast rising out of the sea,’ out of the dark depths of evil, with the symbols of Roman imperial power, and he thus puts a very concrete face on the threat facing the Christians of his day: the total claim placed upon man by the emperor cult and the resulting elevation of political-military-economic might to the peak of absolute power—to the personification of the evil that threatens to devour us. —POPE BENEDICT XVI, Jesus of Nazareth; 2007

A powerful vision of truth being extinguished: The Smoldering Candle

A personal experience… and the growing lawlessness:  The Restrainer

Wars and Rumors of Wars… ending war in our families and nations.