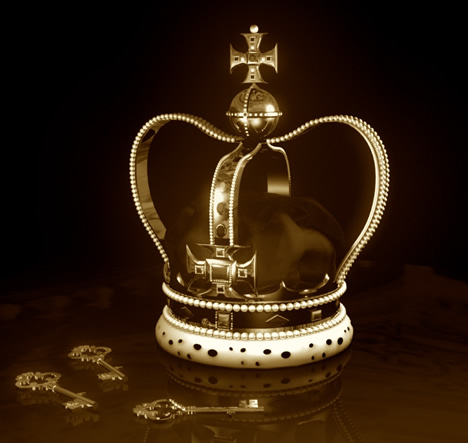 THERE is confusion, even among Catholics, as to the nature of the Church Christ established. Some feel the Church needs to be reformed, to allow a more democratic approach to her doctrines and to deciding how to deal with present day moral issues.

However, they fail to see that Jesus did not establish a democracy, but a dynasty.

The Lord promised to David,

Of this I am sure, that your love lasts for ever, that your truth is firmly established as the heavens. “With my chosen one, I have made a covenant; I have sworn to David my servant: I will establish your dynasty for ever and set up your throne through all ages.” (Psalm 89:3-5)

David died, but his throne did not. Jesus is his descendant (Matt 1:1; Lk 1:32) and the first words of His preaching ministry announced this kingdom:

This is the time of fulfillment. The kingdom of God is at hand. (Mark 1:15)

The kingdom is definitively established in Christ through the shedding of His blood. It is a spiritual kingdom, a dynasty that will endure “through all ages.” The Church, His body, is the embodiment of this kingdom:

Christ, high priest and unique mediator, has made of the Church “a kingdom, priests for his God and Father…” The faithful exercise their baptismal priesthood through their participation, each according to his own vocation, in Christ’s mission as priest, prophet, and king. —Catechism of the Catholic Church, n. 1546

David was king, but in Isaiah 22, we see that he invests another man with his own authority—one who would become the steward, master, or prime minister, one could say, of David’s own house:

On that day I will summon my servant Eliakim, son of Hilkiah; I will clothe him with your robe, and gird him with your sash, and give over to him your authority. He shall be a father to the inhabitants of Jerusalem, and to the house of Judah; I will place the key of the House of David on his shoulder; when he opens, no one shall shut, when he shuts, no one shall open. I will fix him like a peg in a sure spot, to be a place of honor for his family… (Isaiah 22:20-23)

It is unmistakable, then, that Jesus is referring to this passage when He turns to Peter, echoing Isaiah’s very words:

I say to you, you are Peter, and upon this rock I will build my church, and the gates of the netherworld shall not prevail against it. I will give you the keys to the kingdom of heaven. Whatever you bind on earth shall be bound in heaven; and whatever you loose on earth shall be loosed in heaven. (Matt 16:18-19)

Jesus came not to abolish the Old Testament, but to fulfill it (Matt 5:17). Thus, He hands the keys of His kingdom to Peter to be its steward:

That is, Peter now occupies a role as substitute for the king over his household. That’s why we call the Holy Father the “Vicar of Christ.” Vicar comes from the Latin vicarius which means ‘substitute’. Moreover, see how Isaiah’s words are fulfilled in the ecclesiastical garments worn throughout the centuries: “I will clothe him with your robe, and gird him with your sash...” In fact, Isaiah says that this vicar of David will be called a “father” over the inhabitants of Jerusalem. The word “pope” comes from the Greek pappas which means ‘father.’ The Pope then is a father over the “new Jerusalem”, which is already present in the hearts of the faithful who form “the city of God.” And just as Isaiah prophesies that Eliakim will be “like a peg in a sure spot, to be a place of honor for his family,” so too the Pope is a “rock,” and remains to this day loved and honored by the faithful throughout the world.

Who can fail to see that Christ has established His dynasty in the Church, with the Holy Father as her steward?

The implications for this are enormous. That is, Eliakim was not king; he was steward. He was charged with carrying out the king’s will regarding the kingdom, not creating his own order. The Holy Father is no different:

Thus, the Holy Father and the bishops in communion with him, as well as the lay faithful, share in the “kingly” role of Christ by preaching the truth which sets us free. But this truth is not something we make up. It is not something we manufacture throughout the centuries, as critics of the Church continue to claim. The truth we pass on—and the truths we speak today to address the new moral challenges of our times—are derived from the immutable word of God and the natural and moral law, what we call the “deposit of faith.” The faith and morals of the Church, then, are not up for grabs; they are not subject to a democratic process whereby they are fashioned according to the whims of a particular generation, or rejected altogether. No man—the pope included—has the authority to override the King’s will. Rather, “truth is firmly established as the heavens“. That truth is guarded by a “dynasty… through the ages.”

Despite the sexual scandals that continue to shake up the Church, the truth of Christ’s words are no less powerful: “…the gates of hell will not prevail against it.” We must resist the temptation to throw the baby out with the bath water; to see the corruption of a few members of the body as a corruption of the whole; to lose our faith in Christ and His ability to govern. Those with eyes can see what is happening today: that which is corrupt is being shaken to the foundations. In the end, that which is left standing may look a lot different. The Church will be smaller; she will be humbler; she will purer.

But make no mistake: she will also be governed by a Vicar. For the dynasty will last until the end of time… and the truth she teaches will always set us free.

…with regard to divine scripture… no man, relying on his own wisdom, is able to claim the privilege of rashly twisting the scriptures to his own meaning in opposition to the meaning which holy mother Church holds and has held. It was the Church alone that Christ commissioned to guard the deposit of the faith and to decide the true meaning and interpretation of the divine pronouncements. —POPE PIUS IX, Nostis et Nobiscum, Encyclical, n. 14 DECEMBER 8, 1849