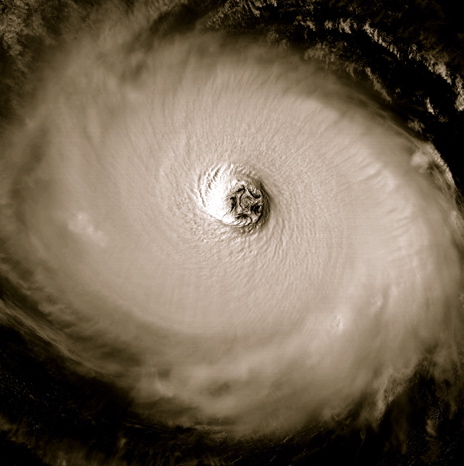 I believe at the height of the coming storm—a time of great chaos and confusion—the eye [of the hurricane] will pass over humanity. Suddenly, there will be a great calm; the sky will open up, and we will see the Sun beaming down upon us. It’s rays of Mercy will illuminate our hearts, and we will all see ourselves the way God sees us. It will be a warning, as we will see our souls in their true condition. It will be more than a “wake-up call”.  —Trumpets of Warning, Part V

After that was written, another word followed some time later, a “picture” of that day:

The Day of Silence.

I believe there may be coming a time on earth—a moment of Mercy—when God is going to manifest Himself in a way in which the entire world will have an opportunity to recognize who their Creator is. All things will stand still. Traffic will cease. The buzzing of machines will stop. The din of conversation will halt.

Perhaps Jesus spoke to St. Faustina of such a day:

Before I come as the just Judge, I am coming first as the King of Mercy. Before the day of justice arrives, there will be given to people a sign in the heavens of this sort:

All light in the heavens will be extinguished, and there will be great darkness over the whole earth. Then the sign of the cross will be seen in the sky, and from the openings where the hands and the feet of the Savior were nailed will come forth great lights which will light up the earth for a period of time. This will take place shortly before the last day.  —Diary of Divine Mercy, n. 83

In contemporary mysticism, such an event has been called “the illumination,” and has been prophesied by several holy men and women. It is a “warning” to put oneself right with God before the coming purification of the world.

Suddenly I saw the complete condition of my soul as God sees it. I could clearly see all that is displeasing to God. I did not know that even the smallest transgressions will have to be accounted for. What a moment! Who can describe it? To stand before the Thrice-Holy-God!—St. Faustina; Divine Mercy in My Soul, Diary

I pronounced a great day… wherein the terrible Judge should reveal all men’s consciences and try every man of each kind of religion. This is the day of change, this is the Great Day which I threatened, comfortable to the well-being, and terrible to all heretics.  —St. Edmund Campion, Cobett’s Complete Collection of State Trials…, Vol. I,  p. 1063.

Blessed Anna Maria Taigi (1769-1837), known for her astoundingly accurate visions, also spoke of such an event.

She indicated that this illumination of conscience would result in the saving of many souls because many would repent as a result of this”warning”… this miracle of “self-illumination.” —Fr. Joseph Iannuzzi in Antichrist and the End Times, P. 36

The consciences of this beloved people must be violently shaken so that they may “put their house in order”… A great moment is approaching, a great day of light… it is the hour of decision for mankind. —Ibid, P. 37 (Volumne 15-n.2, Featured Article from www.sign.org)

It will be the hour of decision when each soul must choose whether to accept Jesus Christ as the Lord of all and Savior of sinful mankind… or to continue down the path of self-fulfillment and individualism that the world has embarked upon—a path which is bringing civilization to the brink of anarchy. This moment of Mercy will shine upon the ramp of the Ark (see Understanding the Urgency of Our Times) before its door is sealed and the eye of the storm moves on.

Such a moment of grace like this occurred in the New Testament… in the midst of a persecution.

As [Paul] was nearing Damascus, a light from the sky suddenly flashed around him. He fell to the ground and heard a voice saying to him, “Saul, Saul, why are you persecuting me?” He said, “Who are you, sir?” The reply came, “I am Jesus, whom you are persecuting”… things like scales fell from his eyes and he regained his sight. He got up and was baptized, and when he had eaten, he recovered his strength. (Acts 9:3-5, 19 )

Here is a picture of what may occur for many souls: illumination, followed by faith in Christ, baptism into or return to His Church, and reception of the Eucharist which “recovers strength.” What a triumph of Mercy it would be if the very persecutors of the Church were to be confounded by Love!

But each soul must choose to enter the Ark before the door closes… and the storm resumes. For then will follow the purification of all wickedness from the earth, ushering in a period of peace which the Apostle John and the Apostolic Fathers called, symbolically, “a thousand year” reign.

A reader just sent me a letter regarding an experience he recently had:

I was walking my sister’s dog at night; it was well into night, when all of a sudden it went to daylight. Just like that. The thing is, it was frightening. Then it went back to night. My knees were wobbly after. I was standing there, like “what the heck was that?” A car drove by just then, and I looked at the driver as if to say, “you saw that?” I almost expected the driver to stop and ask the same thing. But no, she just kept driving by. The light came and went like an instant, but in that instant it seemed prolonged. It was like “a great lid” on the world was being ripped open.

And if I was to put into words what I was feeling when it happened, as it happened, it would be something like this: “Here it is, here it comes, this is the truth…”

If God is going to purify the earth, as both Scripture and Tradition attest, then such a merciful event has a convincing context: it will indeed be “the last hope of salvation.“

Just as one can see the eye of a hurricane approaching from a distance, so too we may be seeing signs of this coming event. Priests have recently told me how all of a sudden people who have been away from the Church for 20-30 years are coming to Confession; many Christians have been awakened, as if from a deep sleep, to the need to simplify their lives and get their “houses in order”; and the sense of urgency and “something” impending is in the hearts of many more.

It is necessary for us to “watch and pray.” Indeed, it seems we may be in the first part of that storm Jesus called the labor pains (Luke 21:10-11; Matt 24:8), which appear to becoming stronger and closer together (we continue to see extraordinary events, such as the annihilation of entire towns and villages, as happened recently in Greensburg, Kansas).

The winds of change are blowing.

We must be ready. Some mystics have hinted that, while this illumination is spiritual in nature, souls who are in a state of mortal sin could “die from shock.”  There is no worse shock than that of facing one’s holy Creator unprepared, a possibility for anyone of us at anytime.

May we “repent and believe the good news!”  Every day is a new day to begin again.

The elect souls will have to fight the Prince of Darkness. It will be a frightening storm — no, not a storm, but a hurricane devastating everything! He even wants to destroy the faith and confidence of the elect. I will always be beside you in the storm that is now brewing. I am your mother. I can help you and I want to! You will see everywhere the light of my Flame of Love sprouting out like a flash of lightning illuminating Heaven and earth, and with which I will inflame even the dark and languid souls! But what sorrow it is for me to have to watch so many of my children throw themselves in hell! —Message from Blessed Virgin Mary to Elizabeth Kindelmann (1913-1985); approved by Cardinal Péter Erdö, primate of Hungary