THE NOW WORD ON MASS READINGS
for April 4th, 2014
Friday of the Fourth Week of Lent 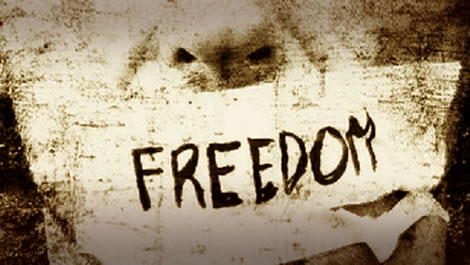 THE truth is, friends, the world is rapidly closing in from all sides on Christians for holding fast to the truth. In Middle Eastern countries, our brothers and sisters are being tortured, [1]cf. endoftheamericandream.com beheaded, [2]cf. IndianDefence.com and burned out of their homes and churches. [3]cf. Persecution.org And in the West, freedom of speech is disappearing in real time before our very eyes. Cardinal Timothy Dolan is not far off in his prediction of three years ago. [4]Read also what I wrote in 2005, which is now coming to pass: Persecution!… and the Moral Tsunami

…we do worry indeed about this freedom of religion. Editorials already call for the removal of guarantees of religious liberty, with crusaders calling for people of faith to be coerced to acceptance of this redefinition [of marriage]. If the experience of those few other states and countries where this is already law is any indication, the churches, and believers, will soon be harassed, threatened, and hauled into court for their conviction that marriage is between one man, one woman, forever, bringing children into the world.—from Archbishop (Cardinal) Timothy Dolan’s blog, “Some Afterthoughts”, July 7th, 2011; http://blog.archny.org/?p=1349

In today’s Gospel, the authorities attempt to arrest Jesus for merely speaking the truth that they found disagreeable. But He reminds the Apostles, “If they persecuted me, they will also persecute you.” [5]cf. Jn 15:20 Today’s first reading, then, is fast becoming a parable for the Church today…

The wicked said among themselves, thinking not aright: “Let us beset the just one, because he is obnoxious to us; he sets himself against our doings, reproaches us for transgressions of the law and charges us with violations of our training. He professes to have knowledge of God and styles himself a child of the LORD. To us he is the censure of our thoughts; merely to see him is a hardship for us, because his life is not like that of others, and different are his ways. He judges us debased; he holds aloof from our paths as from things impure. He calls blest the destiny of the just and boasts that God is his Father…

But today’s Psalm adds the reassurance:

The LORD is close to the brokenhearted; and those who are crushed in spirit he saves. Many are the troubles of the just man, but out of them all the LORD delivers him.

Blessed are they who are persecuted for the sake of righteousness, for theirs is the kingdom of heaven, Jesus said. Blessed are you when they insult you and persecute you and utter every kind of evil against you falsely because of me. [6]cf. Matt 5:10-11

Brothers and sisters, the answer to those who wish to destroy our freedoms or paint us as intolerant bigots is the same answer that Jesus eventually gave to those who arrested Him: Father, forgive them, for they know not what they are doing. [7]cf. Lk 23:34

Let love burn in your heart for those who insult and hate you so that this love, in turn, may sear their hearts with the presence of God: “if your enemy is hungry, feed him; if he is thirsty, give him something to drink; for by so doing you will heap burning coals upon his head.” [8]cf. Rom 12:20

The LORD redeems the lives of his servants; no one incurs guilt who takes refuge in him. (Today’s Psalm)