THE NOW WORD ON MASS READINGS
for April 3rd, 2014
Thursday of the Fourth Week of Lent 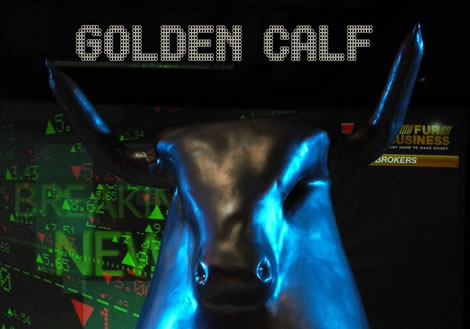 WE are are at the end of an era, and the beginning of the next: The Age of the Spirit. But before the next begins, the grain of wheat—this culture—must fall into the ground and die. For the moral foundations in science, politics, and economics have mostly rotted. Our science is now frequently used to experiment on humans, our politics to manipulate them, and economics to enslave them.

Pope Francis noted the ‘epochal change’ we are going through in a cursory glance:

…the majority of our contemporaries are barely living from day to day, with dire consequences. A number of diseases are spreading. The hearts of many people are gripped by fear and desperation, even in the so-called rich countries. The joy of living frequently fades, lack of respect for others and violence are on the rise, and inequality is increasingly evident. It is a struggle to live and, often, to live with precious little dignity. —POPE FRANCIS, Evangelii Gaudium, n. 52

Why? Why, after the so-called “Enlightenment” period, the spread of democracy, the advance in technology, the expanse of global communications, the headway in medicine… why does humanity find itself teetering on the brink of a third World War, of mass famines, of an expanding gap between rich and poor, and rampant disease?

It is because we are no different than the Israelites of old. They forgot the most basic of questions: the reason for their existence, and more so, who brought them into existence. And so they turned into themselves to look to the temporal for satisfaction, to the elements for pleasure, to their gold for something to worship.

They exchanged their glory for the image of a grass-eating bullock. (Today’s Psalm)

Modern man is no different. We have exchanged our glory, which is the dignity of being sons and daughters of God, for fleeting pleasures, the “golden calf” of the moment. Like the Israelites who forgot the miracles God wrought to deliver them from Egypt, we too have forgotten the incredible miracles God has done over two millennia. We have forgotten how Western civilization was built, upon the very commandments and principles of Christianity. Thus, Jesus says to us:

…you have never heard [the Father’s] voice nor seen his form, and you do not have his word remaining in you, because you do not believe in the one whom he has sent. (Today’s Gospel)

We do not believe because we do not face the most fundamental of questions:

Who am I? Where have I come from and where am I going? Why is there evil? What is there after this life? … They are questions which have their common source in the quest for meaning which has always compelled the human heart. In fact, the answer given to these questions decides the direction which people seek to give to their lives. —BLESSED JOHN PAUL II, Fides et Ratio, n. 1

The direction of this generation toward self-destruction [1]cf. The Judas Prophecy is not going to change—not because we don’t have answers—but because we refuse to even ask the questions! The terrible cyclone of busyness, noise, consumerism, sensuality and death, as the most convenient solution to our problems, has drowned out the questions to such a degree that we cannot even hear the foundations crumbling beneath us!

What you and I can do is personally answer the questions. And to answer them is to get our priorities right again. It is to repent. It is to “come out of Babylon” and begin to live with one foot in the next world. It is to become disciples of Jesus who listen to His voice, who follow Him, even at the cost of our lives. In this way, we may not be able to save the culture, but we will become a sign to others—an answer to others—who, as our civilization enters into the last stages of twilight, will begin to look for a “burning and shining lamp” in the sudden darkness in which they will find themselves.

Yes, Christ is calling you and I to become that light, pointing toward a new Dawn. But we must make sure that our light will be seen, not smothered beneath the coming collapse of Babylon.

Depart from her, my people, so as not to take part in her sins and receive a share in her plagues, for her sins are piled up to the sky, and God remembers her crimes… (Rev 18: 4-5)