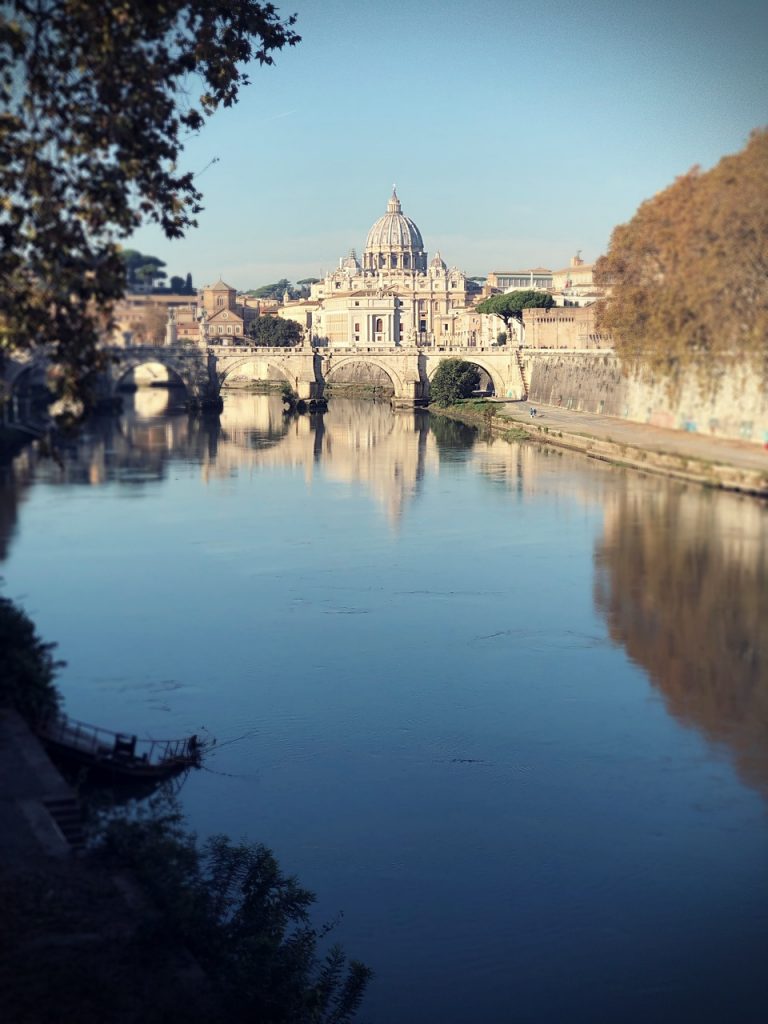 The Vatican across the Tiber

A significant element of the ecumenical conference here was the tours we took as a group throughout Rome. It became immediately apparent in the buildings, architecture and sacred art that the roots of Christianity cannot be separated from the Catholic Church. From St. Paul’s journey here to the early martyrs to the likes of St. Jerome, the great translator of the Scriptures who was summoned to the Church of St. Laurence by Pope Damasus… the budding of the early Church clearly sprung from the tree of Catholicism. The idea that the Catholic Faith was invented centuries later is as fictitious as the Easter Bunny. 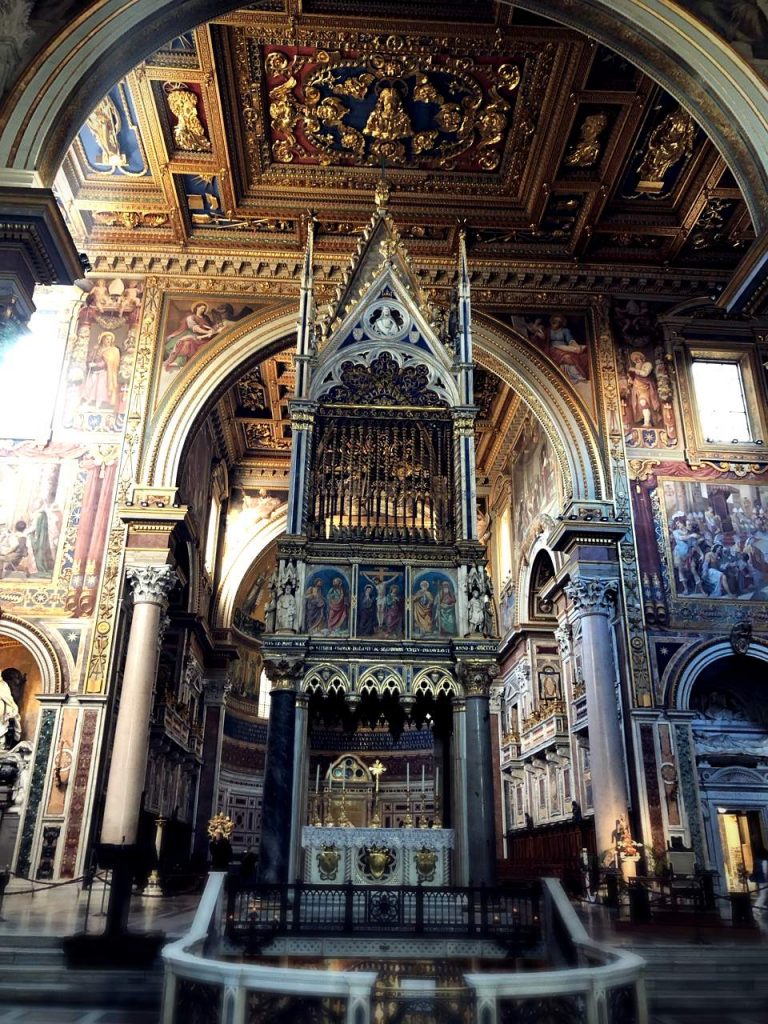 I enjoyed many conversations with the president of an American Protestant university. He is a brilliant, perceptive, and faithful soul. He was taken aback by the typology seen in the art that adorned the earliest cathedrals in Rome and how sacred works interpreted the Bible—even before it was collected in its present form. For it was in these paintings and stained glass windows that the laity was taught at a time when the Scriptures were scarce, unlike today. Moreover, as I and others there explained our Faith to him, he was amazed at how “biblical” we Catholics are. “Everything you are saying is saturated with the Scriptures,” he marvelled. “Sadly,” he pined, “Evangelicals are less and less biblical today.”

I was struck by how many souls I passed who seemed joyless and tired, almost trapped in their daily routines. I also realized again how powerful a smile can be. It is the little ways that we love others, right where they’re at, that tills their hearts and prepares them for the seeds of the Gospel (whether it is we or another we plants them).

The Pope gave a meditation at the Angelus on Sunday in St. Peter’s Square. It was in Italian, so I couldn’t understand it. But it didn’t matter. There was something else being said, without words…. Shortly before noon, the square began to fill with thousands of people from every corner of the world. The universal, that is, “catholic” Church was gathering. While Pope Francis was speaking from his window, I was struck 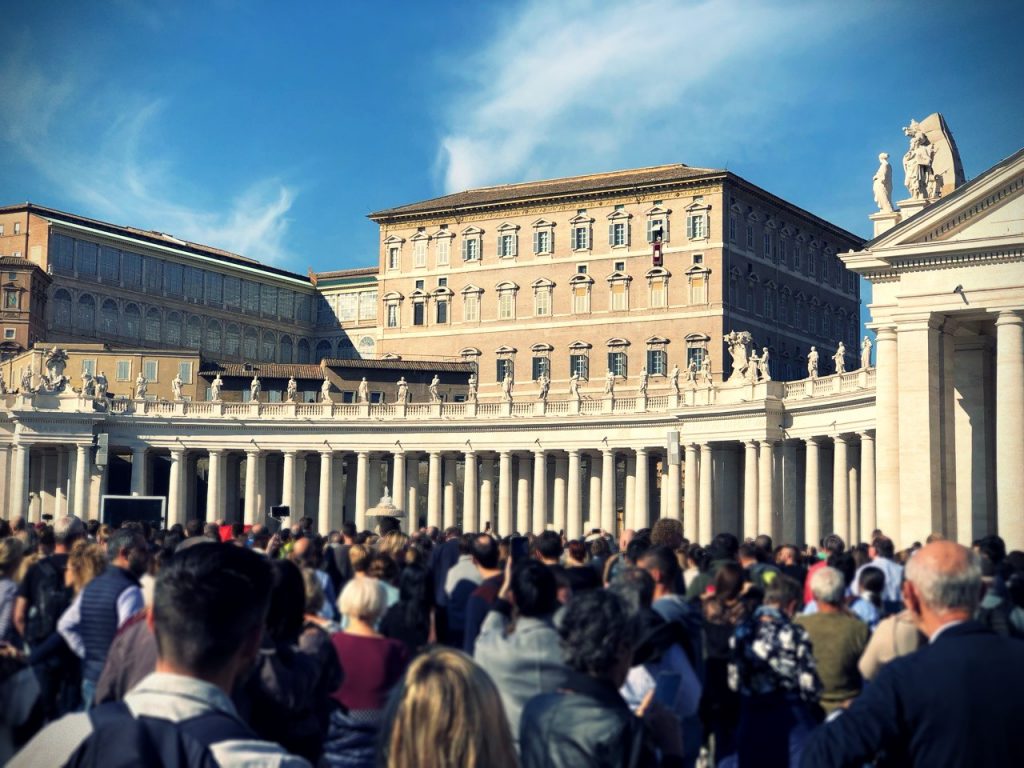 with the sense of a hungry flock gathered to feed at the feet of the Good Shepherd, Jesus Christ, through His representative on earth:

Simon, Simon, behold, Satan has demanded to sift all of you like wheat, but I have prayed that your own faith may not fail; and once you have turned back, you must strengthen your brothers. (Luke 22:31-32)

There was a tremendous sense of peace and God’s presence that overflowed into tears. I hadn’t felt that in Rome since I was there several years earlier at the tomb of St. John Paul II. Yes, despite the failings of the sheep and the faults of the shepherds, Jesus still feeds, tends, and loves His lambs. At least, those who will let Him.

Back in my hotel room that evening, I took my perch again on the “watchman’s wall” and scanned the headlines and read some email. “The pope is at it again,” moaned one reader. “The pope is a moron,” stated another. “If that bothers you,” he said, “so be it.” I replied, “It bothers the Lord.”

But yes, it bothers me too. Sure, the Pope has left nearly all of us, me included, scratching our heads at times wondering why he does this or that, or why some things are left unsaid while other things probably shouldn’t have been (the fact remains that very few if any of us knows all the facts or the motives of his heart). But this does not, ever, give Catholics the right to speak of their shepherds in such derogatory terms.

There is a revolutionary spirit rising within the Church that is dangerous, if not more dangerous than the present confusion. It wears the mask of orthodoxy but is laden with subtle pride and self-righteousness, often devoid of the humility and charity that was a trademark of the Saints who at times faced far more corrupt bishops and popes 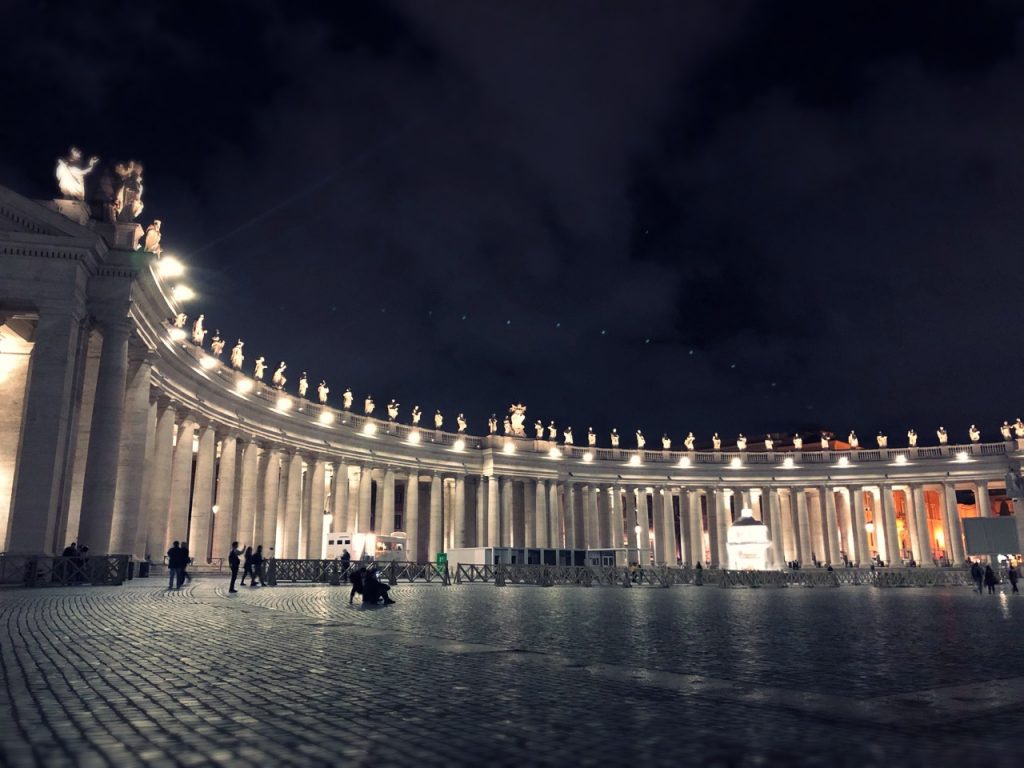 than we have ever seen. Yes, all of us should be deeply grieved by the clericalism and sexual scandals that have undermined not only the priesthood but the entire Church. But our response in the Body of Christ and our language ought to be markedly different than the kind of mentality we see regularly on social media and television; we ought to stand out like stars in a night sky where rudeness, division, and ad hominem attacks are now the norm.

So yes, it does bother me because it strikes at the very unity of the Church and counters the witness she ought to give, most especially to her enemies.

The anger and frustration rising are understandable. The status quo is no longer acceptable, and the Lord is making sure of that. But our anger must also be measured. It must also be tempered by the virtues. It must always be drawn back into the mercy that Christ has shown to all of us who are sinners. Rather than grabbing pitch-forks and torches, Our Lady continually exhorts us to grab our rosaries and, to ourselves, become a flame of love in order to dispel the night of sin. Take for instance this alleged message recently from Our Lady of Zaro:

Dearly beloved children, once again I come to you to ask you for prayer, prayer for my beloved Church, prayer for my favored sons who so many times alienate others from the truth and from the true magisterium of the Church with their behavior. My children, judgment belongs to God alone, but I understand full well, as a mother, that on seeing such behavior you feel lost and lose the right way. I ask you to listen to me: pray for them and do not judge, pray for their fragility and for all that makes you suffer, pray that they would find their way back and make the face of my Jesus shine again on their faces. My children, also pray much for your local church, pray for your Bishop and your pastors, pray and be silent. Bend your knees and listen to the voice of God. Leave judgment to others: do not take on tasks that are not yours. —to Angela, November 8th, 2018

Yes, this echoes what Our Lady of Medjugorje allegedly said recently: Pray more… speak less. Jesus will judge us as much for what we say as what our bishop’s fail to…

The Church is passing through the Storm that I have been warning readers about for over a decade. As beautiful as Rome is, God will take away our splendid buildings and sacred treasures if that’s what it takes to purify His Bride. Indeed, one of the lovely churches we visited was once desecrated by Napoleon who turned it into a stable for his army’s horses. Other churches still bear the scars of the French Revolution.

We are there again, on the threshold, this time, of a Global Revolution.

But the remedy is the same: remain in a state of grace; stay rooted in daily prayer; have 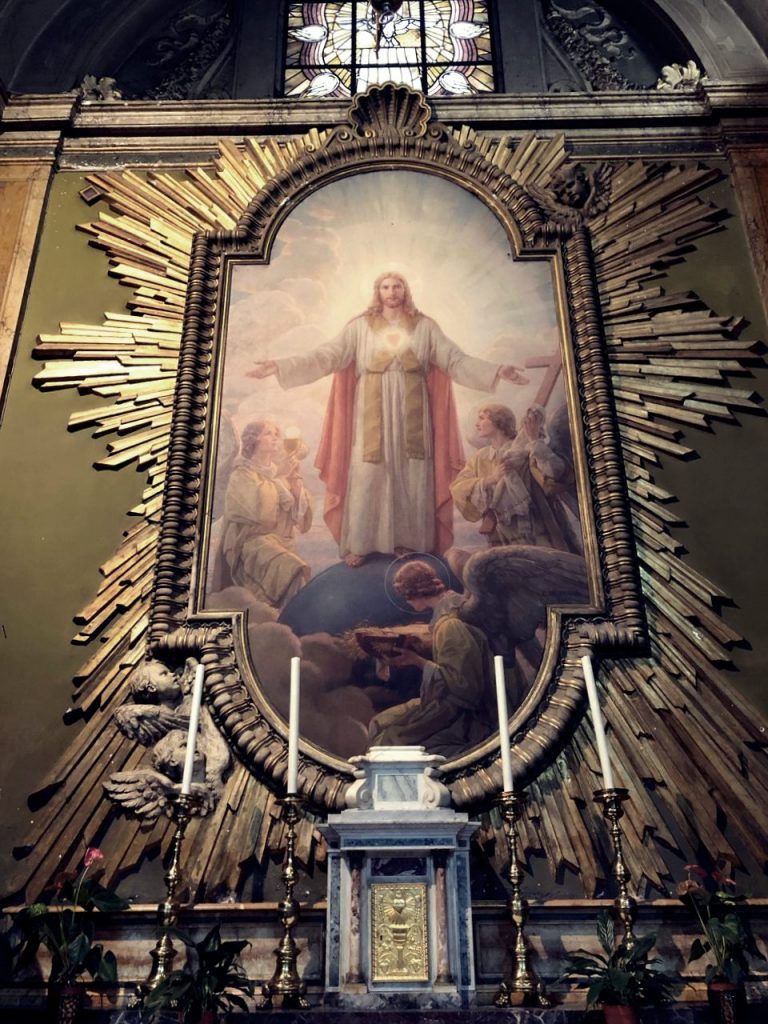 frequent recourse to Jesus in the Eucharist and His mercy in Confession; hold fast to the truth that has been taught for 2000 years; remain on the rock of Peter, despite any faults of the man who holds that office; stay close to the Blessed Mother, the “ark” given to us in these times; and last, simply, love one another—including your bishop.

As it was in the days of Noah, so it will be in the days of the Son of Man; they were eating and drinking, marrying and giving in marriage up to the day that Noah entered the ark, and the flood came and destroyed them all. (Today’s Gospel) 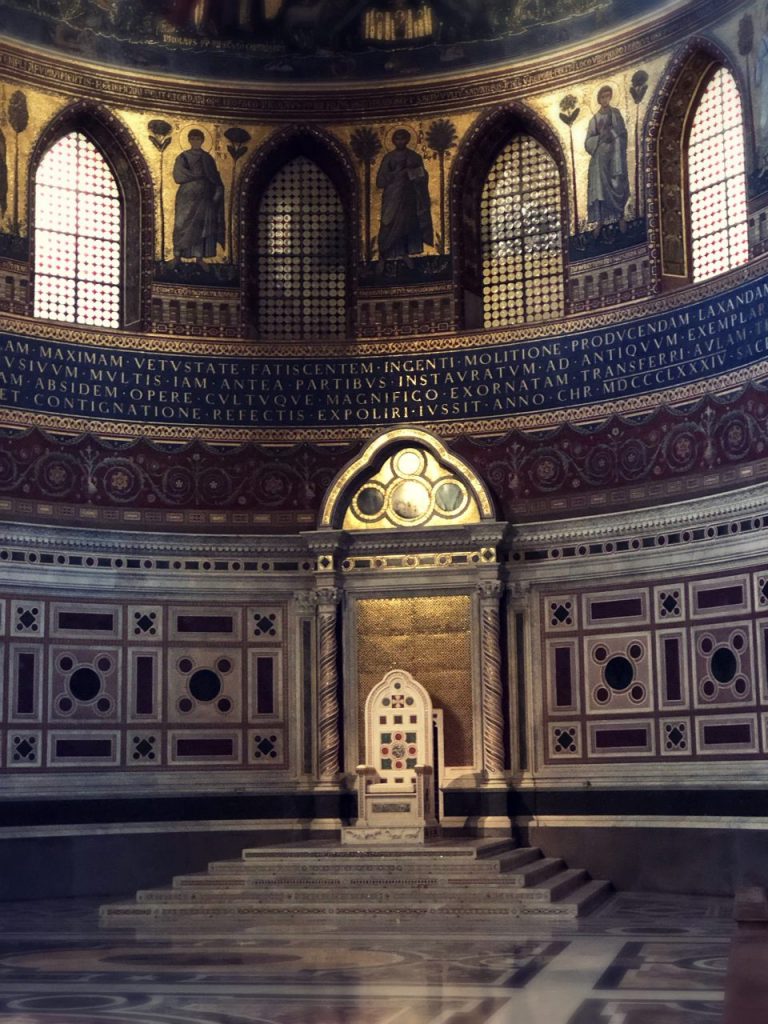