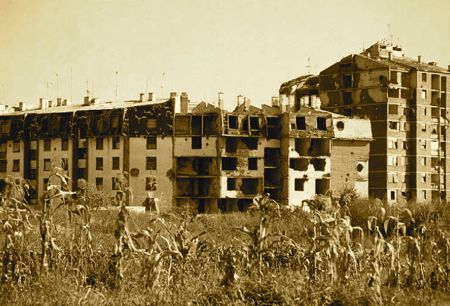 WHEN I visited former Yugoslavia just over a year ago, I was taken to a little make-shift village where war refugees were living. They came there by rail-car, fleeing the devastating bombs and bullets which still mark many of the apartments and businesses of Bosnia’s cities and towns.

Even though the war has been over for several years, these refugees are still living in these little shacks, put together with various board and metal scraps, and capped with dangerous asbestos roofs… which children freely play around. For doors and window coverings, many families have only curtains—not much protection against a cold winter day.

Without social assistance, these families—about 20 of them now—are doing what they can to survive. And a little nun from England is doing what she can to help. Sr. Josephine Walsh started a project called "Housing Aid Bosnia." With the donations she’s receiving, she’s building homes, one at time, for these destitute families.

When I was there, I put on an impromptu concert for the village. I had a chance to share, especially with the teenagers, the Gospel message. I told them that, though they were poor, North American kids were often much poorer because they have everything, except what really matters: Jesus. When it was time to leave, the village gathered round, and I promised I would tell my readers about their dire situation.

I recently found the contact information for Sr. Josephine which I had misplaced. I phoned her in January, and she said the need there is more desperate than ever.

Pray about it. If you can give, here is the address below to which you can mail a donation (in US or Canadian currency; personal cheques are accepted). Also… is there anyone out there able to take this project under their wing? A businessman, or philanthropist?

God bless you, and thank you for letting me ask this of you. I won’t do this often here (other than begging every blue moon for my own ministry’s needs):

(This is a registered charity)