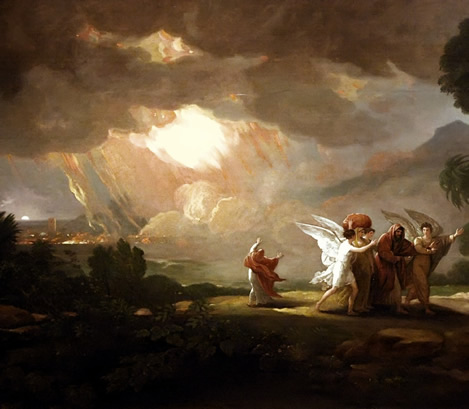 THE waves of confusion, calamity, and uncertainty are pounding upon the doors of every nation on earth. As food and fuel prices soar and the world economy sinks like an anchor to the seabed, there is much talk of refuges—safe-havens to weather the approaching Storm. But there is a danger facing some Christians today, and that is to fall into a self-preservationist spirit that is becoming more prevalent. Survivalist websites, ads for emergency kits, power generators, food cookers, and gold and silver offerings… the fear and paranoia today is palpable as insecurity mushrooms. But God is calling His people to a different spirit than that of the world. A spirit of absolute trust.

Jesus cues His listeners as to what the world would be like when chastisements would inevitably come:  [1]see The Last Judgment

In June of 1988, Cardinal Ratzinger (Pope Benedict XVI) approved as “reliable and worthy of belief” a message from the Blessed Mother conveyed to Sr. Agnes Sasagawa of Japan. Echoing Christ’s warning, the message said:

…if men do not repent and better themselves, the Father will inflict a terrible punishment on all humanity. It will be a punishment greater than the deluge, such as one will never seen before. Fire will fall from the sky and will wipe out a great part of humanity, the good as well as the bad, sparing neither priests nor faithful. The survivors will find themselves so desolate that they will envy the dead. The only arms which will remain for you will be the Rosary and the Sign left by My Son. Each day recite the prayers of the Rosary. With the Rosary, pray for the Pope, the bishops and priests.—Approved message of the Blessed Virgin Mary to Sr. Agnes Sasagawa , Akita, Japan; EWTN online library

Without a healthy relationship with God, one could easily read those words and be terrified. And yet, if we look carefully at the Gospel passage above, Jesus is not just speaking about the spiritual condition of mankind, but telling us about the dispositions that His people should have in those coming days—namely, the same as that of Noah and Lot.

IN THE DAYS OF LOT

Lot was living in Sodom—a city renowned for its immorality and disregard for the poor. [2]cf. footnote in New American Bible on Genesis 18:20 He was not expecting a chastisement when two angels greeted him at the city gate. So too, says St. Paul, many will not be expecting the chastisements that will come suddenly:

For you yourselves know very well that the day of the Lord will come like a thief at night. When people are saying, “Peace and security,” then sudden disaster comes upon them, like labor pains upon a pregnant woman,and they will not escape. (1 Thess 5:2-3)

Lot took the two angelic messengers into his home. And as the story unfolds, we see how God’s providence protects Lot moment by moment—not his house, his possessions, or career—but his soul. 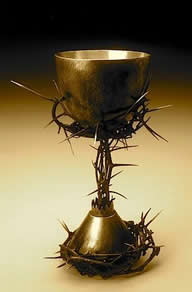 to have “intimacies” with the two angels (who appeared as men). At last, the perversions of that generation had gone far enough. The cup of divine justice was full, and overflowing…

The outcry against Sodom and Gomorrah is so great, and their sin so grave… (Gen 18:20)

Divine justice was about to fall, for the Lord could not find even ten righteous people in Sodom. [3]cf. Gen 18:32-33 But God intended on protecting those who were righteous, namely, Lot.

Then suddenly, there was an illumination.

[The angels] put out their hands, pulled Lot inside with them, and closed the door; at the same time they struck the men at the entrance of the house, one and all, with such a blinding light that they were utterly unable to reach the doorway. (v. 10-11)

It was an opportunity for Lot, and his family, to find refuge (and certainly, the blinding light could have been an opportunity for the wicked to recognize God’s presence and repent). As I wrote in Entering the Prodigal Hour, I believe the Lord will also provide these opportunities to those for whom we are interceding, such as fallen away family and friends, to find refuge in His mercy. But we all have free will—the choice to accept or refuse God:

Then the angels said to Lot… “We are about to destroy this place, for the outcry reaching the LORD against those in the city is so great that he has sent us to destroy it.” So Lot went out and spoke to his sons-in-law, who had contracted marriage with his daughters. “Get up and leave this place,” he told them; “the LORD is about to destroy the city.” But his sons-in-law thought he was joking. As dawn was breaking, the angels urged Lot on, saying, “On your way! Take with you your wife and your two daughters who are here, or you will be swept away in the punishment of the city.” When he hesitated, the men, by the LORD’S mercy, seized his hand and the hands of his wife and his two daughters and led them to safety outside the city.(v. 12-15)

A senior citizen wrote me recently with a troubled question:

I suffer from Parkinson’s disease, scoliosis, asthma, osteo-arthritis, two hernias, going deaf, and my lungs are compressed and being crowded by my scoliosis and hernia and reflux problems. As you can well imagine, I couldn’t run to save my life. What happens to people like us? It’s scary!

Lot felt he could not run either, and protested:

As soon as they had been brought outside, he was told: “Flee for your life! Don’t look back or stop anywhere on the Plain. Get off to the hills at once, or you will be swept away.” “Oh, no, my lord!” replied Lot. “You have 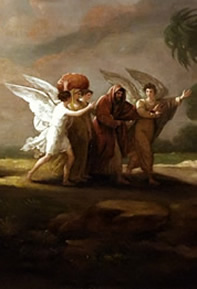 already thought enough of your servant to do me the great kindness of intervening to save my life. But I cannot flee to the hills to keep the disaster from overtaking me, and so I shall die. Look, this town ahead is near enough to escape to. It’s only a small place. Let me flee there — it’s a small place, isn’t it? — that my life may be saved.” “Well, then,” he replied, “I will also grant you the favor you now ask. I will not overthrow the town you speak of. Hurry, escape there! I cannot do anything until you arrive there.” (V. 17-22)

In this beautiful exchange, we see the Lord’s compassion and mercy. [4]There was mercy and compassion in the chastisement that befell Sodom and Gormorrah, though it is not as readily visible. Gen 18:20-21 speaks of “the cry against them”, the cry of the poor and oppressed. The Lord waited until the last possible moment before justice had to act, mercifully putting to an end the immoral corruption of those cities. As governments continue to push abortion and lewd sex education upon young children, who are as innocent as “angels”, we would be presumptuous to believe these perversions of justice will continue indefinitely. [Gal 6:7] Obviously, the town Lot was to flee to was intended to be part of the chastisement. But in caring for Lot, a place of refuge was created in the midst of the devastation—and the Lord would even wait until Lot was safe. Yes, God, in His mercy, will even shift His timelines:

The Lord does not delay his promise, as some regard “delay,” but he is patient with you, not wishing that any should perish but that all should come to repentance. But the day of the Lord will come like a thief… (2 Pet 3:9-10)

But neither is this to say that Lot was comfortable in this moment of divine providence; he had nothing but the shirt on his back, he had just lost everything. But Lot did not see it that way. Rather, he perceived the mercy of God toward him, “the great kindness of intervening to save my life.” That was the spirit of trust and childlike surrender that Jesus is now calling us to have as the first winds of this Great Storm descend… [5]read Raise Your Sails – Preparing for Chastisements

THE SPIRIT OF THE WORLD

All of this makes for a fitting comparison to our day, as Jesus said it could be. Make no mistake—the cup of justice is overflowing. The sins of Sodom and Gomorrah are dwarfed by the offenses of our day.  But God has also delayed divine justice so as to bring as many souls as possible into the refuge of His Mercy.

When once I asked the Lord Jesus how He could tolerate so many sins and crimes and not punish them, the Lord answered me, “I have eternity for punishing [these], and so I am prolonging the time of mercy for the sake of [sinners]. But woe to them if they do not recognize this time of My visitation.” —Jesus to St. Faustina, Divine Mercy in My Soul, diary, n. 1160

Unfortunately, Lot’s son-in-laws did not take the warnings seriously, just as so many today have failed to heed the signs all around us. They thought Lot was joking (today, they think the “Lots” are nuts [6]see Ark of Fools). They were infected with the spirit of the world, and would not receive the grace of that final illumination… 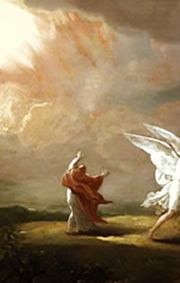 There was another danger lurking for Lot and his wife and daughters. It was the temptation to cease trusting in God’s providence and turn back in a spirit of fear, self-preservation, and independence. The angels had warned not to look back, to keep moving forward toward safety. But his wife’s heart was still in Sodom:

No one can serve two masters. He will either hate one and love the other, or be devoted to one and despise the other. You cannot serve God and mammon. (Matt 6:24)

TRUST… THE ROAD TO REFUGE

In the Lucan discourse, Jesus continues:

The admonition to Christians is clear: we are to place our trust in Jesus alone. We are to seek first the Kingdom, he said, and all that we need will be provided for—including, even, a place of refuge if that is what we need. Such a soul is then ready to meet Him at any moment.

The chastisements that are now inevitable will affect every soul on the planet. There is no where to hide, so to speak, save in the mercy of God. That is the place He is calling us to flee to now… [7]cf. Come Out of Babylon! to a place of absolute trust and abandonment in Him. No matter what comes, and no matter how grave our sins, He is willing to forgive and take us in. As it was said in the message of Our Lady of Akita, a chastisement would come “sparing neither priests nor faithful.” Given the gravity of this generation’s sins since that message was spoken in 1973 (the year, also, that the killing of the unborn was legalized in the United States), it is hard to imagine that the warning is not more relevant than ever.

But if I am in the refuge of Mercy, then, whether I live or whether or die, I am safe in the shelter of His love… in the Great Refuge and Safe Harbour of His Heart.

Hail, most merciful Heart of Jesus,
Living Fountain of all graces,
Our sole shelter, our only refuge;
In You I have the light of hope.