THE NOW WORD ON MASS READINGS
for Monday of the Fourth Week of Lent, March 16th, 2015 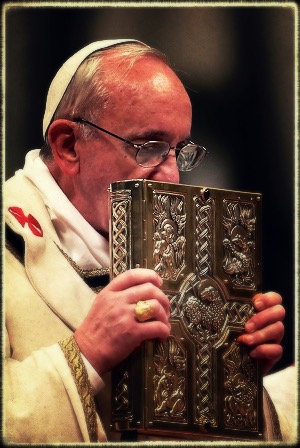 WHEN the official comes to Jesus and asks Him to heal his son, the Lord replies:

“Unless you people see signs and wonders, you will not believe.” The royal official said to him, “Sir, come down before my child dies.” (Today’s Gospel)

You see, Jesus had just returned from Samaria, a region of people whom the Jews considered to be ritually impure. He performed no miracles there—because no one asked for any. Instead, the woman at the well was thirsting for something greater: living water. And so we read:

Many more began to believe in him because of his word, and they said to the woman, “We no longer believe because of your word; for we have heard for ourselves, and we know that this is truly the savior of the world.” (John 4:41-42)

The miracles of Jesus were not an end in themselves, but a means to open people’s hearts to His life-saving word. After all, one can be raised from the dead, but still remain asleep in the heart. Jesus seemed to be saying to the official, Can’t you see: My word is life! My word is living! My word is effective! My word is your healing! It has the power to liberate and save you if you but put your trust in My word… [1]cf. Heb 4:12

The entirety of Creation came into existence by a Word spoken from the mouth of God. [2]cf. Gen 1:3 But that Word is not dead: It continues to speak, to reverberate, to create. As it says in today’s first reading regarding, ultimately, the “new heavens and new earth” in eternity:

….there shall always be rejoicing and happiness in what I create.

How many Catholics own Bibles, but never read them! We have time to read the internet, the newspaper, novels, sports magazines, Facebook, Twitter… but what about the only Book that can actually heal, transform, comfort, liberate, inspire, teach, and nurture your very soul? Why? Because it is living. It is Jesus Christ, the “Word made flesh” coming to you in word. [4]cf. John 1:14 And what a gift we Catholics have in that it is organized and laid out coherently every day in the Mass.

In a letter to me earlier this year, Fr. David Perren of Westminster Abbey in B.C., Canada wrote so beautifully:

For it is that daily Word, present in the scriptural texts for that day, which becomes sacramentally present on the altar. That specific Word which the Church is offering in a pre-eminent way to her children. That Word who in the one integral act of worship, offers Himself in the Holy Sacrifice of the Mass.

Fr.’s words, like the chants they sing there at the Abbey, echo the teaching of Vatican II:

The Church has always venerated the divine Scriptures just as she venerates the body of the Lord, since, especially in the sacred liturgy, she unceasingly receives and offers to the faithful the bread of life from the table both of God’s word and of Christ’s body. —Dei Verbum, n. 21

My dear brother and sister, give alms to yourself this Lent: buy a little Bible to carry with you everywhere (as Pope Francis has urged the faithful to do twice now in the past year). Open it every day, even just to read a few lines, and discover anew the power and presence of the Living Word.

For in the sacred books, the Father who is in heaven meets His children with great love and speaks with them; and the force and power in the word of God is so great that it stands as the support and energy of the Church, the strength of faith for her sons, the food of the soul, the pure and everlasting source of spiritual life. —Dei Verbum, n. 21

A Christian’s first task is to listen to the word of God, to listen to Jesus, because he speaks to us and saves us with his word… so that it becomes like a flame within us to illuminate our steps… —POPE FRANCIS, Homily, March 16th, 2014, CNS; Midday Angelus, January 6th, 2015, breitbart.com