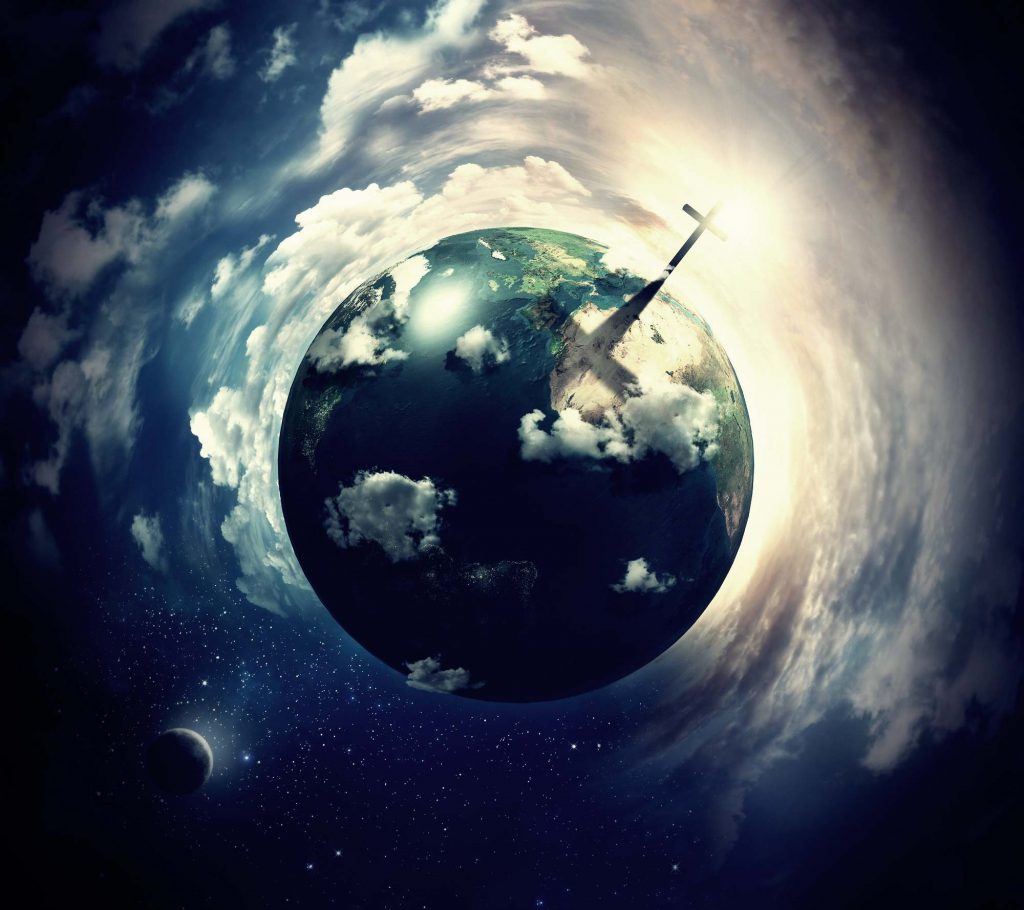 I’m being sarcastic, of course—but only a little. Because how often do we hear our bishops, priests, and fellow laymen speaking about Jesus? How often do we actually hear his name? How often are we reminded of the purpose of His coming, and thus, the mission of the entire Church, and hence our required personal response?

I’m sorry, but at least here in the Western World—not very often.

According to the angel of the Lord, Christ’s mission, and thus ours, was embedded in His name:

She will bear a son and you are to name him Jesus, because he will save his people from their sins. (Matthew 1:21)

Jesus didn’t come to start an organization that would commemorate Him through ornate liturgies, grand cathedrals, and tidy rituals; through perfunctory festivals, niceties, and nods of the status quo. No, Jesus “assembled” the “church” (the Greek word “ἐκκλησία” or ecclesia means “assembly”) in order that it would become the instrument of salvation through the preaching of the Gospel and administration of the sacraments. Baptism is the real-world application of the water that gushed forth from the side of Christ; the Eucharist and Confession are the real-world application of the Blood of Christ that cleanses us from sin. Christianity, and hence Catholicism, is all about saving people from sin that destroys peace and unity and separates us from God. That we want to erect glorious cathedrals, weave golden vestments, and lay marble floors is a sign of our love of God and a reflection of the Mystery, yes; but they are not essential nor necessary to our mission.

The Mass was given to us to perpetuate the saving power and presence of His Sacrifice on the Cross for the salvation of the world—not to make us feel good about ourselves for taking an hour out every week and dropping a few bucks in the collection plate. We come to Mass, or should, in order to hear Christ say “yes” to us again (through the re-presentation of that love on the Cross) so that we, in turn, can say “yes” to Him. Yes to what? To the free gift of eternal life through faith in Him. And thus, “yes” to spreading the “Good News” of that gift to the world.

Yes, the Church is unrecognizable today, in part, because of the sins and scandals that are grabbing the headlines. But perhaps most of all because she no longer preaches Jesus Christ!

Even Pope Francis, whose pontificate has become embroiled in numerous controversies, stated clearly:

…the first proclamation must ring out over and over: “Jesus Christ loves you; he gave his life to save you; and now he is living at your side every day to enlighten, strengthen and free you.” —POPE FRANCIS, Evangelii Gaudium, n. 164

But we have lost the narrative. We have broken the love story! Do we even know why the Church exists??

Many Catholics don’t even know what the word “evangelization” means. And bishops, who do, are often afraid to permit those who are called to evangelization to use their gifts. Thus, the Word of God remains hidden, stifled, if not buried beneath a bushel basket. The light of Christ is no longer clearly seen… and this is having devastating effects upon the entire world.

In our days, when in vast areas of the world the faith is in danger of dying out like a flame which no longer has fuel, the overriding priority is to make God present in this world and to show men and women the way to God. Not just any god, but the God who spoke on Sinai; to that God whose face we recognize in a love which presses “to the end” (cf. Jn 13:1) – in Jesus Christ, crucified and risen. The real problem at this moment of our history is that God is disappearing from the human horizon, and, with the dimming of the light which comes from God, humanity is losing its bearings, with increasingly evident destructive effects. —POPE BENEDICT XVI, Letter of His Holiness Pope Benedict XVI to All the Bishops of the World, March 12, 2009; vatican.va

A Great Shaking is here and coming. Because we have forgotten the heart of our mission: to make Jesus Christ loved and known, and thus, to draw all of creation into the heart of the Holy Trinity. Our mission is to bring others into a real and personal relationship with Jesus Christ, Lord and Saviour—a relationship that heals, delivers, and transforms us into a new creation. That is what the “new evangelization” means.

As you well know it is not a matter of merely passing on a doctrine, but rather of a personal and profound meeting with the Saviour.   —POPE JOHN PAUL II, Commissioning Families, Neo-Catechumenal Way. 1991.

Sometimes even Catholics have lost or never had the chance to experience Christ personally: not Christ as a mere ‘paradigm’ or ‘value’, but as the living Lord, ‘the way, and the truth, and the life’.  —POPE JOHN PAUL II, L’Osservatore Romano (English Edition of the Vatican Newspaper), March 24, 1993, p.3.

Conversion means accepting, by a personal decision, the saving sovereignty of Christ and becoming his disciple.  —ST. JOHN PAUL II, Encyclical Letter: Mission of the Redeemer (1990) 46

...we can be witnesses only if we know Christ first hand, and not only through others—from our own life, from our personal encounter with Christ. —POPE BENEDICT XVI, Vatican City, January 20th, 2010, Zenit

To this end, the “Triumph of the Immaculate Heart of Mary” that was promised at Fatima, and which is being accomplished as we speak, is not about the Virgin Mary, per se. The Triumph is about Mary’s role in making Jesus the center of the world again and in bringing to birth His entire mystical body (see Rev 12:1-2). In the approved revelations to Elizabeth Kindelmann, Jesus Himself explains how the “Woman” in the Book of Revelation, our Mother, is going to help bring about a renewed world.

The Lord Jesus had a really deep conversation with me. He asked me to urgently take the messages to the bishop. (It was March 27, 1963, and I did that.) He spoke to me at length about the time of grace and the Spirit of Love quite comparable to the first Pentecost, flooding the earth with its power. That will be the great miracle drawing the attention of all humanity. All that is the effusion of the effect of grace of the Blessed Virgin’s Flame of Love. The earth has been covered in darkness because of the lack of faith in the soul of humanity and therefore will experience a great jolt. Following that, people will believe. This jolt, by the power of faith, will create a new world. Through the Flame of Love of the Blessed Virgin, faith will take root in souls, and the face of the earth will be renewed, because “nothing like it has happened ever since the Word became Flesh.” The renewal of the earth, although flooded with sufferings, will come about by the power of intercession of the Blessed Virgin. —The Flame of Love of the Immaculate Heart of Mary: The Spiritual Diary (Kindle Edition, Loc. 2898-2899); approved in 2009 by Cardinal Péter Erdö Cardinal, Primate and Archbishop. Note: Pope Francis gave his Apostolic Blessing upon the Flame of Love of the Immaculate Heart of Mary Movement on June 19th, 2013

But here is the point: elsewhere in the diaries of Elizabeth, Our Lady explains that the Flame of Love burning in her heart “is Jesus Christ himself.”[1]The Flame of Love, p. 38, from Elizabeth Kindelmann’s diary; 1962; Imprimatur Archbishop Charles Chaput It’s all about Jesus. We have forgotten that. But Heaven is about to remind us in such a way that nothing like this will have “happened since the Word became Flesh.”

So, indeed, Jesus is the Main Event. It’s not about the world coming to kneel before the Catholic Church and kiss the ring of the Pontiff while we restore lace and Latin. Rather,

…that at the name of Jesus, every knee should bend, of those in heaven and on earth and under the earth, and every tongue confess that Jesus Christ is Lord, to the glory of God the Father. (Phil 2:10-11)

When that day comes—and it is coming—humanity will naturally turn again to everything that Jesus gave them through the Catholic Church: the Gospel, the sacraments, and that charity without which all is dead and cold. Then, and only then, will the Church become a true home for the world: when she herself is clothed in the humility, light, and love of the Son.

“And they shall hear my voice, and there shall be one fold and one shepherd.” May God… shortly bring to fulfillment His prophecy for transforming this consoling vision of the future into a present reality… It is God’s task to bring about this happy hour and to make it known to all… When it does arrive, it will turn out to be a solemn hour, one big with consequences not only for the restoration of the Kingdom of Christ, but for the pacification of… the world. We pray most fervently, and ask others likewise to pray for this much-desired pacification of society. —POPE PIUS XI, Ubi Arcani dei Consilioi “On the Peace of Christ in his Kingdom”, December 23, 1922

Oh! when in every city and village the law of the Lord is faithfully observed, when respect is shown for sacred things, when the Sacraments are frequented, and the ordinances of Christian life fulfilled, there will certainly be no more need for us to labor further to see all things restored in Christ… And then? Then, at last, it will be clear to all that the Church, such as it was instituted by Christ, must enjoy full and entire liberty and independence from all foreign dominion…  “He shall break the heads of his enemies,” that all may know “that God is the king of all the earth,” “that the Gentiles may know themselves to be men.” All this, Venerable Brethren, We believe and expect with unshakable faith. —POPE PIUS X, E Supremi, Encyclical “On the Restoration of All Things”, n.14, 6-7