WHEN my spiritual director asked me to write further about “false prophets,” I pondered on how they are often defined in our day. Usually, people view “false prophets” as those who predict the future incorrectly. But when Jesus or the Apostles spoke of false prophets, they were usually speaking about those within the Church who led others astray by either failing to speak the truth, watering it down, or preaching a different gospel altogether…

Beloved, do not trust every spirit but test the spirits to see whether they belong to God, because many false prophets have gone out into the world. (1 John 4:1)

There is a passage of Scripture that should cause every single believer to pause and reflect:

As this word echoes off the politically correct walls of our churches, we would do well to ask ourselves the question from the start: Am I myself a false prophet?

I confess that, for the first few years of this writing apostolate, I often wrestled with this question in tears, since the Spirit has often moved me to operate in the prophetic office of my Baptism. I simply did not want to write what the Lord was compelling me to regarding present and future things (and when I have tried to flee or jump ship, a “whale” has always spat me back upon the beach….)

But here again I point to the deeper meaning of the above passage. Woe to you when all speak well of you. There is a terrible disease in the Church and broader society as well: that is, the almost neurotic need to be “politically correct.” While courtesy and sensitivity are good, white-washing the truth “for the sake of peace” is not. [1]see At All Costs

I think modern life, including life in the Church, suffers from a phony unwillingness to offend that poses as prudence and good manners, but too often turns out to be cowardice. Human beings owe each other respect and appropriate courtesy. But we also owe each other the truth—which means candor. —Archbishop Charles J. Chaput, O.F.M. Cap., Rendering Unto Caesar: The Catholic Political Vocation, February 23rd, 2009, Toronto, Canada

This is no more apparent today than when our leaders fail to teach faith and morals, especially when they are most pressing and obviously needed.

Woe to the shepherds of Israel who have been pasturing themselves! You did not strengthen the weak nor heal the sick nor bind up the injured. You did not bring back the strayed nor seek the lost… So they were scattered for the lack of a shepherd, and became food for all the wild beasts. (Ezekiel 34:2-5)

Without shepherds, the sheep are lost. Psalm 23 speaks of a “good shepherd” leading his sheep through “the valley of the shadow of death,” 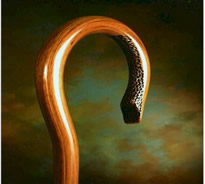 with a “rod and staff” to comfort and guide. The shepherd’s staff has several functions. The crook is used to grab a straying sheep and draw it into the flock; the staff is long so as to help defend the flock, keeping predators at bay. So it is with the appointed teachers of the Faith: they have the responsibility to draw the straying back as well as to fend off the “false prophets” who would lead them astray. Paul wrote to the bishops:

Keep watch over yourselves and over the whole flock of which the holy Spirit has appointed you overseers, in which you tend the church of God that he acquired with his own blood. (Acts 20:28)

There were also false prophets among the people, just as there will be false teachers among you, who will introduce destructive heresies and even deny the Master who ransomed them, bringing swift destruction on themselves. (2 Pt 2:1)

The great heresy of our time is “relativism” that has seeped like smoke into the Church, intoxicating vast portions of clergy and lay people alike with a desire for others to “speak well” of them.

In a society whose thinking is governed by the ‘tyranny of relativism’ and in which political correctness and human respect are the ultimate criteria of what is to be done and what is to be avoided, the notion of leading someone into moral error makes little sense. What causes wonderment in such a society is the fact that someone fails to observe political correctness and, thereby, seems to be disruptive of the so-called peace of society. —Archbishop Raymond L. Burke, Prefect of the Apostolic Signatura, Reflections on the Struggle to Advance the Culture of Life, InsideCatholic Partnership Dinner, Washington, September 18th, 2009

This political correctness is in fact the same “lying spirit” that infected the prophets of King Ahab’s court in the Old Testament. [2]cf. 1 Kings 22 When Ahab wanted to go into battle, he sought their counsel. All of the prophets, except one, told him he would succeed because they knew if they said the opposite, they would be punished. But the prophet Micaiah told the truth, that the king would in fact die on the battlefield. For this, Micaiah was thrown into prison and fed small rations. It is this very same fear of persecution that has caused a compromising spirit to rise up in the Church today. [3]cf. The School of Compromise

Those who challenge this new paganism are faced with a difficult option. Either they conform to this philosophy or they are faced with the prospect of martyrdom. —Fr. John Hardon (1914-2000), How to Be a Loyal Catholic Today? By Being Loyal to the Bishop of Rome; http://www.therealpresence.org/eucharst/intro/loyalty.htm

In the Western World, that “martyrdom,” so far, has not been bloody.

In our own time, the price to be paid for fidelity to the Gospel is no longer being hanged, drawn and quartered but it often involves being dismissed out of hand, ridiculed or parodied. And yet, the Church cannot withdraw from the task of proclaiming Christ and his Gospel as saving truth, the source of our ultimate happiness as individuals and as the foundation of a just and humane society. —POPE BENEDICT XVI, London, England, September 18th, 2010; Zenit

When I think of the many martyrs who valiantly went to their deaths, sometimes even deliberately traveling to Rome so as to be persecuted… and then how we hesitate today to stand for the truth because we don’t want to upset the equilibrium of our listeners, parish, or diocese (and lose our “good” reputation)… I tremble at the words of Jesus: Woe to you when all speak well of you.

The false prophet is one who has forgotten who his Master is—who has made people-pleasing his gospel and the approval of others his idol. What will Jesus say to His Church when we appear before His judgment seat and gaze upon the wounds in His hands and feet, while our own hands and feet are manicured with the praise of others?

The prophet is someone who tells the truth on the strength of his contact with God—the truth for today, which also, naturally, sheds light on the future. —Cardinal Joseph Ratzinger (POPE BENEDICT XVI), Christian Prophecy, The Post-Biblical Tradition, Niels Christian Hvidt, Foreword, p. vii

Trying to be faithful to Blessed John Paul II’s plea to young people to be ‘”morning watchmen” at the dawn of the new millennium’ has been a difficult task, a ‘stupendous task,’ as he said it would be. For at once, there are so many wonderful signs of hope all around us, most 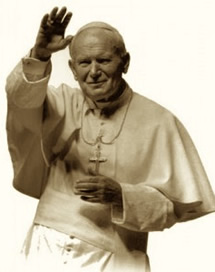 especially in the young who have responded to the Holy Father’s call to give their lives to Jesus and the Gospel of Life. And how can we not be grateful for the presence and intervention of our Blessed Mother at her shrines throughout the world? At the same time, the dawn has not arrived, and the darkness of apostasy continues to spread throughout the world. It is so widespread now, so pervasive, that the truth today is truly beginning to die out like a flame. [4]see The Smoldering Candle How many of you have written me about your loved ones who have caved in to the moral relativism and paganism of this day? How many parents have I prayed and wept with whose children have completely abandoned their faith? How many Catholics today no longer see Mass as relevant, as parishes continue to close and bishops import priests from abroad? How loud is the threatening voice of rebellion [5]see Persecution is Near being raised against the Holy Father and the faithful? [6]see The Pope: Thermometer of Apostoasy These are all signs that something terrible has gone wrong.

And yet, at the very same time that vast portions of the Church are caving in to the spirit of the world, the message of Divine Mercy is reaching out across the world. [7]cf. To Those in Mortal Sin Just when it would seem that we most deserve to be abandoned—like the prodigal son on his knees in pig manure [8]cf. Luke 15:11-32—that’s when Jesus has come to say that we too are lost and without a shepherd, but that He is the Good Shepherd who has come for us!

What man among you having a hundred sheep and losing one of them would not leave the ninety-nine in the desert and go after the lost one until he finds it? …Bu 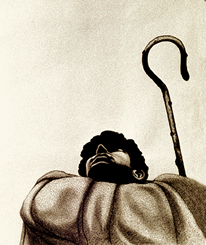 t Zion said, “The LORD has forsaken me; my Lord has forgotten me.” Can a mother forget her infant, be without tenderness for the child of her womb? Even should she forget, I will never forget you… and, upon his arrival home, he calls together his friends and neighbors and says to them, ‘Rejoice with me because I have found my lost sheep.’  I tell you, in just the same way there will be more joy in heaven over one sinner who repents than over ninety-nine righteous people who have no need of repentance.(Luke 15:4, Isaiah 49:14-15; Luke 15:6-7)

Yes, some of the false prophets of our day have no hope to offer. They speak only of punishment, judgment, doom, and gloom. But this is not our God. He IS love. He is constant, like the sun, ever inviting and beckoning humanity to Himself. Even though our sins may rise like plumes of thick, volcanic black smoke to obscure His light, He always remains shining behind it, waiting to send a ray of hope to His prodigal children, inviting them to come home.

Brothers and sisters, many are the false prophets among us. But God has also raised true prophets in our day as well—the Burkes, Chaputs, Hardons, and of course, popes of our times. We are not abandoned! But neither can we be foolish. It is absolutely necessary that we learn to pray and listen so as to recognize the voice of the true Shepherd. Otherwise, we risk mistaking the wolves for sheep—or becoming wolves ourselves… [9]watch Hearing God’s Voice-Part I and Part II

I know that after my departure savage wolves will come among you, and they will not spare the flock. And from your own group, men will come forward perverting the truth to draw the disciples away after them. So be vigilant and remember that for three years, night and day, I unceasingly admonished each of you with tears. (Acts 20:29-31)