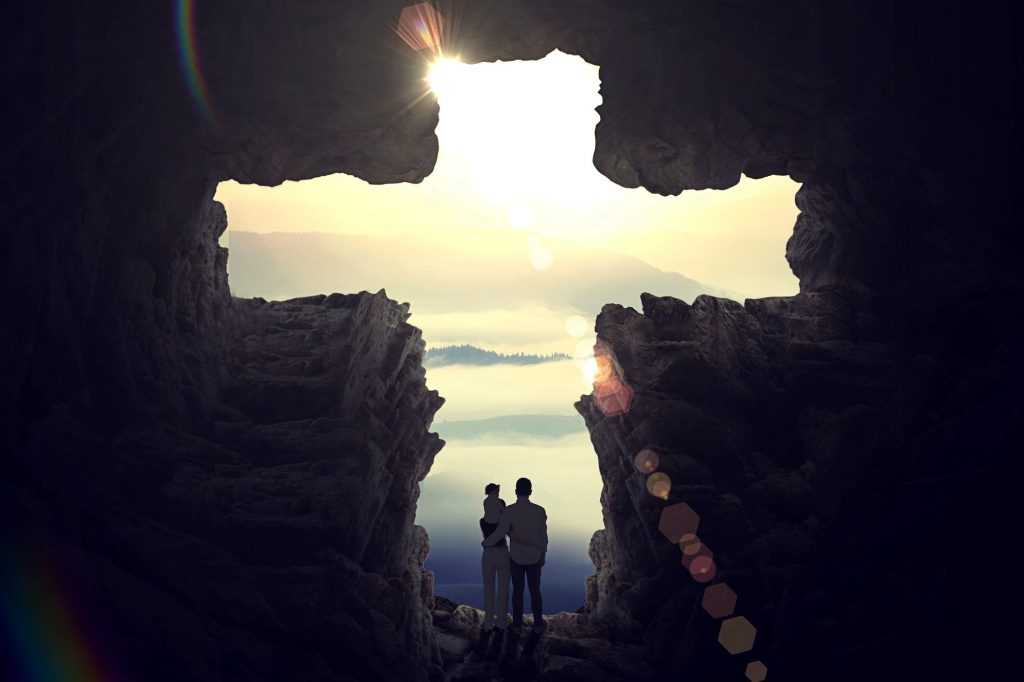 IT is no longer a fringe notion that the world is plunging into a deep crisis. All around us, the fruits of moral relativism abound as the “rule of law” that has more or less guided nations is being re-written: moral absolutes have been all but abolished; medical and scientific ethics are mostly ignored; economic and political norms that maintained civility and order are rapidly being abandoned (cf. The Hour of Lawlessness). The watchmen have cried that a Storm is coming… and now it’s here. We are heading into difficult times. But bound in this Storm is the seed of a coming new Era in which Christ will reign in His saints from coastland to coastland (see Rev 20:1-6; Matt 24:14). It will be a time of peace—the “period of peace” promised at Fatima:

Yes, a miracle was promised at Fatima, the greatest miracle in the history of the world, second only to the Resurrection. And that miracle will be an era of peace which has never really been granted before to the world. —Cardinal Mario Luigi Ciappi, papal theologian for Pius XII, John XXIII, Paul VI, John Paul I, and John Paul II; October 9th, 1994; Introduction to the The Apostolate’s Family Catechism

Thus, it is necessary that the supports that have led the Church and the world into a false peace and security be pulled from beneath us. God is doing this, not so much to punish, but prepare us for a New Pentecost—a renewal of the face of the earth.

But this requires that the satanic system of the Dragon, woven into humanity’s history over the past 2000 years, be brought to nothing—be “chained” in the abyss (cf. Rev 20:1-2). Thus, said St. John Paul II, we have arrived at the “final confrontation” of our times. I can’t help but recall that prophecy given in Rome in the presence of Pope Paul VI that truly seems to be unfolding now by the hour:

Because I love you, I want to show you what I am doing in the world today. I want to prepare you for what is to come. Days of darkness are coming on the world, days of tribulation… Buildings that are now standing will not be standing. Supports that are there for my people now will not be there. I want you to be prepared, my people, to know only me and to cleave to me and to have me in a way deeper than ever before. I will lead you into the desert… I will strip you of everything that you are depending on now, so you depend just on me. A time of darkness is coming on the world, but a time of glory is coming for my Church, a time of glory is coming for my people. I will pour out on you all the gifts of my Spirit. I will prepare you for spiritual combat; I will prepare you for a time of evangelism that the world has never seen…. And when you have nothing but me, you will have everything: land, fields, homes, and brothers and sisters and love and joy and peace more than ever before. Be ready, my people, I want to prepare you… —Pentecost Monday of May, 1975, St. Peter’s Square, Rome, Italy; spoken by Dr. Ralph Martin

If God is pulling out all human supports, then there are three things that will remain:

So faith, hope, love remain, these three; but the greatest of these is love. (1 Corinthians 13:13)

After that introduction, let’s focus briefly on the first of these: faith. 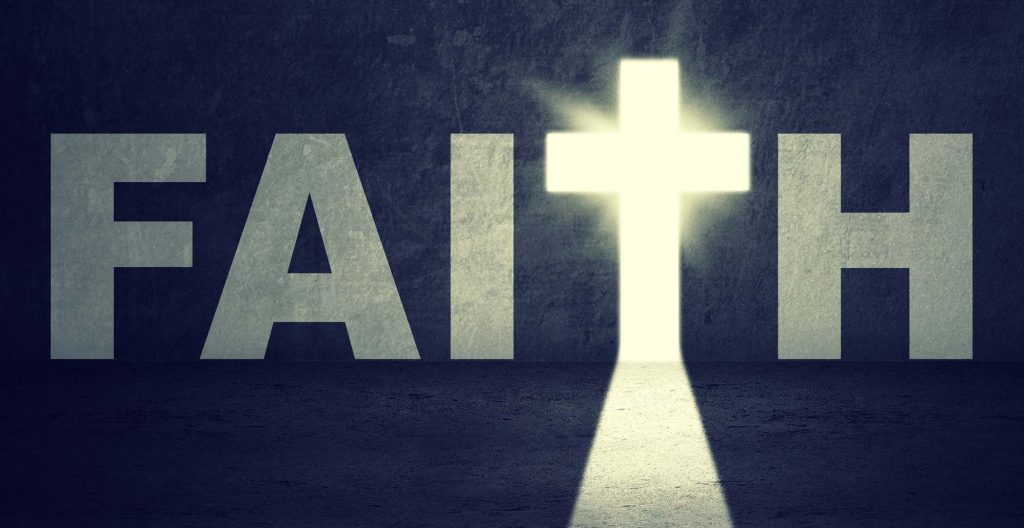 The purpose of this, and the following writings, is not to give a theological explanation of faith, hope and love so much as to bring them into the practical “here and now”—of what they must be in our times. Because it is precisely these three theological virtues that are going to carry you through the Storm.

The Catechism of the Catholic Church says:

Faith is the theological virtue by which we believe in God and believe all that he has said and revealed to us, and that Holy Church proposes for our belief, because he is truth itself. —n. 1814

Many of us are going through the most difficult interior trials right now, not because God is vengeful, but because He loves us and wants us to be free.

For freedom Christ set us free; so stand firm and do not submit again to the yoke of slavery… At the time, all discipline seems a cause not for joy but for pain, yet later it brings the peaceful fruit of righteousness to those who are trained by it. (Galatians 5:1, Hebrews 12:11)

Jesus said, “I am the truth.” As such, we cannot edit God. We must believe “all that he said and revealed to us” because if “the truth will set you free,” then “all” that has been revealed is for our freedom. If you are compromising, not only by ignoring certain moral precepts of Catholic teaching in a kind of nod to “tolerance” (such as her teachings on marriage or abortion), but permitting sin in little areas of your life, this is the first sign that you are lacking true faith in God. The sin of Adam and Eve was precisely this: taking matters into their own hands. Moral relativism and individualism are among the most harmful mindsets in our times because they essentially place one’s ego upon what is rightly God’s throne. They are, in fact, precursors to the Antichrist who “who opposes and exalts himself above every so-called god and object of worship, so as to seat himself in the temple of God, claiming that he is a god…” [1]2 Thessalonians 2:4

True faith is obedience to the Creator’s designs.

A friend of mine said to me recently, “Even if I go to buy a t-shirt, I take it to prayer. This isn’t scrupulosity—it’s intimacy.” Trusting Jesus with the littlest things in your life is not only how you become the best of friends with Him but how you become “like a little child”—a pre-condition to entering the Kingdom of Heaven.[2]cf. Matthew 18:3 My friend continued, “When I let Jesus into my decisions, and then act when I feel peace, it prevents Satan from coming back and playing on any sense of guilt. Because then I can say to the Accuser in reply, ‘Whether I made the right decision or not, I made it with Jesus as best I could. And even if it was the wrong decision, I know He will make all things work to the good because I loved Him in that moment.'” Faith is letting God reign, not only on Sunday for one hour, but every minute of every day in every decision. How many of us are doing this? And yet, this was normal Christianity in the early Church. It is still meant to be normative.

True faith is a communion of intimacy with God.

Our faith must go even deeper, though, than simply allowing God into daily decisions. True faith must trust that He is Lord over everything in our lives. That is, true faith accepts all the trials that come over which you have no control; authentic faith accepts the suffering over which you have no power—though faith can and should expect God to work in and through them, if not deliver one from them. And perhaps the hardest test of faith is trusting in Jesus that, when you have made a real mess of things, He can still fix them, still make them work toward the good.

By faith “man freely commits his entire self to God.” For this reason the believer seeks to know and do God’s will. —CCC, n. 1814

So you see, then, faith is not an intellectual exercise in merely acknowledging that a “Higher Power” exists. “Even the demons believe—and shudder,” said St. James.[3]cf. James 2:19 Rather, Christian faith is completely and totally handing ever aspect of your life over to Him “because He cares for you.” [4]1 Pet 5:7

True faiths abandons everything and “all of me” into God’s hands.

Last, faith believes, not only in God, but in the power of God—the power to liberate, to heal, to open the eyes of the blind, make the lame walk, the mute to speak, and the dead to rise again; to free the addict, heal the broken-hearted, and mend the unmendable. The Church today no longer lives with this expectation because we no longer believe like this. As I wrote in Rationalism and the Death of Mystery, the post-modern mind has essentially reasoned away the power of God. I venture that more Christians trust in Google for the answer to their prayers than God. Mary Healy, a professor of Sacred Scripture and member of the Pontifical Biblical Commission, writes:

Everywhere Jesus went he was besieged by the sick and infirm. Nowhere do the Gospels record that he instructed a person simply to bear the suffering assigned to them. In no case does he indicate that a person is asking for too much and should be content with a partial healing or no healing. He invariably treats illness as an evil to be overcome rather than a good to be embraced… Have we too easily accepted the idea that sickness should simply be embraced? Do we too easily assume that if a person is ill, God wants her to remain that way for her good? Could our resignation to illness or infirmity even sometimes be a cloak for unbelief? Scripture does not say that the Lord will always heal in response to our prayer if only we have enough faith… However, it is reasonable to conclude that the Lord desires to heal far more often than we think. —from Healing: Bringing the Gift of God’s Mercy to the World, Our Sunday Visitor; published in Magnificat, January 2019, p. 253

True faith believes that Jesus is the same “yesterday, today, and forever,” [5]Heb 13:8 that is, He still works signs and wonders when we believe.

In summary, our faith must be obedient; it must be intimate; it must be total; and it must be expectant. When it is all four, God is indeed allowed to begin releasing his power in our lives.

You are important to the Lord and He awaits your Yes. Repent and serve the Lord faithfully. I ask you to keep the flame of your faith alight. You are living in the time of tribulations, and only by the power of prayer can you bear the weight of the trials that are to come. Take care of your spiritual life. Everything in this life passes, but the Grace of God in you will be eternal. Do not forget: in your hands the Holy Rosary and Sacred Scripture; in your hearts, the love of truth. Courage. When all seems lost, the Victory of God will come for the righteous. You will yet drink the bitter chalice of pain, but after all suffering you will be rewarded. This will be the time of the Definitive Triumph of My Immaculate Heart. —Our Lady allegedely to Pedro Regis, January 15, 2019; Pedro enjoys the support of his bishop

The Now Word is a full-time ministry that
will continue this year by your support.
Bless you, and thank you.