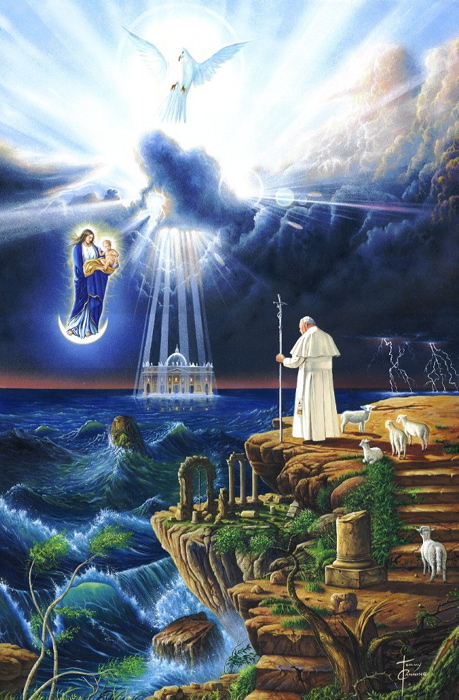 "Be Not Afraid", by Tommy Christopher Canning

This writing was placed on my heart last night… the woman clothed with the sun appearing in our times, labouring, about to give birth. What I didn’t know was that this morning, my wife was going into labour! I will let you know the outcome…

There is much on my heart these days, but the battle is very thick, and writing has been as easy as jogging in a neck-high swamp.  The winds of change are blowing hard, and this writing, I believe, may explain why… Peace be with you! Let us hold one another in prayer that in these times of change, we will shine with the holiness proper to our calling as sons and daughters of a victorious and humble King!

THE sign of this ark of the covenant appears before a great battle between the dragon and the Church, that is, a persecution. This ark, and the symbolism it carries, is all part of that "sign."

THE ARK OF THE OLD COVENANT 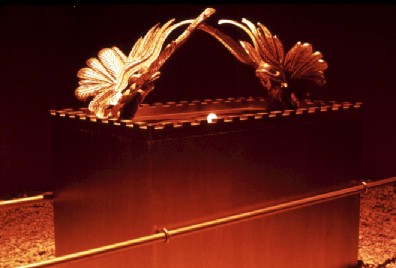 The ark constructed by David had one purpose: to contain the Commandments given to the people of Israel. One of it’s main features was the "mercy seat" crowned with two Cherubim.

As I have expounded previously, Mary is the "Ark of the New Covenant," one of her many titles in the Church (see, Understanding the "Urgency" of Our Times). She too carried within her womb the "word of God," Jesus Christ, the Word made flesh.

But the symbol which I want to highlight now is the mercy seat that covered the Ark. The mercy seat was one of the most distinguishing features of the Ark; it was the place from where God would speak to His people.

Mary, the new Ark, appeared in Fatima in 1917. She held back an angel with a flaming sword from executing justice upon the world. That intervention from on high ushered in a "time of grace." God announced this from the Mercy Seat. For shortly after, in the 1930’s, Jesus appeared to St. Faustina, naming her His "secretary of Divine Mercy" (a grace He said would continue once she was in Heaven.) Her role was to announce to the world that it was now living in the "time of mercy," before the "Day of justice" would come upon the earth. This time of mercy could draw to a conclusion at any moment:

When I asked the Lord Jesus how He could tolerate so many sins and crimes and not punish them, the Lord answered me, I have eternity for punishing [these], and so I am prolonging the time of mercy for the sake of [sinners]. But woe to them if they do not recognize this time of My visitation. —Divine Mercy in My Soul, Diary of St. Faustina, n. 1160

The appearance, then, of the Ark with its Mercy Seat in our times, particularly as we see daily the signs of a growing persecution and nature itself in mysterious convulsions, gives us pause to reflect upon the prophetic words of St. John in the Apocalypse. It is a call to deepen our response to Jesus who asked us to "watch and pray." It is a sign from Heaven calling us to sincere repentance, to abandon the foolish pursuit of illusory desires, to pursue with renewed zeal the will of God, and to remember that we are merely strangers and sojourners in this world.

It is significant, then, that in light of Revelation 11:19, "the Ark", the Blessed Mother, appeared to St. Faustina speaking these words:

Oh, how pleasing to God is the soul that follows faithfully the inspirations of His grace! I gave the Savior to the world; as for you, you have to speak to the world about His great mercy and prepare the world for the Second Coming of Him who will come, not as a merciful Savior, but as a just Judge… Speak to souls about this great mercy while it is still time for [granting] mercy. —n. 635

TODAY IS THE DAY!

Do not for a second believe the lie that it is too late to be something for God! Let God decide when it is too late for you to be a saint. Didn’t St. Francis abandon all for Christ in a day? He discarded his wealth and fame, and gave all to God, and is now among the greatest of saints. Didn’t St. Teresa of Avila drag her heels for years? And yet, she is now a doctor of the Church. Didn’t St. Augustine play games with God for all of his youth, and yet is now one of the greatest teachers of the Faith? Do not listen to the lies of Satan which lure souls into laziness, sloth, or apathy. His cunning will tell you to leave your soul in lukewarmness for just another day.

But I shout with all my heart:

Today, when you hear his voice, do not harden your hearts! (Heb 4:7)

The Lord is looking for souls this very hour who are willing to drop their nets and follow Him without reserve. And where you find in yourself weakness and unwillingness, this is a cause for you to humble yourself before Him, making yourself, therefore, very acceptable to Him (Psalm 51:19).

TR
IUMPH OF THE TWO HEARTS

The Ark and the Mercy Seat are intimately and inseparably united. The Word resides within the Ark who resides beneath the Mercy Seat. Indeed, had Mary not been overshadowed by the mercy of God, she would not have been "full of grace." But Christ has united her to Himself, taking flesh from her flesh, uniting spirit to Spirit. Was not the Sacred Heart of Jesus molded from the cells immaculately preserved by the Holy Spirit in the Virgin Mary, and nurtured by the blood of her Immaculate Heart? (Luke 1:42) Was not His human nature formed also under her counsel and guidance? (Luke 2:51-52) And did He not honor and love His mother, even as an adult, until His very last breath? (John 2:5; 19:26-27)

But the mystery of this union of Jesus and Mary in the flesh is only magnified by the profound union of Hearts which exists 2000 years later. If we could but for a moment be immersed in the love of Jesus and Mary for one another, we would be eternally changed. For the love they share for one another is the same love which bleeds, and cries, and weeps for us today. For we are her children, and Christ is our brother, through whom we were created and reconciled to God. A victory for Christ is a victory for His Mother. And a soul won by her love, is a soul won for her Son.

The Ark and the Mercy Seat. The Mother and the Son. The Queen and the King. And when Christ has bound the ancient serpent for a thousand years, we shall live and share in the Triumph of the Two Hearts.