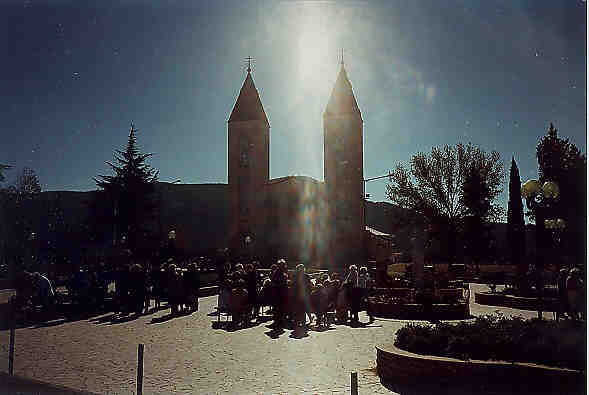 SHORTLY before my flight from Rome to Bosnia, I caught a news story quoting Archbishop Harry Flynn of Minnesota, USA on his recent trip to Medjugorje. The Archbishop was speaking of a luncheon he had with Pope John Paul II and other American bishops in 1988:

Soup was being served.  Bishop Stanley Ott of Baton Rouge, LA., who has since gone to God, asked the Holy Father: “Holy Father, what do you think of Medjugorje?”

Indeed, that’s what I’d heard coming from that Medjugorje… miracles, especially miracles of the heart. I’d had a number of family members experience profound conversions and healings after visiting this place.

One Great Aunt of mine began the long climb up Mount Krezevac several years ago. She had terrible arthritis, but wanted to make the climb anyway. Next thing she knew, she was suddenly at the top, and all her pain gone. She was physically healed. Both her and her husband became deeply committed Catholics. I prayed the Rosary by her bedside shortly before she died.

Two other relatives have spoken of tremendous inner healing. One, who was suicidal, has said to me repeatedly, “Mary saved me.” The other, having experienced the deep wound of divorce, was deeply healed in her visit to Medjugorje, something she speaks of till this day several years later.

Earlier this year, I wrote a note to our ministry base asking for someone to donate a car. I was tempted to simply take a loan and buy an older car. But I felt I needed to wait. Praying before the Blessed Sacrament, I heard the words, “Let me give you gifts. Seek nothing for yourself.“

When I came to pick up the car, there was nothing in it—nothing but a little ornament with a picture of Our Lady of Medjugorje. We call it “Mary’s Car”.

My first night in Medjugorje, a young pilgrimage leader knocked on my door. It was quite late, and I could see she was excited. “You’ve got to come see the bronze statue of the crucified Christ. It’s weeping.”

We ventured out in the dark until we arrived at this large monument. From His head and arms was running some kind of fluid which she said she’d only seen once before. Pilgrims were gathered around and applying hankerchiefs to the statue wherever the oil was dripping.

Actually, the right knee of the statue has been exuding a fluid for some time now. During my four day stay, there wasn’t a moment when there weren’t at least a half dozen people gathered around trying to get at least a glimpse of the phenomenon, and reaching up touching, kissing it, and praying.

What grabbed my heart the most in Medjugorje was the intense prayer taking place there. As I wrote in “A Miracle of Mercy“, when I walked into the hustle and bustle of St. Peter’s Basilica in Rome, the words entered my heart, “If only My people were as adorned as this church!“

When I arrived at Medjugorje and witnessed the powerful devotion, I heard the words, “These are the adornments I desire!” Long lines to confessionals, back to back Masses in several languages during the course of the day, afternoon and evening Eucharistic Adoration, the famous trek up Mount Krezevac toward the white cross… I was deeply struck by how Christ-centered Medjugorje is. Not what one might expect, given that Mary’s alleged apparitions are the reason for the focus on this village. But the hallmark of authentic Marian spirituality is that it leads one to an intimate and living relationship with the Holy Trinity.  I experienced this powerfully on my second day there (see “A Miracle of Mercy“). You can also read about my “miracle ride” to get to my concert outside of Medjugorje.

I had the privilege to lead the music at the English Mass on my third morning there. The church was packed as the bells tolled beginning the service. I began to sing, and it seemed that from that first note on, we were all immersed in a supernatural peace. I heard from many people who were deeply moved at the Mass, as was I.

One woman in particular caught my attention later at supper. She began to explain how, at the consecration, she suddenly saw the church begin to fill with angels. “I could hear them singing… it was so loud, so beautiful. They came and knelt face to the ground before the Eucharist. It was amazing… my knees began to buckle.” I could see she was visibly moved. But what really touched me was this: “After communion, I could hear the angels singing in four part harmony with your song. It was beautiful.”

It was a song I wrote!

THE GIFT OF TEARS

During lunch one day, a large woman sat across from me puffing a cigarette. When someone brought up the obvious danger of smoking, she made an honest confession. “I don’t really care too much about myself, and so I smoke.” She began to tell us that her past was quite rough. As a way of dealing with it, she would just laugh. “Instead of crying, I just laugh. It’s my way of dealing with… not facing things. I haven’t cried in a long time. I won’t let myself.”

After lunch, I stopped her on the street, held her face in my hands and said, “You are beautiful, and God loves you so much. I pray that He gives you the ‘gift of tears’. And when it happens, just let them flow.”

On my last day, we had breakfast at the same table. “I saw Mary,” she said to me beaming. I asked her to tell me all about it.

“We were coming off the mountain when my sister and I looked up at the sun. I saw Mary standing behind it, and the sun was positioned over her tummy. The baby Jesus was inside the sun. It was so beautiful. I started to cry and I just couldn’t stop. My sister saw it too.”

“You got the ‘gift of tears!'” I rejoiced. She left also, it seemed, with the gift of joy.

At 8:15am on my third day in Medjugorje, the visionary Vicka was going to speak to the English pilgrims. We walked along a winding dirt path through vineyards until we finally arrived at her parent’s home. Vicka stood atop stone steps where she began to address the growing crowd. It made me think of the impromptu preaching of Peter and Paul in the Acts of the Apostles.

It was my understanding that she was going to simply repeat the message that she claims Mary is giving to the world today, calling us to “Peace, Prayer, Conversion, Faith, and Fasting”. I watched her carefully as she proclaimed a mes sage she has given thousands of times over the course of 25 years since the apparitions began. Being a public speaker and singer, I know what it’s like to give the same message over and over again, or sing the same song hundreds of times. Sometimes you have to force your interest a bit.

But as Vicka spoke to us through a translator, I began to watch this women light up with delight. At one point, she seemed hardly able to contain her joy as she encouraged us to be obedient to Mary’s messages. (Whether they come from Mary or not, they certainly do not contradict the teachings of the Catholic Faith). I finally had to close my eyes and just soak in the moment… soak in this person’s joy at being faithful to the mission she was given. Yes, that was the source of her joy:  doing God’s will. Vicka demonstrated how the mundane and habitual can be transformed when done with love; how we can be transformed through our obedience, into love and joy.

There were many other miracles I heard about while there… two brothers saw the eyes of Mary move in a famous statue of Our Lady of Lourdes inside St. James Church. There were accounts of people witnessing the sun pulse and change colors. And I heard about people seeing Jesus in the Eucharist during adoration.

On my last day as I was leaving my hotel to catch my cab, I met a lady who was in Medjugorje by herself. I sat down and we chatted a few moments. She said, “I feel close to Mary and Jesus, but I want to experience the Father in a deeper way.” My heart jumped as a spurt of electricity bolted through my body. I leapt to my feet.  “Do you mind if I pray with you?” She agreed. I put my hands on this daughter’s head, and asked that she would have a profound encounter with the Father. As I got into the cab, I knew this prayer was going to be answered.

I hope she writes to tell me all about it.

In his letter to the Romans, St. Ignatius wrote:  “Within me is the living water which says deep inside me: ‘Come to the Father.'”

The Church commission has yet to judge on the validity of the apparitions. I will respect whatever the outcome may be. But I know what I saw with my own eyes:  a deep hunger and love for God. I once heard that people who go to Medjugorje come back as apostles. I met many of these apostles—several who were back to this village for their fifth or sixth time—one even for her fifteenth! I didn’t ask why they were back. I knew. I had experienced it too. Heaven is visiting earth in this place, most particularly through the Sacraments, but in a very pronounced and special way. I also experienced Mary in a way which has touched me deeply, and I think, changed me.

Having read her messages, tried to live them, and witnessed the fruit of them, I have trouble not believing that something heavenly is going on. Yes, if Medjugorje is the work of the devil, it’s the biggest mistake he’s ever made.

It is impossible for us not to speak about what we have seen and heard. (Acts 4:20)