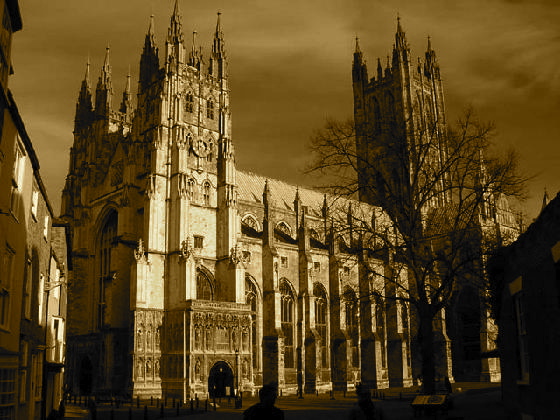 THERE is a Great Storm coming, and it is already here, in which those things built on sand are crumbling. (First published October, 12th, 2006.)

Everyone who listens to these words of mine but does not act on them will be like a fool who built his house on sand. The rain fell, the floods came, and the winds blew and buffeted the house. And it collapsed and was completely ruined. (Matthew 7:26-27)

Already, the driving winds of secularism have shaken apart several mainstream denominations. The United Church, the Anglican Church of England, the Lutheran Church, the Episcopalian, and thousands of other smaller denominations have begun to cave in as the raging flood waters of moral relativism pound at their foundations. Permission of divorce, birth control, abortion, and gay marriage has eroded the faith so drastically that the rains have begun to wash large numbers of believers out of their pews.

In the Catholic Church, there is also severe damage. As I wrote in Persecution (Moral Tsunami), many theologians, scholars, laypeople, nuns, and even clergy in high ranks have succumbed to the waves of this Storm. But that which is built on the rock of Peter is standing. For Christ promised that the gates of hell would not prevail against the Church which He himself would build.

There is a fault sometimes found among Catholics called "triumphalism," a kind of excessive exultation over the truth of, or truths of the Catholic Faith. It is my desire to avoid this error while at the same time shouting from the rooftops what Christ himself commanded us to do: preach the Gospel! Not just part of the Gospel, but the whole Gospel which includes the wonderful treasury of spirituality, moral theology, and above all the Sacraments, which have been passed down to us through the ages. What will Christ say to us on the Day of Judgment if we have kept the treasury locked because we did not want to hurt someone’s feelings? That we hid the Sacraments beneath a bushel basket for fear of seeming un-ecumenical? That we ceased to invite others to the Eucharistic Banquet because there were serious leaks in the roof?

Can we not see with our own eyes what is happening to those houses built on sand, even if they are houses which had been standing for centuries? The constancy of the papacy, particularly in this past century of war, turmoil, and apostasy is surely a witness to the truth of Matthew 16:18!

And I tell you, you are Peter, and on this rock I will build my church, and the powers of death shall not prevail against it.

And yet, I know I am trying to raise my little voice above the roaring train of biased media, anti-Catholic propaganda, and yes, our own sins, televised in color for all to see. Alas, hasn’t the Church been a contradiction from the beginning? Peter, the first Pope, denied Christ. The other apostles fled Christ in the Garden. Paul and Barnabas had deep disagreements. Peter was chastised by Paul for hypocrisy. The Corinthians were divisive… and on and on. Indeed, we are at times our own worst enemy.

Still, Christ knew this would be the case. Speaking prophetically, He turned to Simon Peter before entering His Passion and said,

Simon, Simon, behold Satan has demanded to sift all of you like wheat, but I have prayed that your own faith may not fail; and once you have turned back, you must strengthen your brothers.  (Luke 22:31-32)

And so today, Satan continues to sift all of us like wheat. And yet, I hear Christ saying once again to Peter, in his successor Pope Benedict XVI, "You must strengthen your brothers." You see, we will find strength in this Pope, we will find security and shelter from the storm of Confusion, for it is Christ Himself who commanded Peter to "feed my sheep". To feed us with the truth which sets us free.

It is not my intent to point fingers, but rather to extend a hand, to invite anyone who will listen to come to the Family Table where Christ will feed us. The Catholic Church is not mine. It is not the Pope’s. It is Christ’s. It is the Church He built on rock.

And that rock, He said, was Peter.

Beneath the staff of this shepherd, Pope Benedict, is the safest place to be in the midst of this rising storm. Christ made it so.

For that which is built on sand is crumbling.

Church of England leaders warned yesterday that calling God "He" encourages men to beat their wives… The recommendation—fully endorsed by Archbishop of Canterbury Dr. Rowan Williams, puts a question mark over huge swathes of Christian teaching and practice… It throws doubt on whether the principal Christian prayer should continue to be known as the Lord’s Prayer and begin "Our Father". The rules also throw into question the role of the Bible by calling for reinterpretations of stories in which God uses violence.  —Daily Mail, UK, October 3rd, 2006

The new president of the Episcopal Divinity School is openly gay and an outspoken advocate of abortion and "LGBT" (Lesbian Gay Bisexual Transexual) rights… [From a sermon on her blog]: "When a woman wants a child but can’t afford one… or access to health care, or day care, or adequate food… the abortion is a blessing." —Catholic Online, April 2, 2009

Canterbury Cathedral is falling apart at the seams, with chunks of masonry dropping off its walls and a fifth of its internal marble pillars held together by duct tape. —April 10th, 2006 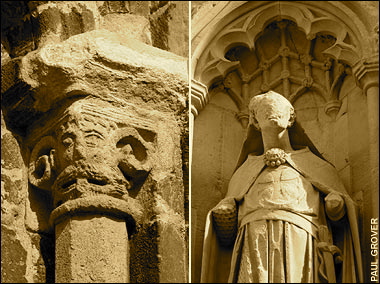