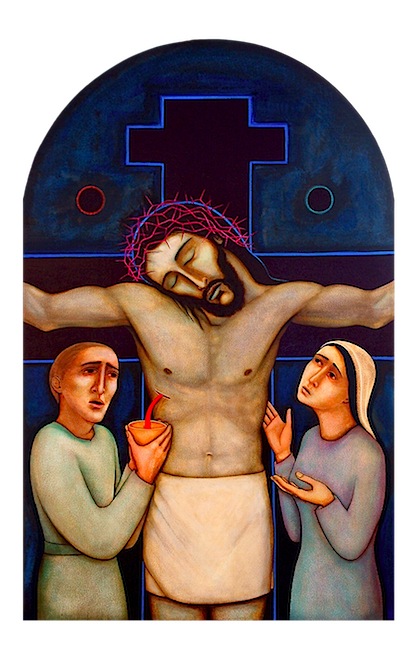 SO many of you have written me, overwhelmed by the division in your marriages and families, by the pain and injustice of your present situation. Then you need to know the secret to conquering in these trials: it is with the love that triumphs. These words came to me before the Blessed Sacrament:

The love that triumphs does not run from the Garden of betrayal, nor escape from the verbal scourging. It does not dispense with the crown of mental anguish, nor resist the purple robe of mockery. The love that triumphs takes up the heavy load, and walks each step under the crushing weight of trial. It does not run away from the Mount of Abandonment, but rather mounts the Cross. The love that triumphs receives the nails of anger, the thorns of jeers, and embraces the harsh wood of misunderstanding. It does not hang upon the beams of humiliation for only a minute, or even an hour… but endures the poverty of the moment until the bitter end—drinking the gall it is offered, enduring the rejection of its company, and the injustice of it all—until the heart itself is pierced with the wound of love.

If you wish to conquer, then you too must love with the Love that triumphs.

The way we came to know love was that he laid down his life for us; so we ought to lay down our lives for our brothers. (1 John 3:!6)

A TRUE STORY OF TRIUMPH

A friend has given me permission to tell this incredible story of a love that triumphed.

She learned that her husband had been cheating on her for over 13 years. During this time, she was abused by him physically, verbally, and emotionally. A retired man now, he would spend the day at home, and then in the evening, slip out to see his mistress. She knew it. He knew it. And yet he acted as if it was absolutely normal. Then, like clockwork, he would return home, crawl into her bed, and fall asleep.

She suffered an anguish that could rightly be called "hell." Tempted to abandon him many times, she instead knew she had to somehow honor her vows. One day in prayer, the Lord said to her: "I am calling you to a higher form of love." Sometime later, the Lord said, "In three moons time, your husband will be brought to his knees…" He assured her that her sufferings and prayers for her husband would not be wasted, but that "the price of a soul costs much." (By "three moons," the Lord meant three liturgical calendars. This Easter is that third moon.)

Last fall, the husband was diagnosed with cancer. This, she suspected, would begin the descent to his knees. But he continued his extramarital affair, despite his failing health. Again, the Lord encouraged her, saying that every tear drop of hers was counted—none would be wasted. And that soon, his relationship with the "other" would come to a "bitter and abrupt end."

Then, about two months ago, the husband had a "seizure." An ambulance was called—and then several policemen. It took six men to hold him down as he growled and cursed and scowled, casting a terrifying look upon the attendants. He was taken to the hospital and sedated. That week, after his release, he paid one more visit to his mistress… but something happened. The relationship ended abruptly and bitterly, as the Lord predicted.

Inexplicably, the husband came home, and as if scales were falling off his eyes he began to see the truth of his actions. Each day, when he looked at his wife, he began to weep. "You never abandoned me, though you should have," he repeated over and over. Day after day, when he saw her in the hall or preparing food in the kitchen, he would begin to cry, beg forgiveness, and say again, "I can’t believe I did that to you… and you’re still here. I’m so sorry, I’m so sorry…"

In a word of solace, Jesus confirmed to her in prayer: "Because of your steadfast love and faith in him, I have ordained you to be at his side to bring him to the font of all living water. For without your steadfast love and commitment he would dare not approach." Then, two weeks ago, her dream at last came true: her husband entered the Catholic Church, washed clean in the waters of Baptism, and fed the Bread of Salvation upon his tongue. He has stayed by her side ever since…

Yes, hers was a love that triumphed, for it was a love that went all the way… through the Garden, along the Way, to the Cross, into the Tomb… and was vindicated in a Resurrection.