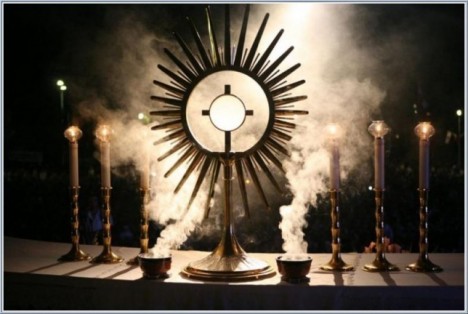 In another story, King Jehoshaphat and his people are going to be invaded by a foreign army. But the Lord speaks to them saying,

Do not fear or lose heart at the sight of the vast multitude, for the battle is not yours but God’s… Tomorrow go out to meet them, and the Lord will be with you. (2 Chron 20:15, 17)

What happens next is key.

After consulting with the people, he appointed some to sing to the LORD and some to praise the holy Appearance as it went forth at the head of the army. They sang: “Give thanks to the LORD, for his mercy endures forever.” At the moment they began their jubilant hymn, the LORD laid an ambush against the Ammonites, Moabites, and those of Mount Seir who were coming against Judah, so that they were vanquished. (v. 21-22; NAB; (Note: other translations read “the Lord” instead of “holy Appearance.”)

Again, it is the musicians who lead the people into battle—a battle where God sends the ambush, that is, His warring angels.

And when Joshua and the Israelites came to Jericho to take the city, they were lead by,

They circled the city for six days, and on the seventh, Joshua gave the command:

As the horns blew, the people began to shout. When they heard the signal horn, they raised a tremendous shout. The wall collapsed, and the people stormed the city in a frontal attack and took it. (v. 20)

In each of these stories, it is the sound of praise which brings the enemies strongholds tumbling down.

In Exorcism of the Dragon, I wrote how Mary is preparing us for a great battle for souls. That when Christ our Light grants this “illumination of conscience,” we will be sent to wield the sword of the Word of God. It will also be our praise and Adoration of Jesus in the “holy Appearance” of the Eucharist which will bring about an “ambush” of the enemy by St. Michael the Archangel and his cohorts. When Jesus reveals Himself in the Blessed Sacrament, there is going to be a tremendous new song that will go up in Adoration. In this song of praise, many will be set free from the demonic strongholds which hold them bound and chained. It will sound like a shout:

They cried out in a loud voice: “Salvation comes from our God, who is seated on the throne, and from the Lamb.” (Rev 7:10)

Again, in Revelation it says that this remnant “conquered [the accuser of the brothers] by the blood of the Lamb and by the word of their testimony.” Our testimony is really a song of praise, a praise of God’s intervention in our lives. And this is really what the Psalms are—David and the Israelite’s testimony.

These testimonies and songs of praise of the faithful, and their power to loose the chains of principalities and powers, are prophesied in Psalm 149:

Let the faithful rejoice in their glory, cry out for joy at their banquet, with the praise of God in their mouths, and a two-edged sword in their hands, to bring retribution on the nations, punishment on the peoples, to bind their kings with chains, shackle their nobles with irons, to execute the judgments decreed for them—such is the glory of all God’s faithful. Hallelujah! (Psalm 149:5-9)

What is the banquet? It is the wedding feast of the Lamb of Revelation which we participate in through the Sacrifice of the Mass and Adoration. The two-edged sword is the Word of God which will be spoken or sung—“the praise of God in their mouths”—which will execute the judgments decreed against the “kings” and “nobles,” who are symbols of demonic principalities and powers. The great and continuous worship of God permeating the book of Revelation will become more pronounced “on earth as it is in Heaven”, and the remnant’s singing of truth will set many free.

Then I looked and there was the Lamb standing on Mount Zion, and with him a hundred and forty-four thousand who had his name and his Father’s name written on their foreheads. I heard a sound from heaven like the sound of rushing water or a loud peal of thunder. The sound I heard was like that of harpists playing their harps. They were singing what seemed to be a new hymn before the throne, before the four living creatures and the elders… these are the ones who follow the Lamb wherever he goes. (Rev 14:1-4)

The Revelation of “what must soon take place,” the Apocalypse, is borne along by the songs of the heavenly liturgy but also by the intercession of the “witnesses” (martyrs). The prophets and the saints, all those who were slain on earth for their witness to Jesus, the vast throng of those who, having come through the great tribulation, have gone before us into the Kingdom, all sing the praise and glory of him who sits on the throne, and of the Lamb. In communion with them, the Church on earth also sings these songs with faith in the midst of trial. By means of petition and intercession, faith hopes against all hope and gives thanks to the “Father of lights,” from whom “every perfect gift” comes down. Thus faith is pure praise. —Catechism of the Catholic Church, n2642

A PERSONAL TESTIMONY: THE POWER OF PRAISE

Fifteen years ago, I began my ministry as a leader of Catholic praise and worship. At the time, I had been struggling with a particular sin for awhile and felt I was an utter slave to it.

One evening, I was on my way to attend a meeting with other music leaders. I felt utterly ashamed. I heard the accuser of the brothers whispering that I was a complete failure, a phony, a great disappointment to God and to anyone who knew me. I should not even be at this meeting.

One of the leaders handed out songsheets. I didn’t feel worthy to sing. But I knew enough as a worship leader that singing is an act of faith, and Jesus said, “faith the size of a mustard seed can move mountains.&q uot; So I decided to praise Him, for after all, we worship God because it is His due, not because it makes us feel good or because He needs His creatures praise or because we are worthy. Rather, it is for our benefit. Praise opens our hearts to God and the reality of who He is, and when we worship Him in that spirit of truth, He comes to us out of His great love. Praise draws God to us!

You are holy, enthroned on the praises of Israel… Draw near to God and he will draw near to you. (Psalm 22:3; James 4:8)

As the words rolled off my tongue, suddenly I felt as though electricity were coursing through my body. In my mind’s eye, it seemed as though I were being lifted on an elevator without doors into a room with a crystal glass floor (I read later on in Revelation that in God’s throne room there is a “sea of glass.”) All at once, I could feel my soul flooded with God. He was embracing me! He was loving me just as I was, all covered in the pig-slop of sin… much like the prodigal son… or Zacchaeus.

When I left the building that night, the power of that sin I had been struggling with for years was broken. I do not know how God did it. All I know, is that I was a slave before, and now I am free. He set me free!

And the sword which broke the chains was the song of praise.

On the lips of children and of babes you have found praise to foil your enemy, to silence the foe and the rebel. (Psalm 8:3)

While Paul and Silas were praying and singing hymns to God as the prisoners listened, there was suddenly such a severe earthquake that the foundations of the jail shook; all the doors flew open, and the chains of all were pulled loose. (Acts 16:25-26)