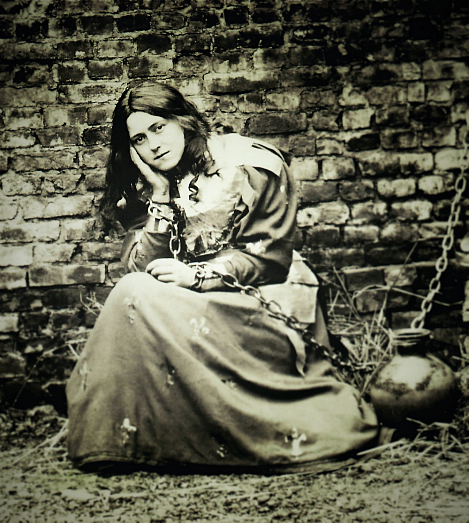 St. Thérèse of the Child Jesus

YOU know her for her roses and the simplicity of her spirituality. But fewer know her for the utter darkness she walked in before her death. Suffering from tuberculosis, St. Thérèse de Lisieux admitted that, if she didn’t have faith, she would have committed suicide. She said to her bedside nurse:

I am surprised that there aren’t more suicides among atheists. —as reported by Sister Marie of the Trinity; CatholicHousehold.com

At one point, St. Thérèse seemed to prophesy the temptations that would come that we are now experiencing in our generation—that of a “new atheism”:

Many of the new atheists today point toward St. Thérèse, Mother Teresa, etc. as proof that these were no great saints, but merely atheists in disguise. But they are missing the point (aside from having no comprehension of mystical theology): these saints did not commit suicide in their darkness, but, in fact, became icons of peace and joy, despite the purification they were going through. In fact, Thérèse testified:

Although Jesus is giving me no consolation, he is giving me a peace so great that it is doing me more good! —General Correspondence, Vol I, Fr. John Clarke; cf. Magnificat, September 2014, p. 34

God deprives the soul of feeling His presence so that the soul detaches itself more and more from itself and creatures, preparing it for union with Him while sustaining the soul with an interior peace “that surpasses all understanding.” [1]cf. Phil 4:7

This seeming “abandonment” by God is really not abandonment at all since the Lord never, ever leaves His Bride. But it remains nonetheless a painful “dark night of the soul.” [2]The terminology “dark night of the soul” was used by John of the Cross. Though he refers to it as an intense interior purification that precedes union with God, the phrase is often used loosely to refer to those difficult nights of suffering that we all experience.

At the beginning of my writing apostolate, as the Lord began to teach me about what was coming, I understood that the Church must now, as a body, pass through the “dark night of the soul”. That we are collectively going to enter a period of purgation in which, like Jesus on the Cross, we will feel as though the Father has abandoned us.

So what shall we do?

The answer is to lose yourself. It is to continue following the will of God in everything. When Archbishop Francis Xavier Nguyễn Văn Thuận was locked away for thirteen years in Communist prisons, he learned the “secret” of walking in the darkness of suffering and seeming abandonment.

Forgetting ourselves, we cast our whole being into what God asks of us in the present moment, in the neighbour he places before us, motivated only by love. Then, very often we will see our sufferings vanish as if by some magic, and only love remains in the soul. —Testimony of Hope, p. 93

Yes, this is what St. Thérèse meant by being “little.” But being little does not mean being a spiritual wimp. As Jesus says, we need, in fact, to be resolute:

No one who sets a hand to the plow and looks to what was left behind is fit for the Kingdom of God. (Luke 9:62)

No less than ordinary individual Catholics can survive, so ordinary Catholic families cannot survive. They have no choice. They must either be holy—which means sanctified—or they will disappear. The only Catholic families that will remain alive and thriving in the twenty-first century are the families of martyrs. —The Blessed Virgin and the Sanctification of the Family, Servant of God Fr. John A. Hardon, S.J.

So let us beg Jesus to give us the grace to be resolute, to not give up or cave into the “temptation to be normal”, to go along with the flow of the world and allow the lamp of our faith to become extinguished. These are the days of perseverance… but all of Heaven is on our side.