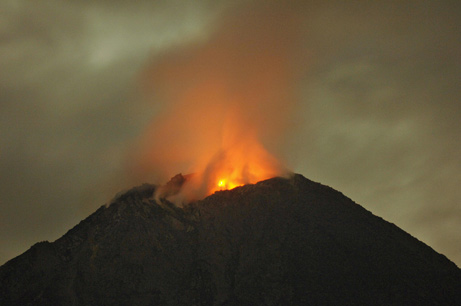 This writing first came to me on the Feast of Christ the King, November 24th, 2007. I feel the Lord urging me to repost this in preparation for my next webcast, which deals with a very difficult subject… a great shaking that is coming. Please keep your eye out for that webcast later this week. For those who have not watched the Prophecy at Rome series on EmbracingHope.tv, it is a summary of all my writings and my book, and an easy way to grasp the “big picture” according to the Early Church Fathers and our modern popes. It is also a clear word of love and warning to prepare…

I do not want to punish aching mankind, but I desire to heal it, pressing it to My Merciful Heart. I use punishment when they themselves force Me to do so… (Jesus, to St. Faustina, Diary, n. 1588)

The so-called “illumination of conscience” or “warning” may be drawing near. I have long felt that it may come in the midst of a great calamity if there is not a response of contrition for the sins of this generation; if there is not an end to the horrible evil of abortion; to the experimentation with human life in our “laboratories;” to the continuing deconstruction of marriage and the family—the foundation of society.  While the Holy Father continues to encourage us with encyclicals of love and hope, we should not fall into the error of presumption that the destruction of lives is insignificant.

I want to share the words of a soul who may be a prophet for our day. With all prophecy, it must be prayerfully discerned. But these words confirm what has been written on this website, and what the Lord is allegedly saying with urgency to many “prophets” today:

My people, the time of warning that has been foretold is soon to come to light. I have patiently pleaded with you, My people, yet too many of you continue to give yourselves to the ways of the world. Now is the time to take special heed to My words and embrace those in your families who are furthest away from Me. Now is the time to stand up and witness to them, for so many will be caught off guard. Welcome this time of persecution, for all who are mocked and persecuted for My sake will be rewarded in My kingdom.

This is a time when My faithful are being called to deep prayer. For in the blink of an eye you may be standing before Me. Do not rely on the things of man, rather, rely on the will of your Heavenly Father, for mans ways are not My ways and this world will be swiftly brought to its knees.

Amen! Amen, I say to you, for whoever takes heed to my words and lives for the kingdom will find the greatest reward with their Heavenly Father. Do not be like the foolish man who waits for the earth to begin to rock and tremble, for then you may perish… —Catholic seer, “Jennifer”; Words From Jesus, p. 183

David also prophesied of a time when the Lord would visit His people in the midst of a great trial:

Then the earth reeled and rocked; the mountains were shaken to their base: they reeled at his terrible anger. Smoke came forth from his nostrils and scorching fire from his mouth: coals were set ablaze from its heat.

He lowered the heavens and came down, a black cloud under his feet. He came enthroned on the cherubim, he flew on the wings of the wind. He made the darkness his covering, the dark waters of the clouds, his tent. A brightness shone out before him with hailstones and flashes of fire.

The Lord thundered in the heavens; the Most High let his voice be heard. (Psalm 18)

Christ is our King, a just king. His judgments are merciful because He loves us. But chastisements can be mitigated through prayer and fasting.  In an informal statement given to a group of German Catholics in 1980, Pope John Paul apparently spoke, not so much about a physical chastisement but spiritual, although the two cannot be separated:

We must be prepared to undergo great trials in the not-too-distant future; trials that will require us to give up even our lives, anda total gift of self to Christ and for Christ. Through your prayers and mine, it is possible to alleviate this tribulation, but it is no longer possible to avert it, because it is only in this way that the Church can be effectively renewed. How many times, indeed, has the renewal of the Church been effected in blood? This time, again, it will not be otherwise. —Regis Scanlon, Flood and Fire, Homiletic & Pastoral Review, April 1994

And let us not say that it is God who is punishing us in this way; on the contrary it is people themselves who are preparing their own punishment. In his kindness God warns us and calls us to the right path, while respecting the freedom he has given us; hence people are responsible. –Sr. Lucia, one of the Fatima visionaries, in a letter to the Holy Father, May 12th, 1982.

Let us enter into the deep prayer of the Bastion, especially in intercession for the many souls who remain asleep at this late hour. Let condemnation and judgment be far from us, and blessing and charity be near; let the temptation to call down justice upon our perceived enemies give way to compassion, sacrifice, and intercession on their behalf.

Do not despise the sinner for we are all guilty. If, for love of God, you rise up against him, mourn for him instead. Why do you despise him? Despise his sins but pray for him so that you may be like Christ, who did not get annoyed with sinners but prayed for them. Can’t you see how he wept over Jerusalem? For we, too, have been duped by the devil more than once. So why despise him whom the devil, who mocks us all, has deceived just like us? Why, O man, despise the sinner? Is it because he is not as just as you are yourself? But what happens to your justice from the moment you are without love? Why did you not weep for him? Instead, you persecute him. It is through ignorance that certain people get upset, believing themselves to have discernment into the deeds of sinners. —Saint Isaac the Syrian, 7th century monk