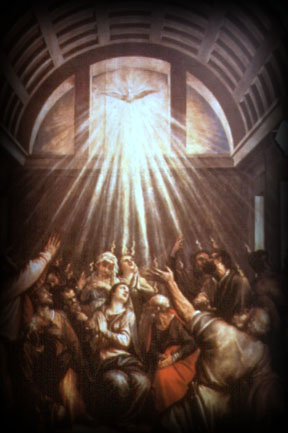 I have updated this writing which I first published October 19th, 2007:

I HAVE written often that we need to stay awake, to watch and pray, unlike the slumbering apostles in the Garden of Gethsemane. How critical this vigilance has become! Perhaps many of you feel a great fear that you are either asleep, or perhaps that you will fall asleep, or that you will even run from the Garden!

But there is one crucial difference between the apostles of today, and the Apostles of the Garden: Pentecost. Before Pentecost, the Apostles were fearful men, full of doubt, denial, and timidity. But after Pentecost, they were transformed. Suddenly, these once ineffectual men burst into the streets of Jerusalem before their persecutors, preaching the Gospel without compromise! The difference?

FILLED WITH THE SPIRIT

You who have been baptized have received the same Spirit. But many have never experienced a release of the Holy Spirit in their lives. This is what Confirmation is, or should be: a completion of Baptism and a new anointing of the Holy Spirit. But even then, many souls have either not been catechized properly on the Spirit, or were confirmed because it was “the thing to do.”

This catechesis is the great work of the “Charismatic Renewal” which has been embraced and promoted by the Holy Fathers of the past century, the current Pope included. It has facilitated the release of the Holy Spirit in many believer’s lives, enabling that same power of Pentecost to transform them, melting their fears, and empowering their lives with the charisms of the Holy Spirit intended for the building up of the Body of Christ.

It is far past the day for fellow Catholics to continue labeling one another as “charismatic” or “marian” or “this or that.” To be Catholic is to embrace the full spectrum of truth. It does not mean we have to express our prayer like each other—there are a thousand ways to the Way. But we must embrace all that Jesus has revealed for our benefit—all the armor, weapons, and graces we need to engage the Great Battle the Church is entering into.

There are furthermore special graces also called charisms after the Greek term used by St. Paul and meaning “favor,” “gratuitous gift,” “benefit.” Whatever their character—sometimes it is extraordinary, such as the gift of miracles or of tongues—charisms are oriented toward sanctifying grace and are intended for the common good of the Church. They are at the service of charity which builds up the Church. —Catechism of the Catholic Church, n. 2003

Witnesses testify to the fact that Pope John Paul II spoke in tongues. These are not gifts for the fanatical, but those willing to be radical!

In the book of Acts, the Apostles were filled with the Spirit, not just once at Pentecost, but many times (see Acts 4:8 and 4:31 for example.) It was and is what St. Thomas Aquinas called an “invisible sending” of the Spirit whereby dormant or latent charisms of the Spirit are “stirred” up:

After this invisible sending, I have personally witnessed many souls transformed. Suddenly they have a deepened love and desire for God, a hunger for his Word, and a zeal for His Kingdom. Often, there is a release of charisms which enable them to become powerful witnesses.

PRAYER OF THE UPPER ROOM

The Church finds herself once again in the upper room of the heart with Mary. We are waiting in the Bastion for the Spirit to come, and the waiting is almost over. Join the hand of Mary in the holy Rosary. Pray for a new Pentecost in your life. The Spirit is coming to overshadow the Woman-Church! Do not be afraid, for it is just this grace which will empower you to be His witness in the face of your persecutors.

The Holy Spirit, finding his dear Spouse present again in souls, will come down into them with great power. He will fill them with his gifts, especially wisdom, by which they will produce wonders of grace… that age of Mary, when many souls, chosen by Mary and given her by the the most High God, will hide themselves completely in the depths of her soul, becoming living copies of her, loving and glorifying Jesus.  —St. Louis de Montfort, True Devotion to the Blessed Virgin, n.217, Montfort Publications

Why did twelve fishermen convert the world, and why are half a billion Christians unable to repeat the feat?  The Spirit makes the difference. —Dr. Peter Kreeft, Fundamentals of the Faith

Pray for the Day of Difference. For what a difference a day can make…

THE VOICE OF THE CHURCH

We ought to pray to and invoke the Holy Spirit, for each one of us greatly needs His protection and His help. The more a man is deficient in wisdom, weak in strength, borne down with trouble, prone to sin, so ought he the more to fly to Him who is the never-ceasing fount of light, strength, consolation, and holiness.  —POPE LEO XIII, Encyclical Divinum illud munus, 9 May 1897, Section 11

O Holy Spirit, renew your wonders in this our day, as by a new Pentecost. —POPE JOHN XXIII at the opening of the Second Vatican Council

It will be very fortuitous for our times, for our brothers, that there should be a generation, your generation of young people who shout out to the world the glory and the greatness of the God of Pentecost…. Jesus is Lord, hallelujah! —POPE PAUL VI, spontaneous comments, October 1973

The fresh breath of the Spirit, too, has come to awaken latent energies within the Church, to stir up dormant charisms, and to infuse a sense of vitality and joy. —POPE PAUL VI, A New Pentecost by Cardinal Suenens

Be open to Christ, welcome the Spirit, so that a new Pentecost may take place in every community!  A new human ity, a joyful one, will arise from your midst; you will experience again the saving power of the Lord.  —POPE JOHN PAUL II, in Latin America, 1992

…[a] new springtime of Christian life will be revealed by the Great Jubilee if Christians are docile to the action of the Holy Spirit… —POPE JOHN PAUL II, Tertio Millennio Adveniente, n. 18

I am really a friend of movements—Communione e Liberazione, Focolare, and the Charismatic Renewal.  I think this is a sign of the Springtime and of the presence of the Holy Spirit. —Cardinal Ratzinger (POPE BENEDICT XVI), Interview with Raymond Arroyo, EWTN, The World Over, September 5th, 2003

…let us implore from God the grace of a new Pentecost… May tongues of fire, combining burning love of God and neighbor with zeal for the spread of Christ’s Kingdom, descend on all present! —POPE BENEDICT XVI,  Homily, New York City, April 19th, 2008

…this grace of Pentecost, known as Baptism in the Holy Spirit, does not belong to any particular movement but to the whole Church… being fully baptized in the Holy Spirit is part of the public, liturgical life of the Church. —Bishop Sam G. Jacobs, Introductory Letter, Fanning the Flame

I will try to fan into flame the spark of divine love that is hidden within you, as far as I am able through the power of the Holy Spirit. —St. Basil the Great, Liturgy of the Hours, Vol. III, pg. 59