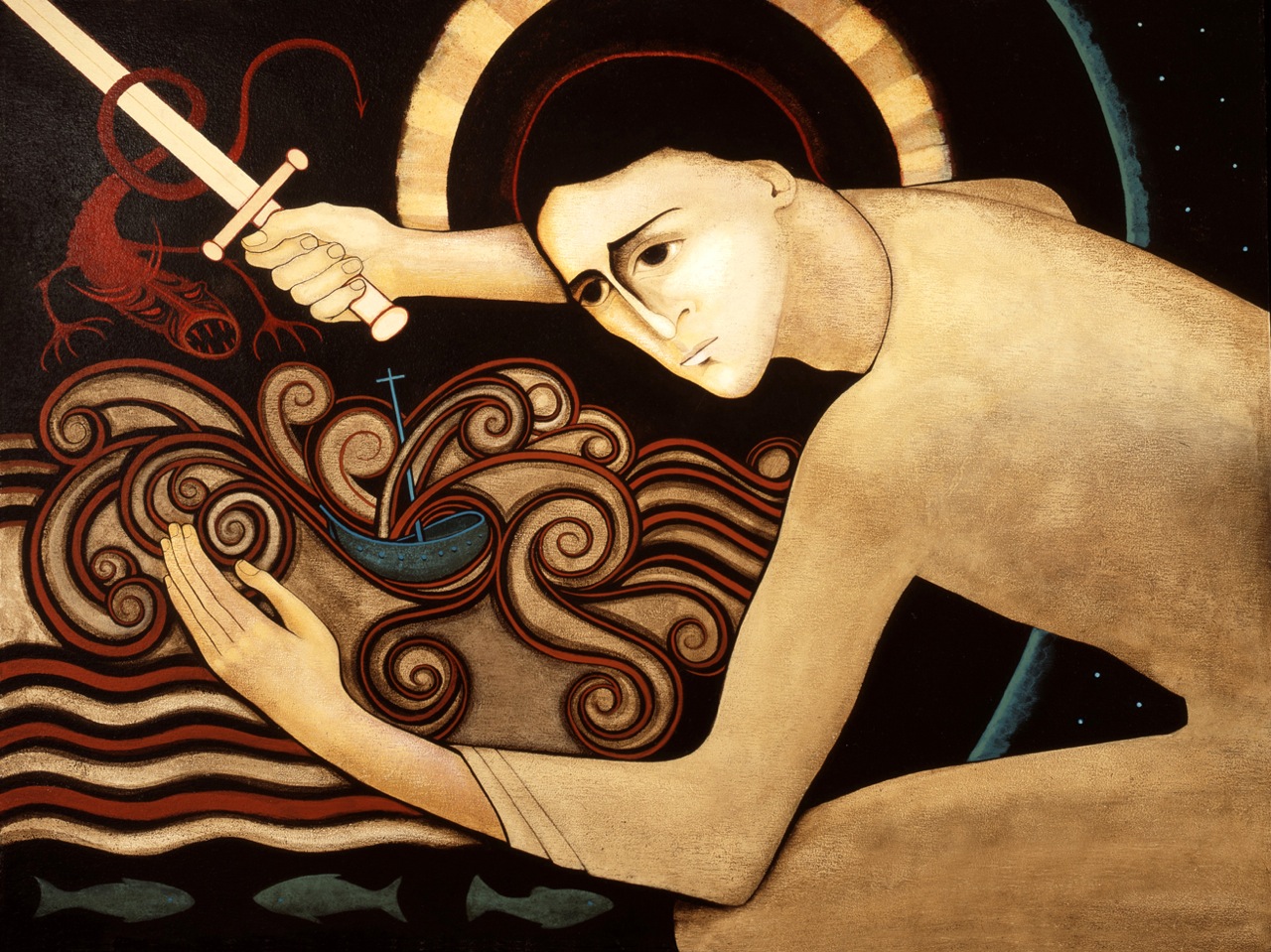 FEAST OF THE EPIPHANY

I HAVE been writing you consistently now, dear friends, for about three years. The writings called The Petals formed the foundation; the Trumpets of Warning! followed to expand those thoughts, with several other writings to fill the gaps in between; The Seven Year Trial series is essentially a correlation of the above writings according to the Church’s teaching that the Body will follow its Head in its own Passion.

On the past Feast of the Epiphany in 2008, I had somewhat of an “epiphany” myself as all these writings suddenly came into focus. They were laid out before me clearly, in a finer chronology. I waited for a confirmation from the Lord, which He provided in several ways—the primary one being the spiritual director of these writings.

On the feast of Mary, Mother of God last year, I had also received another word, that 2008 would be the Year of the Unfolding. Not that everything would unfold at once, but that there would be definitive beginnings. Indeed, shortly after, we began to see headlines of The Perfect Storm gathering in the economy, the food supply, and other areas of society. Now, the end of 2008 has been punctuated by a grave crisis in the Middle East, some of the meanest winter weather on record in various areas, and 2009 has begun with severe earthquakes in Asia. Also notable is the administration change in the United States toward a socialist agenda by a young politician no one knows much about—a man also determined to make abortion unrestricted in his country. More than that, the new presidency, combined with a global economic crisis, appears to be paving the way towards a New World Order. At least, this is the language being used by heads of state across the world…

How can we fail to see that man is beginning to reap what he has sown: a civilization which rather than embracing the wisdom of God’s order, is embracing a culture of death and all its unforeseen consequences?

As I lay out these details below, I will link certain words to the pertinent writings on this website. This was first published on January 9th, 2008. I have updated the Afterword, adding a vision from Blessed Anna-Katharyn Emmerich, a 19th century nun who bore the stigmata.

As you read, keep in mind that it comes from this poor man, and that nothing is written in stone when it comes to the fluid mercy of God. For the most part, though, the events described here flow in sync with the writings of the Early Church Fathers and Sacred Scripture—the sources that really matter.

We have been receiving warnings from Heaven of chastisements for a number of decades now. Our Blessed Mother has been standing in the gap between Heaven and Earth, becoming herself the highway upon which the Mercy of God has been poured out on mankind. But in the past two years in particular, many messengers have been raised up to speak a simple word to the Church and the world: “Prepare!”

I believe there are coming disasters of serious proportions which are for the most part man-made. They are the result of our flagrant abuse of nature and disregard for the natural and moral law. It is worth quoting once more the candid words of Sr. Lucia, one of the Fatima visionaries who recently passed away:

And let us not say that it is God who is punishing us in this way; on the contrary it is people themselves who are preparing their own punishment. In his kindness God warns us and calls us to the right path, while respecting the freedom he has given us; hence people are responsible. —Letter to the Holy Father, 12 May 1982.

It is these trials which will produce “exiles” depending on where one lives, due to the disasters themselves, through war, and the ensuing outbreak of disease and famine.

THE FALL OF BABLYON

These disasters will help to precipitate the collapse of the world economy, which as we see in the headlines, is already swaying like a great cedar in a hurricane. Yes, the winds of change are howling! The present economic/political systems, in part, represent “Babylon,” the biblical city symbolic of materialism, greed, and sensuality. This is why my writings have repeatedly called for souls to “come out of Babylon,” to come out of the mode of thinking, doing, and acting which has driven even portions of the Church into material slavery and worldly reasoning. For Babylon is about to collapse, and the degree to which one is intertwined in it, is the degree to which one will experience the fallout.

THE ILLUMINATION OF CONSCIENCE

While the coming trials will certainly do much to unmask the idols and illusions which humanity is chasing after, there is coming a divine moment in which God is going to reveal His presence to the world. My sense is that this moment of illumination is going to come in or as the eye of the storm. At that time, every soul will see his soul as God sees it—a great gift of mercy for many which will precipitate a brief period of evangelization in the world. It is this time for which the remnant Church has been prepared, and for which it now waits in The Bastion—that upper room of prayer, fasting, and vigilance. This is part of the plan for the triumph of Mary’s Immaculate Heart.

Though the illumination of conscience will bring about a time of revival, I believe it may also be countered by the False Prophet spoken of by St. John in his Apocalypse. Already, the restrainer has been lifted (not removed, but lifted), and God has permitted a deluge of false prophets to inundate our times. They are precursors, preparing the ground for the False Prophet (Rev 13:11-18).

This False Prophet will counter the miracles of the Illumination and The Great Sign left by Our Blessed Mother with his own prodigies (possibly attempting to prove how Our Mother’s apparitions were his own doing all along!) He will point toward a new economic system and form of world governance and religion which will have an irresistible appeal, and, to a certain degree, satisfy the longings and desires of this current generation. This will bring The Great Apostasy to a definitive stage, precipitating a major world climax in loss of faith, as many will be deceived by false signs and wonders and a false unity proposed by the False Prophet.

Christians will have been and will continue to form “parallel communities“—parallel to the communities of false light being formed by the spirit of Antichrist. Because of the miraculous manifestations of Christ and His Mother, there will be a unity of Christians centered on the Eucharist.

These communities will exist for a time, living a greatly simplified lifestyle. But soon, the power and graces flowing from the remnant Church—but especially the Eucharist—will draw out a formal persecution against Her. Christians will be seen as the “new terrorists” standing in the way of a new age of peace and harmony because of their moral stands, particularly on marriage and sexuality. They will be cut off from society at large, unable to buy or sell without the necessary “mark.”

There will come a painful moment when the Holy Father will be driven into exile and killed, creating “spiritual exiles” and great confusion, bringing the Apostasy to its climax.

It is during this period of persecution that we may see the appearance of the Lawless One, as God completely removes the restrainer (see 2 Thess 2:3-8 ). This Antichrist, who had been quietly operating behind the scenes (and the False Prophet), will attack the “Source and Summit” of the Church, the Holy Eucharist, and all His followers. For great miracles will have been flowing from the Eucharist since the Illumination as the age of ministries ends and the new wine of ministry flows through the Body of Christ. The enemy will attempt to abolish the daily sacrifice, the Holy Mass… an eclipse of the Son. There will be many martyrs.

RESTORATION OF PEACE AND JUSTICE

But Jesus will come to destroy the Lawless One with the breath of His mouth and all those who followed the Antichrist. The Beast and the False Prophet will be cast into the lake of fire, and Satan will be chained for a “thousand years.” The earth will be cleansed and there will occur what St. John calls the “first resurrection,” as the martyrs and saints rise, and with the surviving remnant, reign with Christ in His Sacramental presence for a symbolic period of a thousand years. This Era of Peace will be the vindication of Wisdom; it will be a time when the Gospel will reach to the very ends of the earth; when all nations will stream toward Jerusalem, bowing before Christ’s Eucharistic Presence; when the Church will be purified and prepared to receive Him when He returns in glory to judge the dead, placing all enemies beneath His feet, the last, being death itself.

This final return of Christ is preceded, say the Scriptures, by the release of Satan from his prison with one last attempt to deceive the nations through Gog and Magog in a final satanic uprising.

If this all seems too fantastic to our minds, that’s because in some ways, it is. It is first and foremost a spiritual battle—something our minds cannot comprehend. Secondly, it is hard to imagine that our lives and lifestyles could possibly change. But they can, and I believe they will for this generation.

However, once again, God’s timing is beyond human reckoning. How long it will take for these things to unfold is known by God alone. Our response should be what it always should be: a committed life of prayer, simplicity, and detachment in a spirit of poverty, humility, and love. Especially love, inebriated with the joy of knowing and serving Jesus! We should continue to live in the present moment, living to love and serve God and neighbour. It’s that simple.

In the meantime, we watch and pray, heeding all the things the Lord has foretold us in the Scriptures.

I have said all this to you to keep you from falling away… (John 16:1)

I see more martyrs, not now but in the future. I saw the secret sect (Masonry) relentlessly undermining the great Church. Near them I saw a horrible beast coming up from the sea. All over the world, good and devout people, especially the clergy, were harassed, oppressed, and put into prison. I had the feeling they would become martyrs one day.

When the Church had been for the most part destroyed by the secret sect, and when only the sanctuary and altar were still standing, I saw the wreckers enter the Church with the Beast. There, they met a woman of noble carriage who seemed to be with child, because she walked slowly. At this sight, the enemies were terrorized, and the Beast could not take but another stop forward. It projected its neck towards the Woman as if to devour her, but the Woman turned about and bowed down (towards the Altar), her head touching the ground. Thereupon I saw the Beast taking to flight towards the sea again and the enemies were fleeing in the greatest confusion. Then, I saw in the distance great legions approaching. In the foreground I saw a man on a white horse. Prisoners were set free and joined them. All the enemies were pursued. Then, I saw that the Church was being promptly rebuilt, and she was more magnificent than ever before.—Blessed Anna-Katharina Emmerich, May 13th, 1820; excerpted from Hope of the Wicked by Ted Flynn. p.156