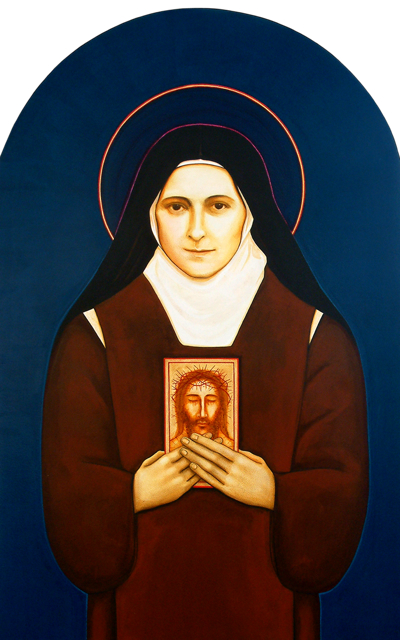 I wrote this meditation after visiting the house of St. Thérèse in France seven years ago. It is a reminder and warning to the “new architects” of our times that a house built without God is a house doomed to collapse, as we hear in today’s Gospel….

AS our vehicle traversed the French countryside this week, the words of John Paul II rolled through my mind like the hills surrounding Liseux, the “home” of St. Thérèse to which we were headed:

These words came on the heels of having visited some of the most fantastic cathedrals in all of Christendom, such as the one in Chartres, France. In that massive Gothic church, I was overwhelmed with the incredible faith and zeal that could have possibly created such a testament to the splendor of God—an outward expression of the inner life of France… an interior faith and love that has produced a litany of Saints. Yet, at the same time, I was struck with a terrible sorrow and wonderment: How, I asked over and over, could we in the Western nations 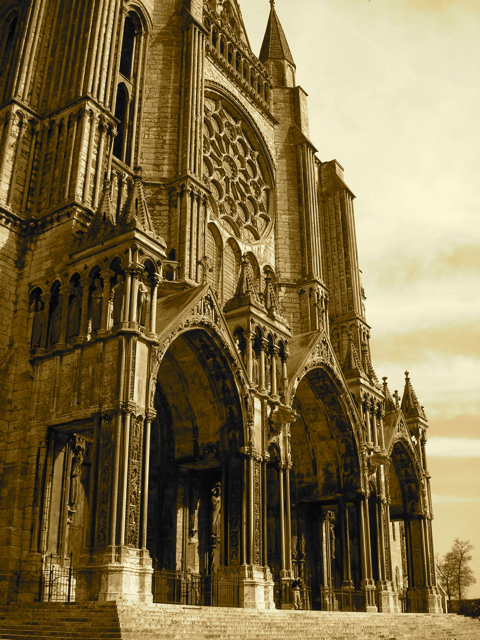 go from creating such glorious structures, stained glass windows, and sacred art… to abandoning and closing our churches, destroying our statues and crucifixes, and extinguishing much of the mystery of God in our prayer and liturgy? The answer came silently, as I could see with the eyes of my soul how this beauty, while at once inspiring saints, also corrupted men who bent the awe and power of our Catholic heritage to their own advantage. I understood at once that the Catholic Church, despite her holiness and providential role in the plan of salvation, has experienced in her long history the rise and fall of many Judases. They have welcomed her Joan of Arcs, and also burned them at the stake.

Today, once again, Mother Church is bent over in the Garden of her own Gethsemane. The torches have been lit, as the kiss of Judas is being carried in the wind toward the winding path of the Church’s own Passion. This time, it is not in just one or two regions or nations, but now globally. Hence, everywhere we turn in this European countryside, we see the footprints of a Mother, a Woman clothed with the sun who has been appearing to prepare her children for this time…

THE SAME, YESTERDAY, TODAY, AND FOREVER

But back to the main thought on holiness. Christ’s Gospel has never changed. That, which He asks of us now, He has asked throughout all the centuries, whether they were the crude beginnings of Christendom, the middle ages, or our modern times: that His people—popes, cardinals, bishops, priests, religious, laymen—be as little children. When souls begin to lose this vision, the flock whom they lead—whether it’s their own children, or the spiritual children of an entire church—begin to scatter in confusion and darkness.

So they were scattered for lack of a shepherd, and became food for all the wild beasts. (Ezekiel 34:5)

And so I speak for a moment in our times, especially to our theologians, for many have lost the meaning and purpose of their science. Theology has been used as a license to invent and recreate God in the image of modern man. Rather than superimpose the Gospel upon our times, many theologians have attempted to superimpose our times upon the Gospel. The fruit of this spiritual anarchy is everywhere, including here in France: the young have virtually disappeared from the pews, and hedonism abounds as truth has become relative… and sometimes the pure imagination of so-called theologians.

Whoever does not accept the kingdom of God like a child will not enter it. (Luke 18:17)

This foundation is not some kind of kindergarten. It is not a beginner spirituality we graduate from into the more intellectual, philosophical, and theological schools. No, a spirit of abandonment is the very lifelong locus of the soul. It is the place where the will meets Divine grace, where fuel meets Fire, where transformation and growth occur. It is in fact in this very state of littleness that the soul begins to truly “see”; where divine wisdom is revealed, and supernatural lights are given that can guide entire nations and peoples.

After praying at the tomb of the Little Flower, a doctor of the Church, the thoughts continued.

Upon this foundation of humility and childlike trust, the walls are constructed. What are these walls? They are holiness of life. Now, few people would drive by a new home construction and be impressed with a wooden frame. It’s not until the inner and outer walls are painted and finished that the eye is drawn to its beauty (or lack thereof). The house God wishes to build indeed has solid frames, that is, the Sacred Tradition and teachings of our faith. It includes the crossbeams of canons and support frames of encyclicals, apostolic letters, and dogmas, all supernaturally bound together with the solid nails of the Sacraments. But today, many have turned the walls inside out! It’s as if many quarters of the Church are possessed by a spirit of intellectualism and a business-mind set, as if the priesthood were a 9-5 job, and our Faith merely a collection of religious tenets (which can be tinkered with). The Church is often seen as an institution whose beauty is missed because the color and appearance of holiness is hidden or nonexistent in many Catholic’s lives. Furthermore, many theologians and shepherds have introduced strange and foreign building materials and attempted to cover the existing framework with odd shapes, warped architecture, and false fronts. The Church in many places today appears barely recognizable because “the truth which sets us free” has been disfigured.

What the Lord truly desires is that his theologians help His people better understand the truth and beauty infinitely bound in His indestructible “deposit of faith” so that souls may find the power of the Gospel through new expressions which remain rooted in the true faith.

As the sun set, and the lights of the basilica built in Thérèse’s honor disappeared behind sprawling towers and ancient silhouettes, I saw that the roof of this house of holiness is obedience: obedience to Christ’s Gospel, obedience to His holy Apostles and their successors, obedience to the duties and obligations of our state in life, and obedience to the divine inspirations that the Holy Spirit whispers to the listening soul. Without this roof, the virtues are exposed to the elements of worldliness and quickly fade and disintegrate, distorting and disfiguring the framework of truth (which, without obedience becomes subjective). Obedience is the roof that shields the soul in the trials and temptations which so frequently beat down upon the heart in the storms of life. Obedience is that force which rests upon the foundations, binding the spiritual life together, and pointing the peak of the heart toward Heaven. Obedience to the Magisterium is a criterium that seems to have escaped many today, and as a result, the house is falling in.

THE HOUR OF THE LAY FAITHFUL

With the Second Vatican Council, John Paul II said that “the hour of the laity truly struck.” We see this more evidently than ever as many of our shepherds and teachers, our theologians and pastors, have mistaken the framework for the walls, and in some cases, left out the roof altogether. As such, St. Thérèse becomes for our times a reference point for the end of our era. In her bedroom, there was a statue of St. Joan of Arc. She was a 17 year old girl who led the French armies against the oppression of the English. Yet she was without skill or military strategy. It was her simple obedience, childlike faith, and virtue which God worked through to accomplish His plan, and liberate a people in darkness. St. Thérèse also became a knight of God, not for any theological treatises or summas of philosophy she had written, but for a heart that, not unlike the Blessed Mother, gave a constant fiat to her Lord. It has become a beacon in itself, shining a way to Christ even in this dark hour.

As a shepherd tends his flock when he finds himself among his scattered sheep, so will I tend my sheep. I will rescue them from every place where they were scattered when it was cloudy and dark. (Ezekiel 34:12)

Childlike abandonment. Holiness of life. Obedience. This is the only House that has ever stood throughout the centuries. All the rest will crumble, no matter how glorious and splendid, clever or intellectual they appear to be. It is the house the Lord is building now in the souls of those who, like St. Thérèse, are laying a foundation of childlike trust. For this “Little Way” is soon to become The Way of the Church as she enters her own Passion, only to be raised again—not as a world superpower or political ruler—but as a Cathedral of true holiness, healing, and hope.

Unless the LORD build the house, they labor in vain who build. (Psalm 127:1)

In today’s readings, it is abundantly clear: the house or nation built on disobedience to God’s laws is subject to collapse—whether it comes from the invasion of foreign nations, or from its own corrupt men and women who, like termites, destroy the framework of righteousness from within. Nations and civilizations may collapse—but the one’s who build their house on rock will stand, even if they are but a remnant in the rubble.

And everyone who listens to these words of mine but does not act on them will be like a fool who built his house on sand. The rain fell, the floods came, and the winds blew and buffeted the house. And it collapsed and was completely ruined. (Today’s Gospel)