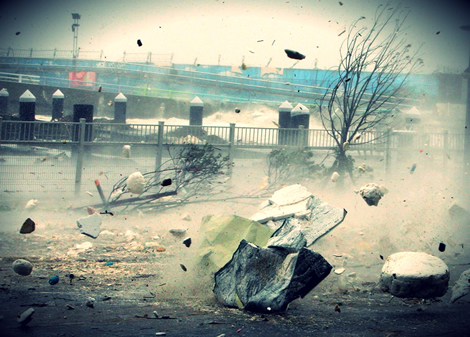 WHAT would it be like to stand in the winds of a hurricane as the eye of the storm approached? According to those who have been through it, there is a constant roar, debris and dust are flying everywhere, and you can barely keep your eyes open; it is hard to stand straight and keep one’s balance, and there is fear of the unknown, of what the storm could bring next in all the chaos.

I have been warning for years now that a Storm is coming like a hurricane, [1]cf. Seven Seals of Revolution; cf. Persecution!… A Moral Tsunami And those first winds have arrived that will change our lives and the world forever. Even now, the roar of revolution is rising; even now, the fallout from radical social experiments in a society “unrestrained” are flying all about us as the dust of “change” stings the eyes (and heart) and temptation tries to push us over. And a spirit of fear has been unleashed [2]cf. Hell Unleashed to pull us from our Refuge, which is the Hearts of Jesus and Mary.

And yet, in all this I find a strange comfort. Because nothing is occurring that Our Lord and Our Lady have not prepared us for through the Scriptures, papal warnings, [3]cf. Why Aren’t the Popes Shouting? and countless apparitions and messages. The crisis beginning to envelop the Church, the apostasy of millions of Catholics, the anti-gospel revolution of Western leaders and nations, the extreme shifts in nature and the earth’s crust… all of it has been foretold and foreseen.

Each one of us should look into the mirror, take a deep breath and say, “You were born for these days, and so you will have grace for these days.” And Jesus, The Keeper of the Storm, replies: I have told you this so that you may not fall away.

Beware of false prophets, who come to you in sheep’s clothing, but underneath are ravenous wolves. (Yesterday’s Gospel)

The new messianists of our time are not lacking, men and women who believe that a world without God is not only possible, but desirable. A world in which all are equal without distinction, the notion of sin (and hence, conscience) is dispensed with, and any and all things that create “boundaries”—whether they are religious precepts, national borders, biological sex, foreign currencies, etc.—are done away with in order to produce a “unity” of all peoples. Of course, what Satan is trying to produce is a counterfeit unity [4]cf. The Coming Counterfeit that rejects diversity and draws everyone into the “sole thought”. But this is not unity at all, but enforced conformity. [5]cf. The False Unity and The False Unity – Part II  Like cattle, we are being herded into this emerging global governance that is no longer a “conspiracy theory”, but the express will and policy of world leaders working alongside the United Nations’ Agenda 2030. If the peoples vote against globalism, as they did in the United Kingdom this week, the “Beast” will find another way to consolidate nations: via the The Seven Seals of Revolution. Sheep always want to be led when the wolves of disaster threaten their existence (and they get the leader they deserve).

In reality, God has delivered this generation to its own desires, much like the prodigal son was “released” by his father. The boy was “unrestrained” to carry out his disordered desires, just as “the restrainer” has now been removed from this generation [6]cf. Removing the Restrainer that is set upon making death the solution to all our problems [7]cf. The Great Culling — whether it is of the unborn, sick, aged, or suffering of any kind. [8]cf. The Judas Prophecy And perhaps soon, those who seek to “eliminate” Christians will indeed think they are offering proper worship to the State by eradicating, one way or another, those religious men and women who are so-called “terrorists” of the peace, enemies of “tolerance” and obstacles to “equality.”

Again, all this has been foretold. I sensed the Lord say several years ago that these days were coming at us “like a freight train.” And now they are here, unfolding with the speed and violence of the winds of a hurricane. Having carefully, daily, and even hourly watched the signs of the times for the past decade, even I can barely keep up now to the ferocity and speed of this Storm, whose damaging winds are beginning to be felt in the West. Soon, one event after another will hurl itself upon us… like one freight car after another piling up in the inevitable wreck that occurs when the Divine Engineer is ejected from the public sphere.

But so too will come the victories and powerful interventions of Heaven that have likewise been foretold, which are going to shake this world and ultimately bring to ruin the pride and idolatry—Babylon—that seeks to destroy Christ’s Church. [9]cf. The Fall of Mystery Babylon I am thinking of the many souls in various places of the world who have been confided “secrets” from Heaven that will be announced as warnings and signs that God exists. In reality, it is Satan and his empty kingdom that will be crushed.

In the recently approved apparitions from San Nicolas, Argentina, Our Lady said:

God’s warning is over the world. Those who stay in the Lord have nothing to fear, but those who deny what comes from him do. Two-thirds of the world is lost and the other part must pray and make reparation for the Lord to take pity. The devil wants to have full domination over the earth. He wants to destroy. The earth is in great danger… At these moments all humanity is hanging by a thread. If the thread breaks, many will be those who do not reach salvation. That is why I call you to reflection. Hurry because time is running out; there will be no room for those who delay in coming!… The weapon that has the greatest influence on evil is to say the Rosary…

But reminding us that these times are also like the birth pangs prophesied in Scrip
ture—the suffering of the Church that will give way to a new dawn—Mary continues:

A new time has begun. A new hope has born; attach yourselves to this hope. The very intense light of Christ is going to be reborn, for just as on Calvary, after Crucifixion and death, the Resurrection took place, the Church too will be born again through the strength of love. —message to Gladys Herminia Quiroga; approved on May 22nd, 2016 by Bishop Hector Sabatino Cardelli

“Those who stay in the Lord have nothing to fear,” Our Lady says. Brothers and sisters, there have been times when I have been overwhelmed when I see that, everything that the Lord and Our Lady have given me to warn about in the past 10 years, is now coming about, just as they said. I have been tempted to great fear too, especially being on the front lines and the father and provider of eight children. But then, God has permitted me moments when great light and peace have enveloped my soul, and suddenly all those fears vanish, and the enemy seems as large to me as an ant. In those minutes, the courage, power, and grace I feel in my soul is incredible. But then, the Lord “lifts” this grace, and I feel the gravity of my human weakness all over again. It is as if to say, “You will receive these graces when you need them, and no sooner. For now, you will remain in Gethsemane where you must abandon yourself to Me in complete and total trust and faith.”

And so, I repeat to you dear brothers and sisters The Great Antidote to the spirit of antichrist, to the fear and evil that has been unleashed in our times. It is simply this: Be faithful.

…he protects the souls of the faithful, rescues them from the hand of the wicked. (Ps 97:10)

In childlike faith and obedience is the grace to crush the head of the serpent.

I am taking a much needed retreat with my family this week. I have written Part II to that short story called That Pope Francis! and hope to publish it soon. Thank you for your prayers.

Remember, you are loved.