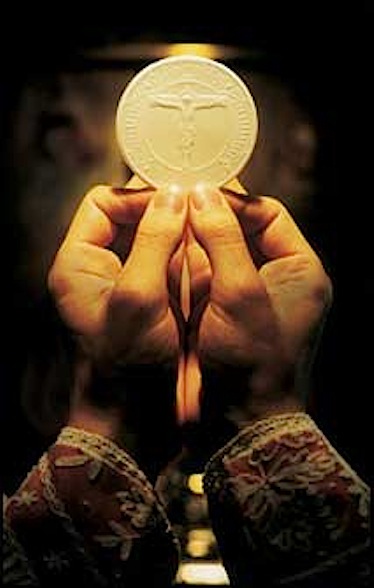 The subject of this writing is of a genuine coming “reign” or “era” of peace and justice, also understood by some as a “temporal kingdom” on earth. I want to explain even more clearly why this is not another modified form of the heresy Millenarianism so that the reader can feel free to embrace what I believe to be a vision of great hope anticipated by several pontiffs.

In the Gospel of Luke, Jesus—speaking this time without parable—makes the nature of the Kingdom of God plain.

Clearly, the Kingdom of God is spiritual in nature. St. Paul expresses that it is not a matter of carnal banquets and feasting in this temporal world:

For the Kingdom of God is not a matter of food and drink, but of righteousness, peace, and joy in the Holy Spirit (Rom 14:17)

Neither is the Kingdom of God a political ideology:

It is “among you,” Jesus said. It is to be found in the union of His believers—a union in faith, hope, and charity that is a foretaste of the eternal Kingdom.

The Church “is the Reign of Christ already present in mystery.” —CCC, n. 763

The Kingdom… would be the work of the Holy Spirit; it would belong to the poor according to the Spirit… —CCC, 709

This spiritual unity of Christians flows into and from its source: the Holy Eucharist. Through the power of the Holy Spirit, the elements of bread and wine are transformed into the Body and Blood of Christ. Through the reception of the Holy Eucharist the Church is made one Body in Christ (1 Cor 10:17). Thus, one could say that the Kingdom of God is contained in, and flows from the Holy Eucharist, albeit not in its fullest expression of power, glory, and eternal dimensions. Jesus prophesies that this unity of believers is what will at last bend the world’s knees in understanding, worship, and acknowledgment that He is Lord:

Thus, the Era of Peace will be also be the universal reign of the Eucharist, that is, the reign of the Sacred Heart of Jesus. His Eucharistic Heart will be established as the throne of grace and mercy which will transform the world as the nations come to worship Him, receive His teaching through the Catholic Faith, and live it in their lands:

When the struggle is ended, the ruin complete, and they have done with trampling the land, a throne shall be set up in mercy… The warrior’s bow shall be banished, and he shall proclaim peace to the nations. His dominion shall be from sea to sea, and from the River to the ends of the earth. (Isaiah 16:4-5; Zech 9:10)

The Era of Peace will transform society to such a degree, according to some pontiffs and 20th century mystics, that this period of justice and peace will rightly be called a “temporal kingdom” since, for a time, all will live by the rule of the Gospel.

TRIUMPH OF THE IMMACULATE HEART

At last, the prayer of Christ for unity, and the prayer He taught us to address to our Father will reach its fulfillment within the boundaries of time: “thy kingdom come, thy will be done on earth as it is in Heaven.” That is, with Satan bound in chains (Rev 20:2-3), and wickedness cleansed from the earth (Psalm 37:10; Amos 9:8-11; Rev 19:20-21), and the saints extending the priesthood of Christ to the ends of the earth (Rev 20:6; Matt 24:24), the fiat of the Woman-Mary will reach its climax in the fiat of the Woman-Church. This is the Triumph of the Immaculate Heart of Mary: to bring to birth the People of God—both Jew and Gentile—under the banner of the Cross so as to live the perfect will of the Father in a period of unparalleled sanctity.

Yes, we adore you, Lord, lifted up upon the Cross between heaven and earth, the sole Mediator of our salvation. Your Cross is the banner of our victory! We adore you, Son of the Most Holy Virgin who stands unbowed beside your Cross, courageously sharing in your redeeming sacrifice. —POPE JOHN PAUL II, Way of the Cross at the Colosseum, Good Friday, 29 March 2002

This birthing, this new era, will be brought forth out of the labor pains of the Church’s own Passion, her own “way of the Cross.”

Today I would like to entrust the Lenten journey of the whole Church to the Blessed Virgin. I would particularly like to entrust the efforts of young people to her, so that they will always be ready to welcome the Cross of Christ. The sign of our salvation and the banner of final victory… —POPE JOHN PAUL II, Angelus, March 14th, 1999

This final victory which ushers in the Day of the Lord will also release a new song, The Magnificat of the Woman-Church, a wedding song that will herald the return of Jesus in glory, and the definitive coming of the eternal Kingdom of God.

If before that final end there is to be a period, more or less prolonged, of triumphant sanctity, such a result will be brought about not by the apparition of the person of Christ in Majesty but by the operation of those powers of sanctification which are now at work, the Holy Ghost and the Sacraments of the Church. —The Teaching of the Catholic Church: A Summary of Catholic Doctrine (London:Burns Oates & Washbourne), p. 1140